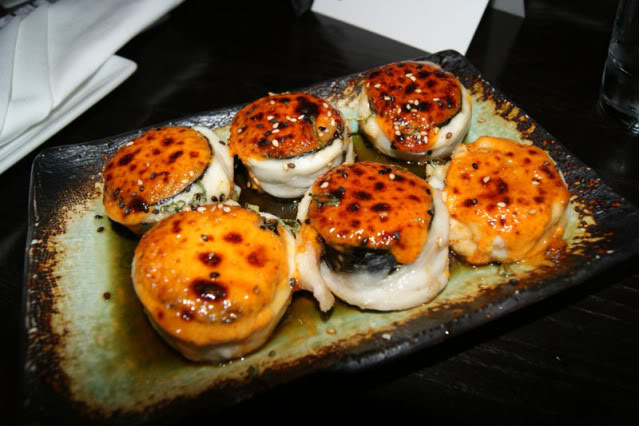 The first time I went to Dragonfly was during their grand opening night over a year ago. Upon arriving at their restaurant (in the Vellagio plaza on Orlando’s Restaurant row (Sand Lake Boulevard / Dr Phillips area), I immediately thought I had just entered a swanky night club: large sweeping white curtains surrounded the restaurant and inside, dark reds and dim lighting set a urban, modern feel. The place was packed with well dressed young professionals and the air was filled with a DJ’s loud dance music, making it hard to hear yourself think or even order anything. (Apparently Joey Fatone, Orlando’s hometown boy and of NSYNC boy band fame, hosted a charity event that night in conjunction with the grand opening.)

It was pretty chaotic to be honest and my partner and I thought it would be best to come back another night when they were more settled in.

Recently, I had the opportunity to come back to Dragonfly for a dinner with a group of my friends and brothers who decided to have their annual end of the year dinner there.

This time was much better. The servers were attentive and aware. There wasn’t any over bearing loud music. Dragonfly was in harmony, the feeling of a cool and confident modern lounge.

Dragonfly calls itself a modern Izayaka which “a type of Japanese drinking establishment which also serves food to accompany the drinks”. They are popular, casual places for after-work drinking, often with grilled foods on the side that you eat with the drinks.

I thought it was a tad pricey for my budget especially considering the amount of food that you get with the price tag. I ordered the Crispy U-10 Shrimp with yuzu-garlic mousseline & candied walnuts and garnished with scallions, toasted sesame seeds & jalapeños. But for $15, which although tasted quite wonderful, did not seem to warrant the price of $5 per shrimp.

I also ordered the dragonfly roll which came with tuna, albacore & wrapped with grouper and baked with spicy sauce then topped with scallions & finished with eel sauce. It is one of the more popular rolls here, but I thought the roll lacked flavor and had too much rice. Rice to fish ratio is very important to me when ordering sushi.

I would give Dragonfly another try but sadly I was unimpressed with their offerings on this evening. The place looks beautiful on the outside but when you look in, you find there is much lacking in terms of cuisine. I would like to go back to try their robata grill however as that is pretty unique here in Orlando.