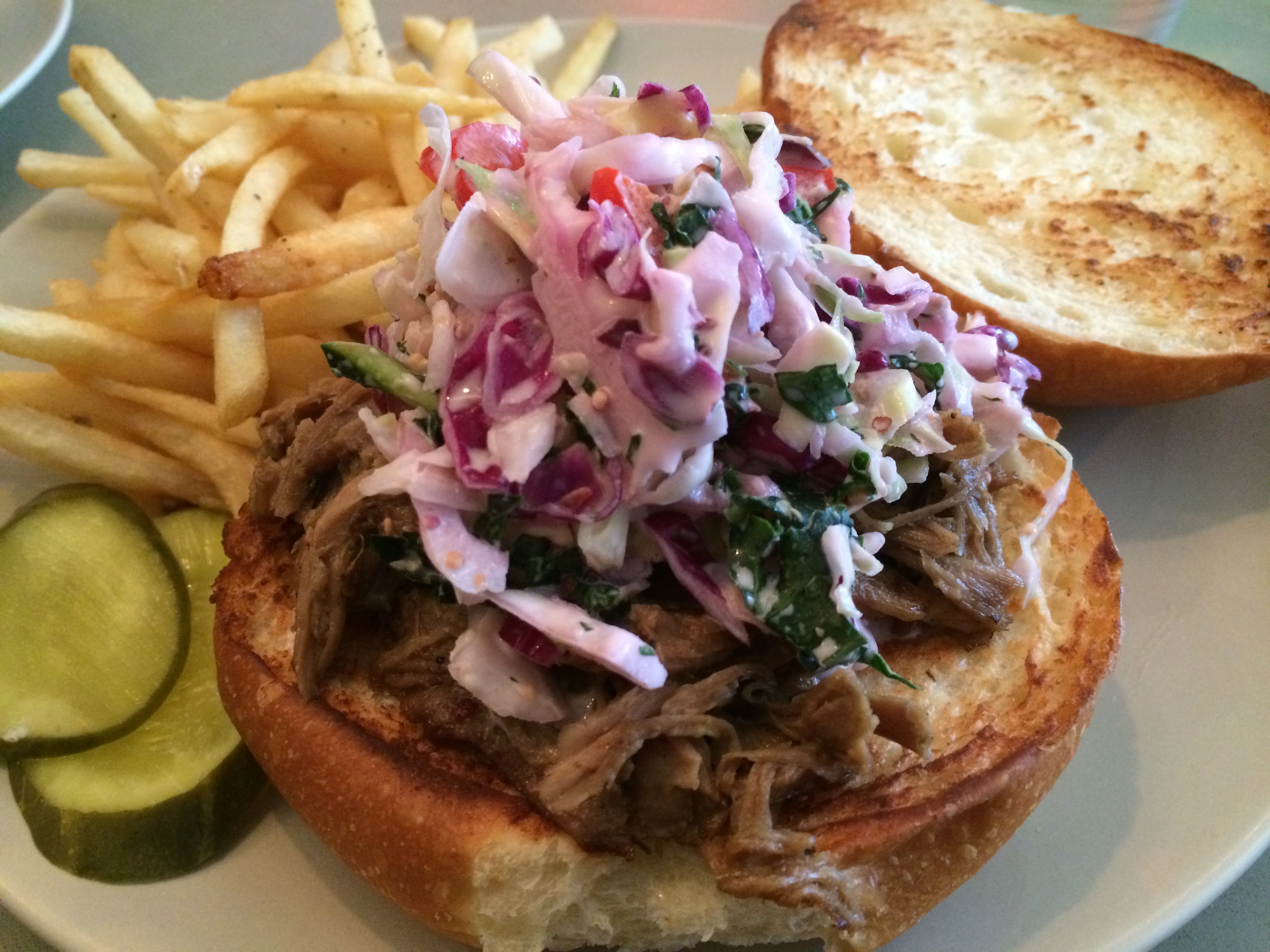 Taking its place on the corner of Mills Avenue is The Strand – a hip, yet humble new concept featuring a menu of American classics with a modern twist. From my visit, it seems like they are undertaking an ambitious feat considering the small kitchen space that still hearkens back to its diner days – ultimately, despite a small kitchen, The Strand weaves together dishes with a lot of heart. 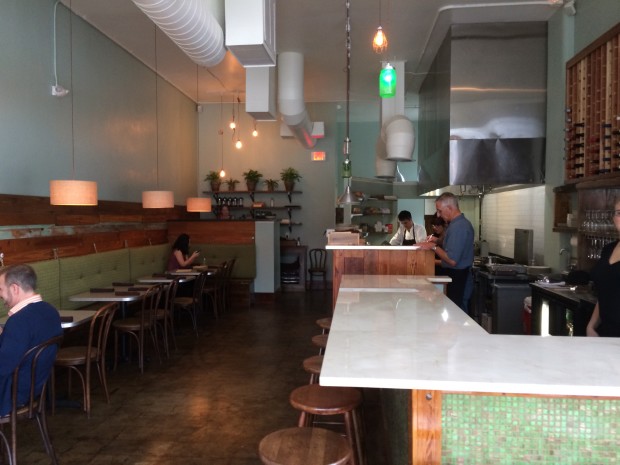 The name, The Strand, represents the restaurant’s hope to be a thread forming a unity with a larger weave in the Orlando community…a philosophy that reflects the intricate diversity of the Mills 50 district itself. All different parts and “strands” making up the same fabric.

The menu is small, featuring less than 20 items, but it helps to keep everything in focus especially in the early days of the restaurant. Don’t want to be overly ambitious and fail to execute properly, especially for a small kitchen. So do a few things and do them well – and that is what they succeed at during my visit with a few dining companions. 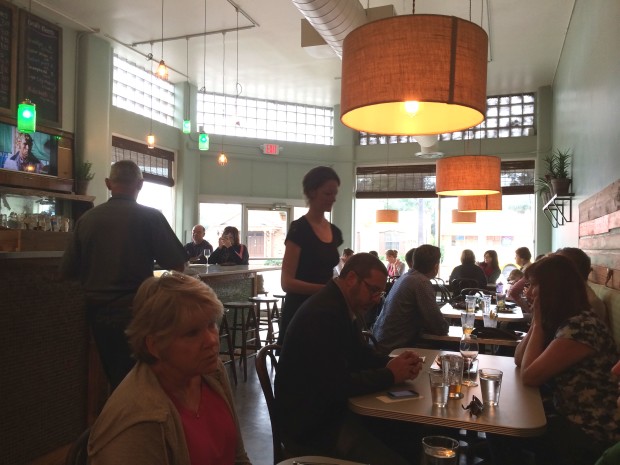 It was Friday afternoon for lunch, and it seemed a bit empty at first in the small dining room, which feels a little like visiting a diner mixed with an old friend’s city apartment dining room in a way.

Soon after we sat down, the crowds began to pour in, filling the restaurant with ladies lunching, co-workers meeting up for a bite, friends catching up, all walks of life in the community taking up seats until there was a small waiting area that formed near the bar area. That’s one thing about the ritual of eating – it’s not just about the food we eat, but also the friendship and fellowship of those with whom we eat.

My dining companions and I of course wanted to try a little everything on the menu so we ordered three different things to split and share. 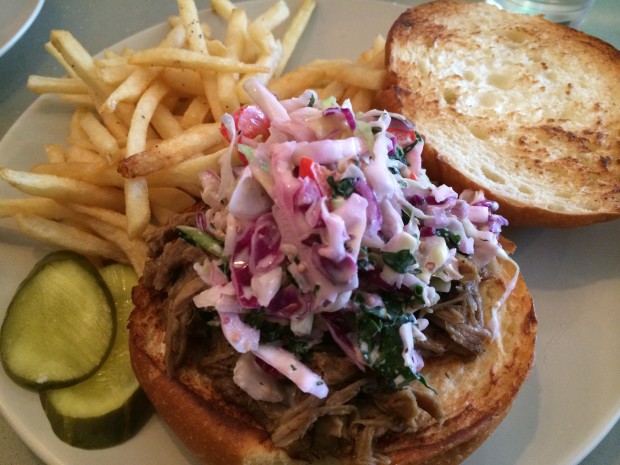 For my lunch, I ordered the “Porkzilla”, a rather tame pulled pork sandwich that tasted quite delicious, topped with kale coleslaw on a toasted brioche bun and served with a side of fries. The waitress told me that there was a pineapple glaze to the pulled pork, but I could not detect it and it would’ve been a nice touch to have the pork a little less dry.  The fries could use some nice spice to make it stand out more, but it did have a nice crisp texture to it. 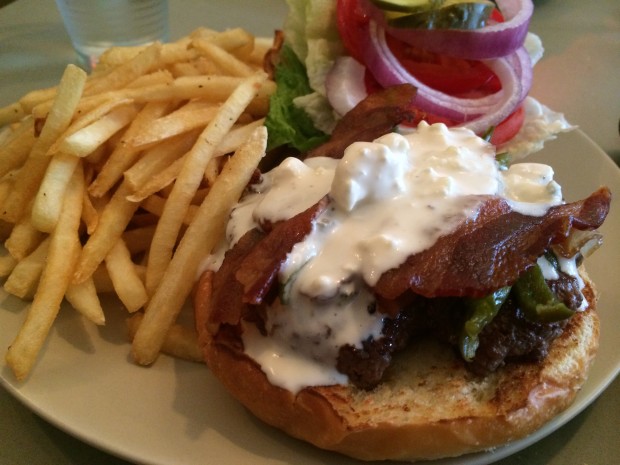 One of my dining companions ordered the signature “Strand Burger”, a solid burger topped with bacon, blue cheese dressing, the standard lettuce, tomato, and onion, and a little less standard, roasted jalapeno that gave the burger a nice spicy, and unexpected, kick. 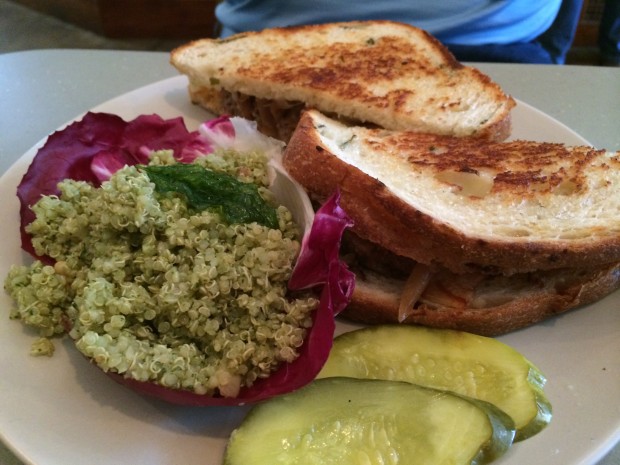 The Grilled Meatloaf Sandwich with pesto quinoa side

The favorite of the bunch was the “Grilled Meatloaf Sandwich,” a thick cut of savory, gloriously-diner-greasy meatloaf stuffed with pimento cheese and sautéed onions sandwiched between potato-chive buns with a refreshing quinoa pesto side – the daily grain.

Service was good, though needed a little bit more time on training and communicating between the servers as things got a little confusing with two servers coming by asking the same questions, but  very friendly and accommodating.

Overall, very impressed with the offerings at The Strand, and would definitely return again and again. 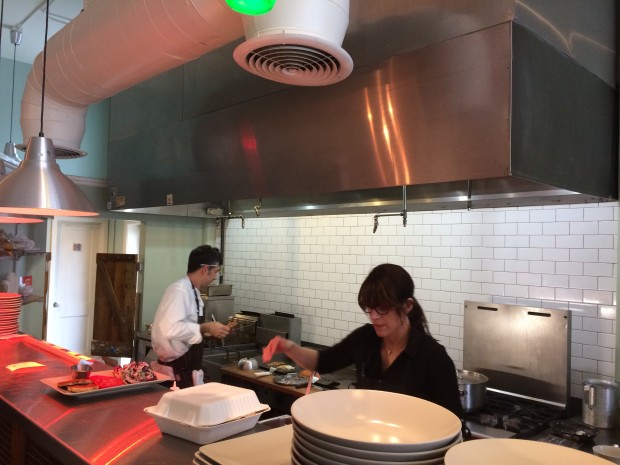 The open humble kitchen at The Strand 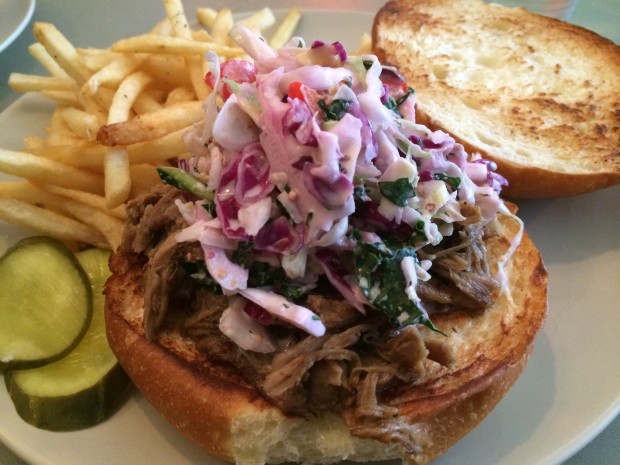 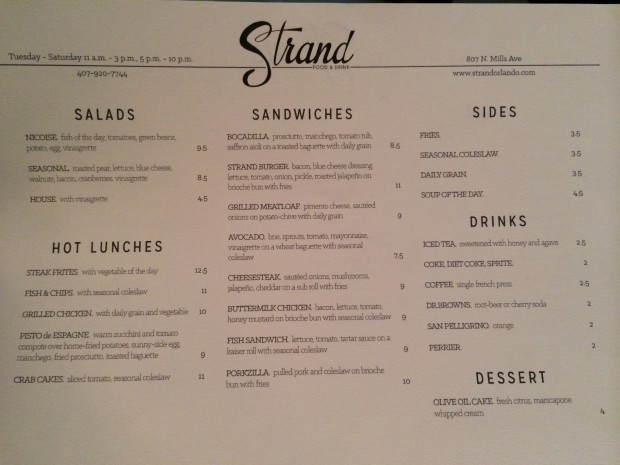