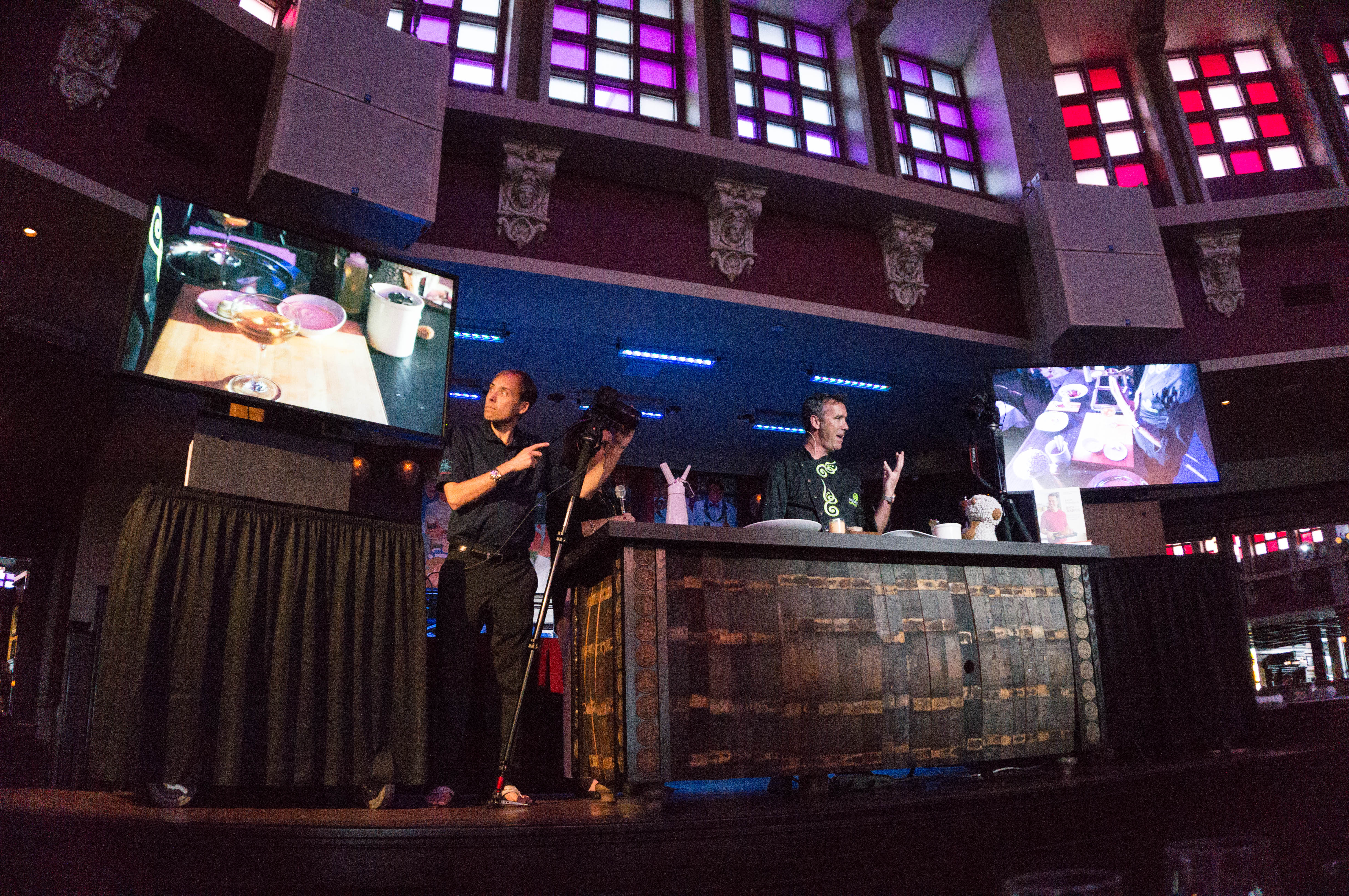 I had an amazing opportunity to come back to Raglan Road  to meet celebrity chef Kevin Dundon– famous for his five-star hotel and cookery school in Ireland and his award-winning PBS and Create TV cooking series.

As seen from the picture above he showcased his cooking and charm as he walk us through the dishes we were going to sample that evening. 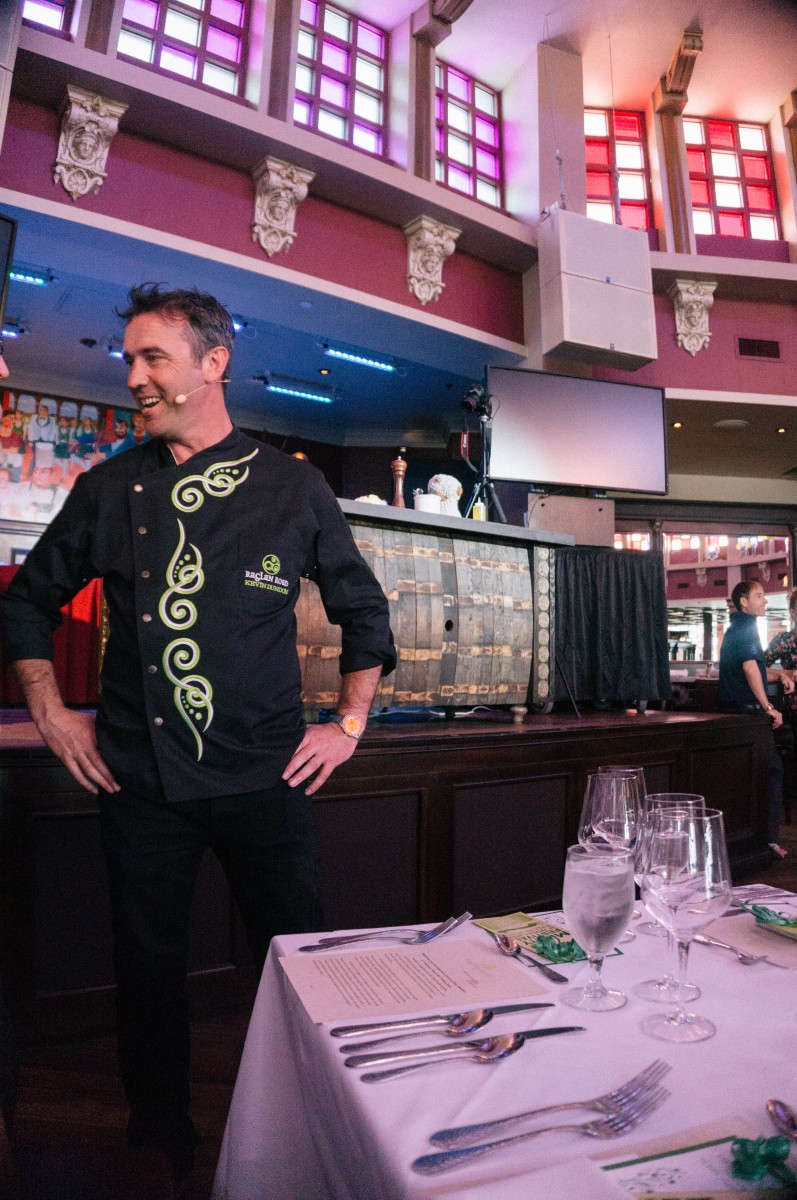 Starting off with: Coquille St. Jaques

The scallops are dry packed, allowing the scallops to be fresher and withhold an intense flavor versus the frozen ones where all the flavor is released with the water when thawed. It’s then simply seasoned with a little oil, a little salt, and then left to sit to caramelize in the pan.

The scallops had incredible texture, as it was not too mushy or tough, but rather soft. Since it was only enhanced with salt, the true flavors of seafood really came through. 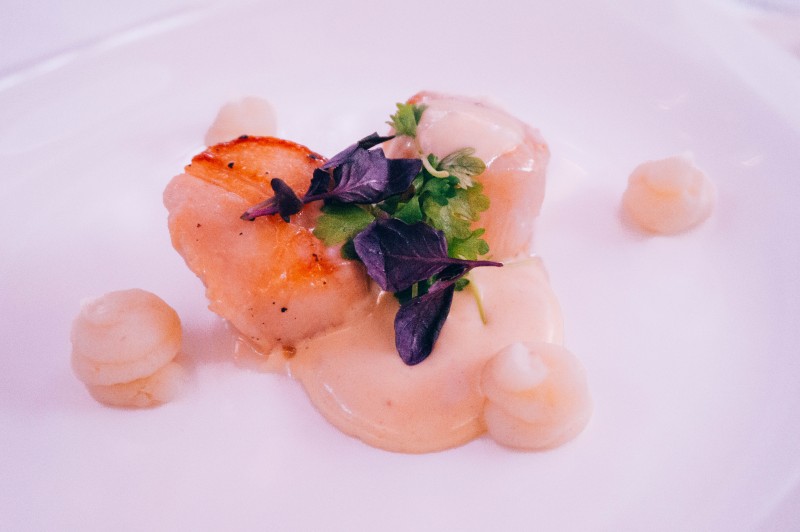 This crisp and dry wine had a thicker viscosity that goes along very well with seafood, especially scallops. 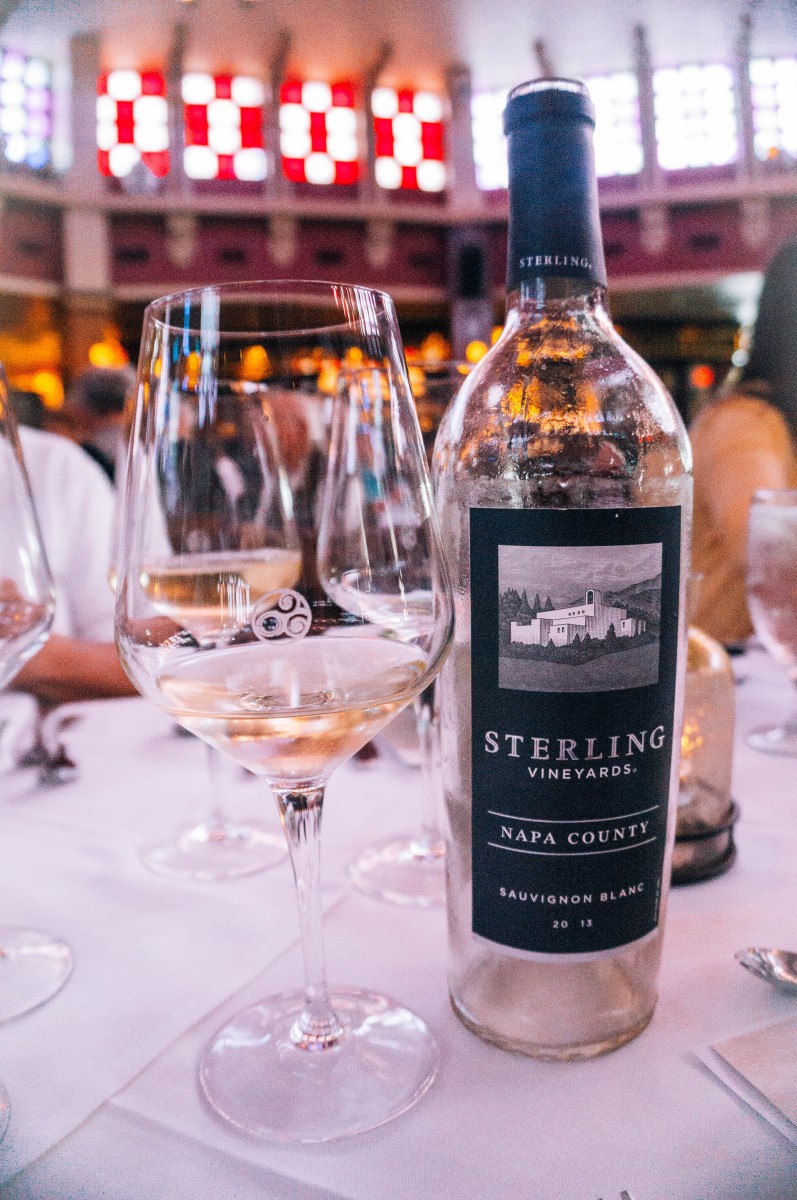 Next we have: Duet of Tomato Soup and Champagne Splashed Oyster

Ripe Roma/ Plum tomatoes were used in combination with onions, garlic, a pinch of salt and pepper and then deglazed with Gin. Then chef Dundon upped the decadence of the soup with a generous amount go heavy cream and butter. The super smooth shot of soup was then accompanied by fresh raw oyster. 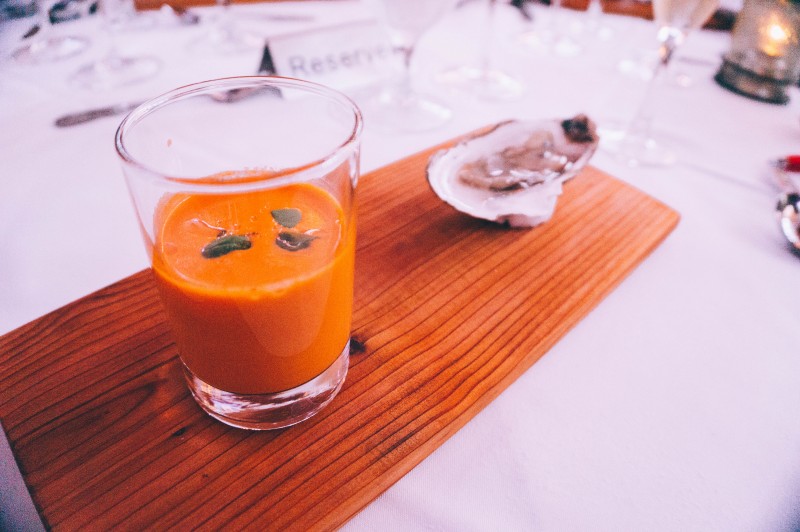 paired with: Chandon Brut Champagne
It delivers complex flavors of apples and pears, and accented with citrus spices. The win had a refreshing and dry finish. 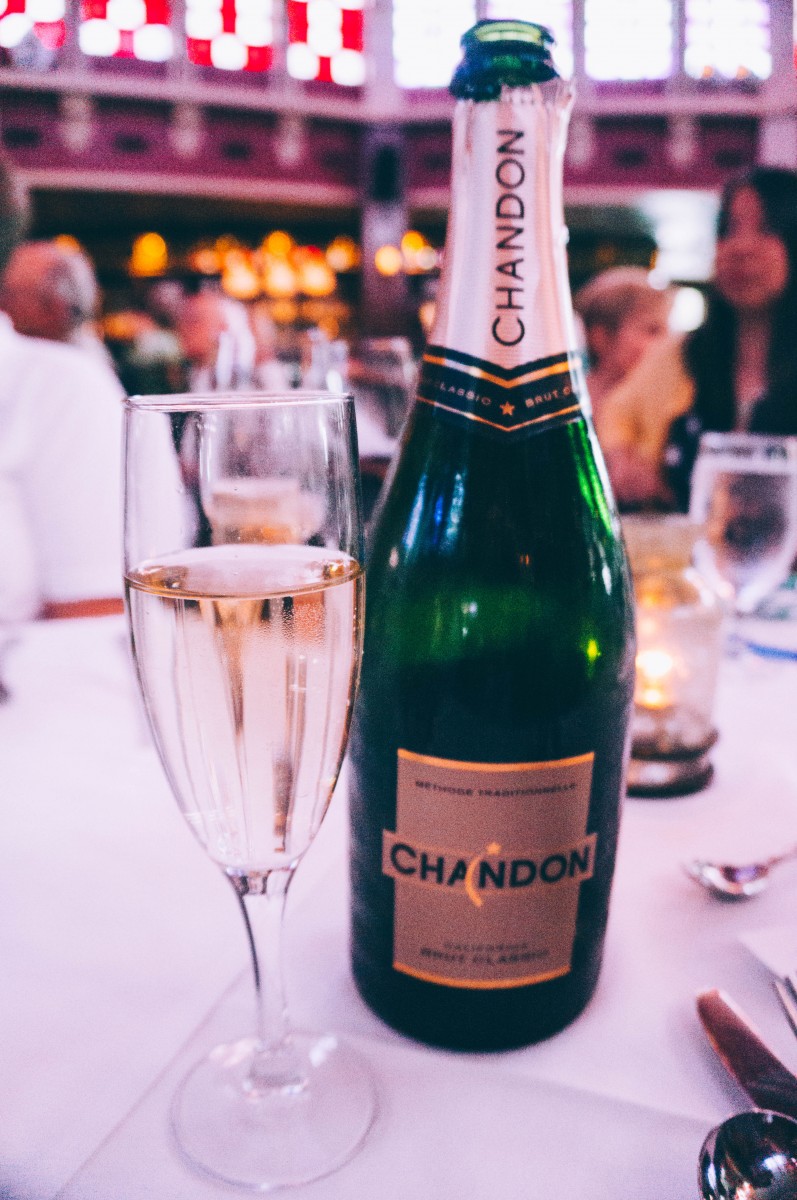 Moving onto the dish that according to Chef Dundon- truly represent his cooking: Roast Rack of Spring Lamb

Scrag end of neck of lamb with leeks, baby potatoes and carrots in Irish stew consommé.

Tender lamb that’s roasted to a perfect medium (the recommended state for lamb, otherwise it would be too chewy or tough. I’m usually not a fan of lamb due to it’s pungent grassy flavor, however this particular dish made the lamb flavor quite mellow . Also, I preferred eating each bite of lamb with the leek julienne, it really helps when you’re not used to eating lamb. 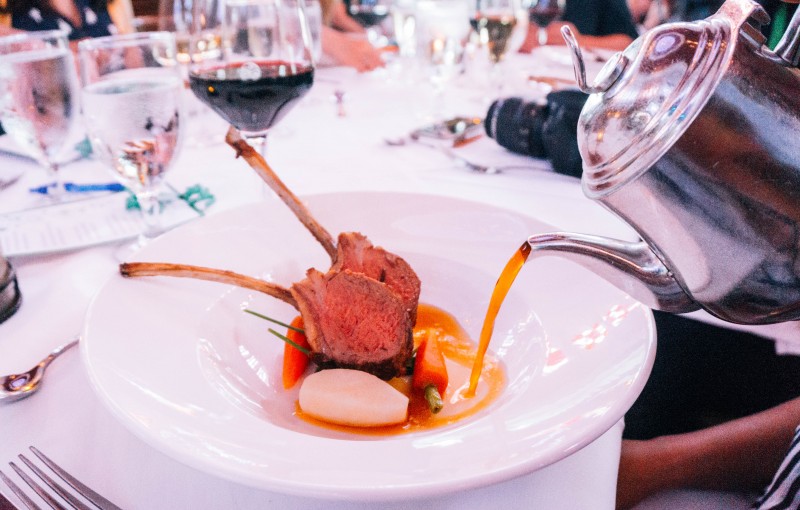 it was complimented with a glass of : B.V Rutherford Cabernet

A smooth, smokey red with deep flavors that brings out the savoriness of the broth and the roasted lamb. 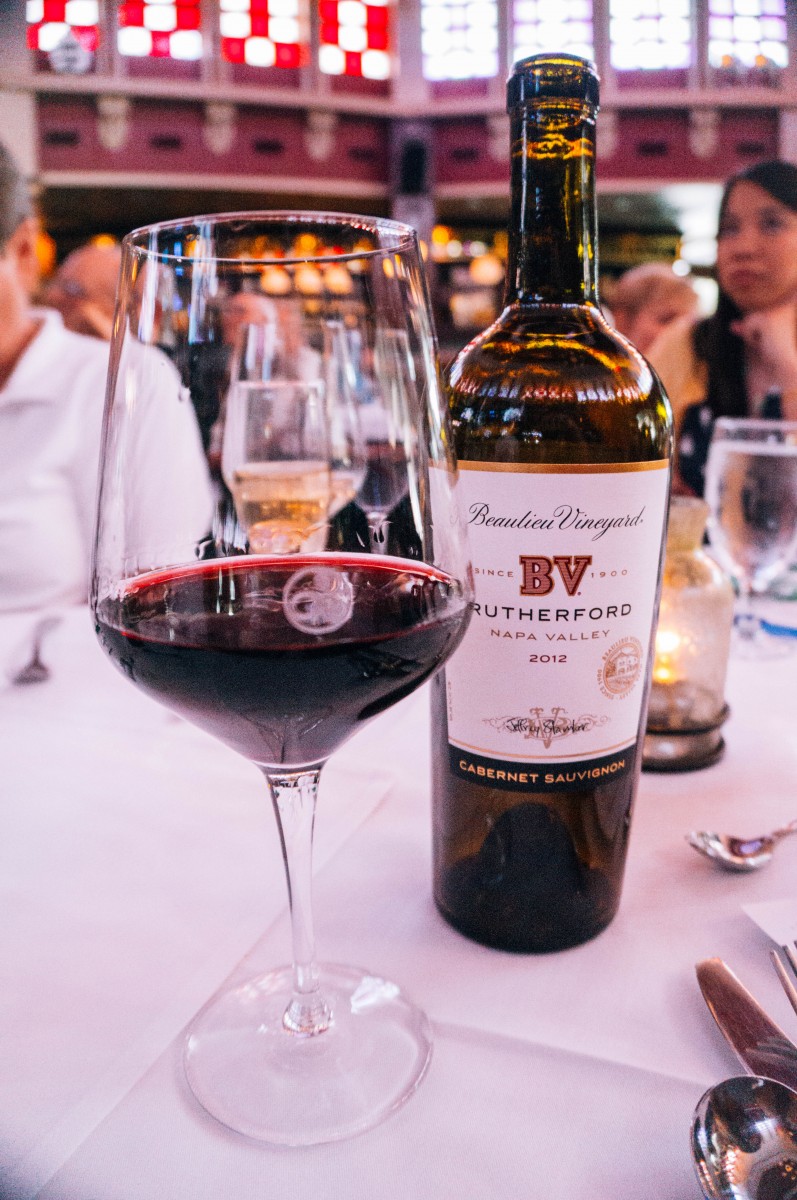 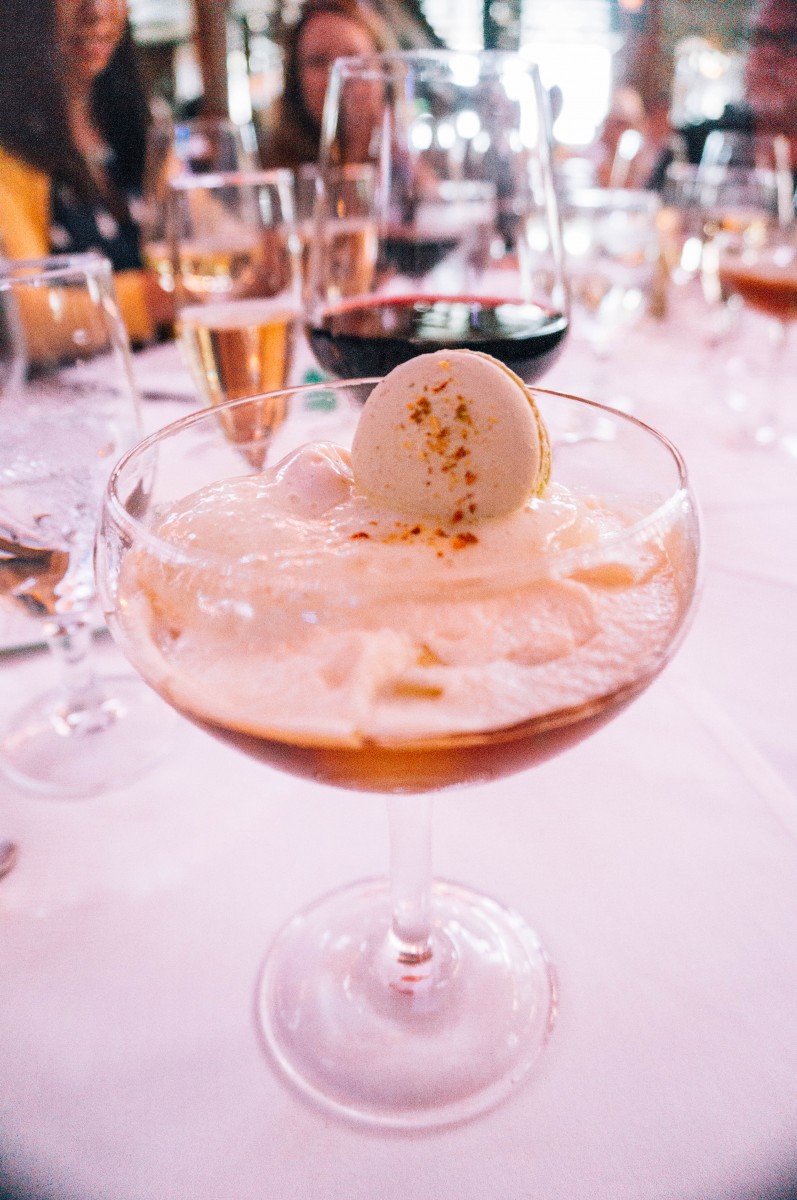 Chef Dundon’s dishes all have a common theme, simplicity.  They’re beautifully crafted, without the intentions of being complicated to bring out the true flavors of the ingredients.

*Also, don’t plan on counting calories when tasting these dishes – as a lot of delicious butter are used.

I was even lucky enough to be gifted with one of Chef’s cook book: Chef Dundon’s “Back to Basics” and got it signed! 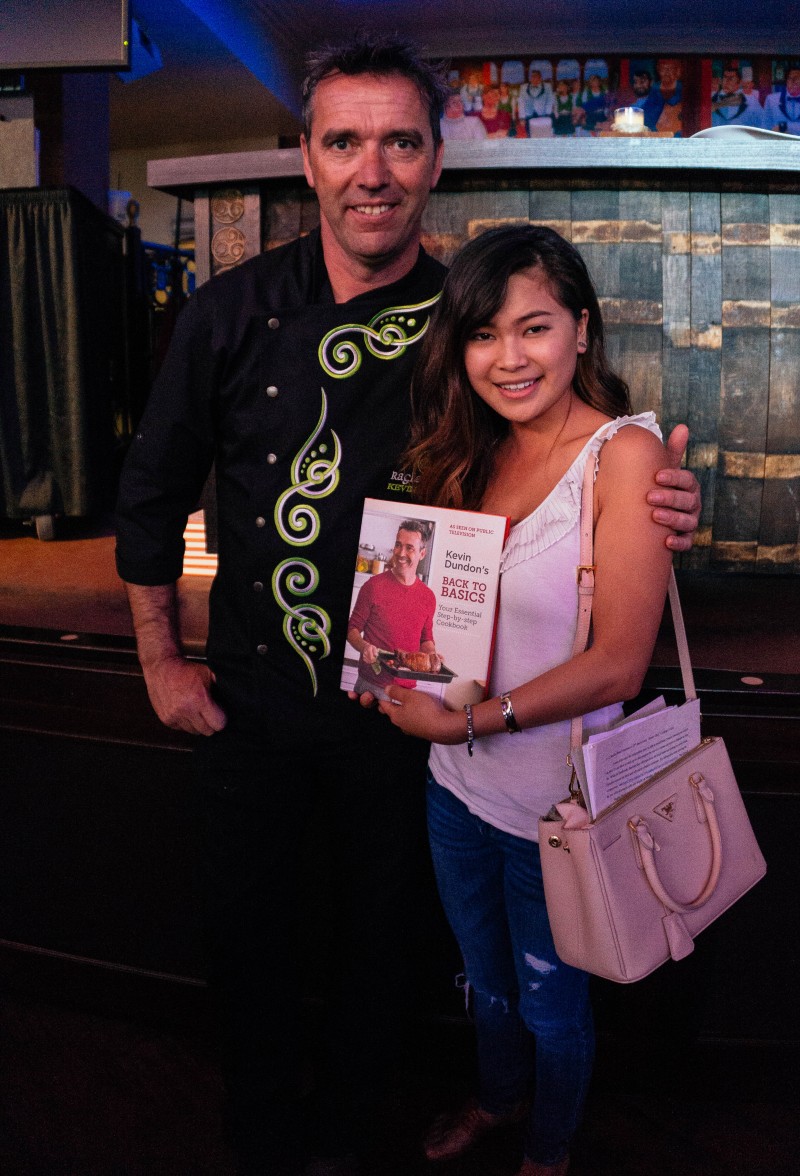 A little something extra:

1. Heat the oil lightly
2. Add in the onions and cook over medium heat until translucent
3. Add in the garlic and sweat for about 2 minutes
4. Add in the tomatoes and pinch of salt and pepper
5. Cook for 6 minutes stirring
6. Deglaze with Gin: Cook stirring for about 7 minutes
7. Add in Stock, bring to a boil, lower to a simmer and cook for 20 minutes until tomatoes are very tender and broken up
8. Add in the heavy cream, bring to a boil and cook for 8 minutes
9. Adjust seasoning with salt and pepper
10. Remove from the fire and puree with a hand blender until smooth and then strain
11. Serve hot, garnish with creme fruit, crostini, and snipped chives. 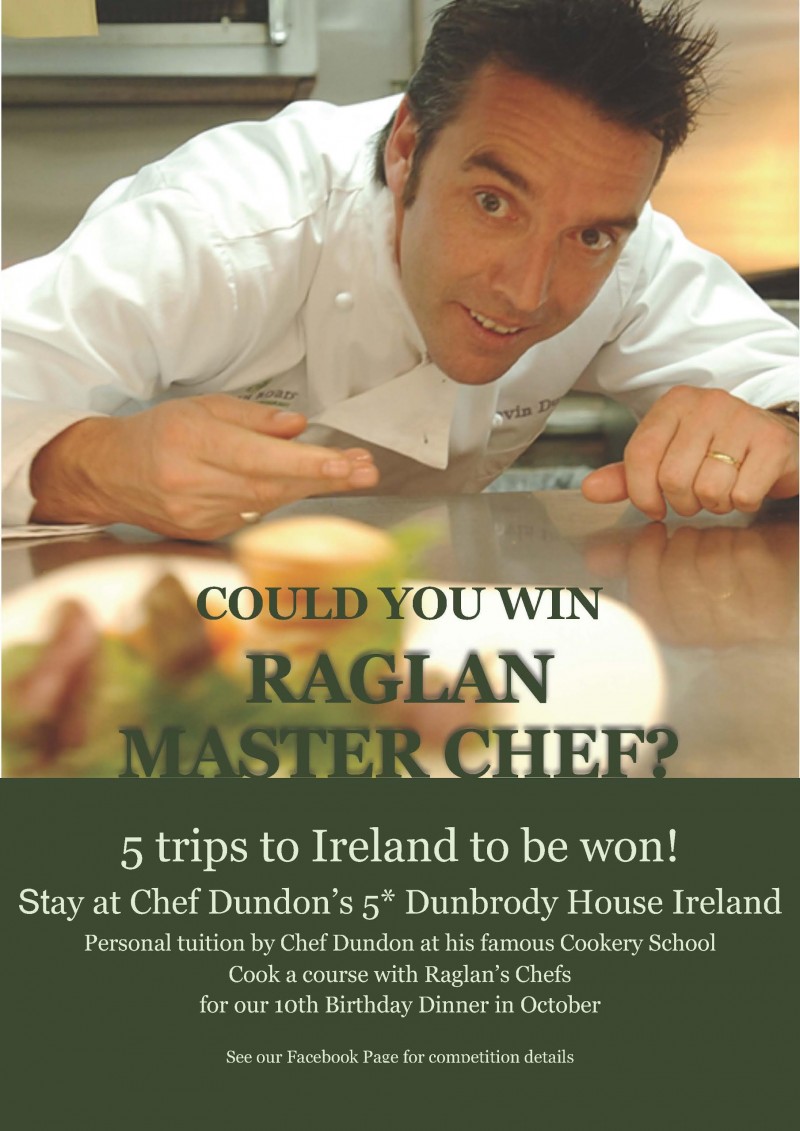 The finalists will fly to Ireland May 21, all expenses paid, where they’ll stay at Dundon’s popular resort and cooking school, Dunbrody Country House Hotel in Southwest Ireland, and work with Dundon to perfect their cooking technique. Each of the finalists will cook a dish chosen by Dundon on Oct. 20 at a private 10th anniversary celebratory dinner at Raglan Road, an award-winning restaurant owned and operated by Irish partners that features several dining rooms of aged walnut and mahogany wood furnishings from old Irish bars and churches that were shipped to Orlando to build the restaurant.

Guests who enter the competition must be able to travel from Orlando International Airport on May 21 and have a valid, up-to-date passport for travel to Ireland and return to Orlando on May 26. While in Dunbrody, finalists also will experience the local farms and fishing locations where Dundon sources his food and will enjoy a Dublin excursion. For information about entering the competition, visit http://www.raglanroad.com/raglan-road-master-chef-competition.

The site will be live with all contest rules and details on Monday, March 16, 2015.
Raglan Road features inventive cuisine by Irish celebrity chef Kevin Dundon, host of the TASTE Award-winning PBS and Create TV cooking show, “Kevin Dundon’s Modern Irish Food.” The second season of Dundon’s TV series, “Kevin Dundon’s Back to Basics,” will premiere nationally March 13 on public television’s Create TV. The network also will air a Kevin Dundon marathon of select episodes of “Back to Basics” and Dundon’s first season episodes of “Modern Irish Food” March 14 and 15 leading into St. Patrick’s Day.
During any visit to Raglan Road, guests can belly up to one of the restaurant’s 130-year-old imported-from-Ireland bars or grab a table for authentic fare. The restaurant, winner of numerous national and local awards and honors, is known for its beer-battered fish and chips, as well as its Shepherd’s pie with a contemporary twist and other popular entrees. Raglan Road offers gluten-free items including scallops, fish and chips, onion rings and pasta dishes.