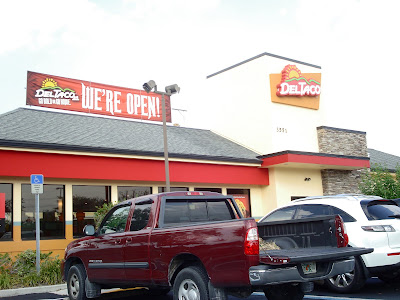 There’s a new ranchero in town and his name is Del Taco (literally meaning “Of the Taco”). Taco Bell has some competition to contend to with California-based Del Taco which is also 24 hours a day (even if its only store in Florida is in Oviedo). Del Taco recently moved in where Fazoli’s used to be off of Red Bug Lake Road near the Oviedo Marketplace. This is the first Del Taco to open in Florida in the past few years and it is a welcome sight to see culinary options expanding here in Central Florida even though it may be considered by many as “fast food”. Food like this is meant to be fast though right? 😀 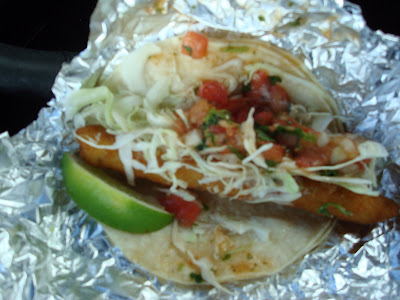 Fish Tacos originated in Baja California in Mexico.
I order the fish taco ($1.45), a big fat steak taco and big fat chicken taco ($2.09 each) and a churro to go (all adding up to about $7.45). Having only been opened a few weeks I could see the drive-thru service still had some kinks to work out as the computer order screen was apparently off-line and there was quite a car line waiting out the drive way.

The fish taco consisted of a fried fish fillet, crunchy cabbage, pico de gallo, and a sour cream/ citrus/mayonnaise sauce, all placed on top of a corn or flour tortilla and served with a slice of lime. The fish taco was just the right portion and had a zesty savory taste. Not too bad for starters. As Del Taco’s motto says “Go Bold or Go Home.” 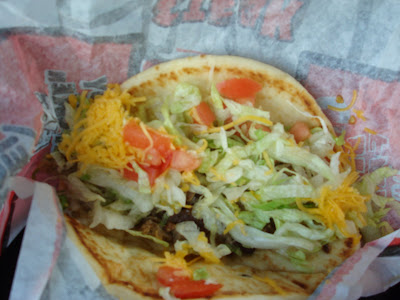 My second item was the big fat chicken taco which consisted of a lot of lettuce, some shredded cheese, tomatoes, and grilled chicken on a taco bread. The bread was soft and sweet, the lettuce and tomatoes were fresh, and the chicken were succulent, tasty morsels. Definitely a tasty chomp!

The churro was a great end to the meal. Churros are typically fried until they become crunchy, and then are sprinkled with sugar. The churros at Del Taco are soft and warm, a sweet dessert to entice the tastebuds adieu.

Other items on the Del Taco menu include breakfast items such as steak and egg burritos, big fat breakfast taco, as well as a “American” menu with cheeseburgers. The super-size option is called “Macho” as in Macho Nachos or Macho Tacos or Macho Burritos.

Overall Del Taco in Oviedo is a slight step above Taco Bell and the prices are definitely not a issue. I think a little work on the service and it will do just fine here in the Orlando food scape.

Del Taco has announced the opening of its first restaurant in Florida as it begins its move to become the local favorite Mexican quick-serve destination.Del Taco franchisee Floridel LLC will open the first of 10 Del Taco restaurants planned for the Orlando area.

The first location is at 3551 Dovera Drive in Oviedo.Founded in 1961, Del Taco operates or franchises more than 510 restaurants in 17 states.