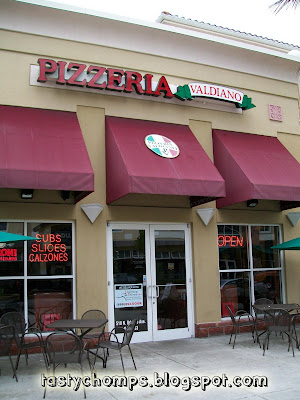 A man (imagine one of those guys from Sopranos) stands behind the counter, behind the glass cases displaying the specials of the day, resplendent pizza pies and strombolis, sicilian style grandma pizza slices and more. He asks in a Long Island accent, “what would you like to order today?”

Despite his looks, he was more considerate and especially attentive to our orders than what may at first appeared.

Something about the place reminded me of being transported back to the time when the first Italian immigrants came to America and brought with them the old world pizza and began transforming it into a distinctly American icon. The place is Pizzeria Valdiano at Winter Park Village, right next to the Winter Park Regal Movie Theatre.

I thought to myself that this place, this finally would be the place where I could come again and again for a slice of pizza pie heaven, after being disappointed for years with pizzas that were overly greasy, whose crust tasted as though they were made with cardboard scrapings, and tomato sauces straight from a can.

But I had no idea at the time.

I tend to prefer the Chicago deep dish style pizza and for a moment contemplated going for the Sicilian, a deep focacia style version, but after reviewing a menu that boasts over 30 Specialty Pies, I finally differed to the traditional pizza pizza, regular New York style.

I ordered the Pizza Valdiano ($3.25) and the pizza maker simply and quickly whisked the pizza into the hot baking oven and within a minute the pizza was ready. It looked so simple and easy and yet the tastes that were to come were completely infinitely times more complex. 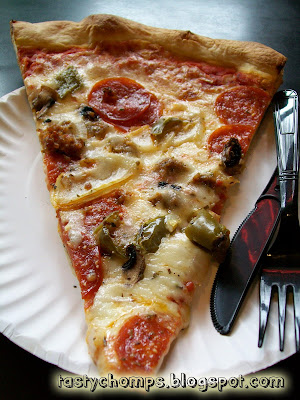 Sausage, pepperoni, meatballs and green peppers, mushrooms and onions laid on the exquisitely melted mozzarella. An exact amount of oil was used, not too much that it would overly grease the pizza, but just enough to dance with the dough making it a perfect balance for the crust. 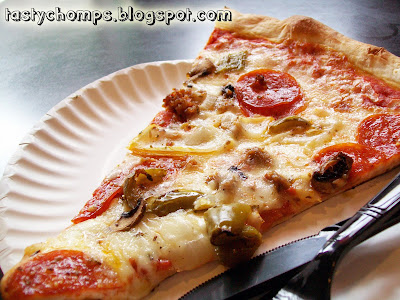 The crust was particularly crispy yet fluffy at the same time making it incredibly delicious. The smell of the pizza was absolutely intoxicating.

The pizza here was something special.

In addition to the pizza, I ordered the pasta of the day ($7.95): “Tortellini Primavera” (primavera means spring in Italian) 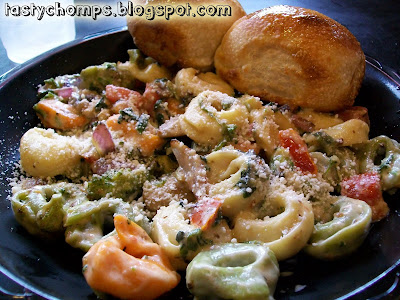 The legend has it that the tortellini came into conception after a man looked upon a beauty’s keyhole in an inn, and all he saw was the woman’s navel (she turned out to be Venus, the Goddess of Love). The man rushed to the kitchen in ecstasy and created the tortellini in its image. Kind of creepy, I know, but it still made for a great pasta design?

The tortellini was filled with mozzarella and served in a light creamy alfredo sauce ripe with plum tomatoes, red and green and orange peppers, red onions, minced garlic, fresh sliced mushrooms and chopped spinach topped with parmesan grated and two garlic rolls brushed with olive oil on the side. A satisfying meal for the palate and the heart.

On my way out the man asked how things were.

I told him truthfully,