By Ricky Ly
Jul 27, 2009
In
New York CityTravelsUncategorized
Share
Facebook
Twitter
Pinterest
WhatsApp
Linkedin
ReddIt
Print
5621
After Gray’s Papaya, we hop on the subway to head north towards Midtown where we will meet up with a few alumni for a summer dinner at the all you can eat sushi buffet at Ichi Umi (formerly Todai) in Koreatown. It is around 5 pm at this point on Friday July 18 2009. Five hours of eating and we won’t stop, can’t stop. Although Andrew is in a food comatose state, we are still truckin!

Along the way we stop by a couple places including Woorijip, a fast food convenience store for Korean food. I stepped inside to check it out and was delighted to find what was within.

Woorijip is basically formated as a open grocery store where you can by pre-made Korean staples. Including:

A glorious display case of alcoholic and non alcoholic beverages.

People scuttling about and wondering what they’d like to get?

Cheap, fast, all you can stuff down Korean bibimbap, kimchi, bulgogi, korean goodies everywhere! No wonder Woorijip was the winner in Midtownlunch.com‘s Best Cheap Korean.

A few doors down was a dumpling place that had been on several books and lists, however I found it to be disappointing!..gah.

Located in Koreatown, Manhattan on West 32nd Street, Mandoo Bar is almost a strictly dumpling place. At the window, elderly ladies dutifully fold pork fillings into the dumpling skin and get them ready to steam right at the counter. 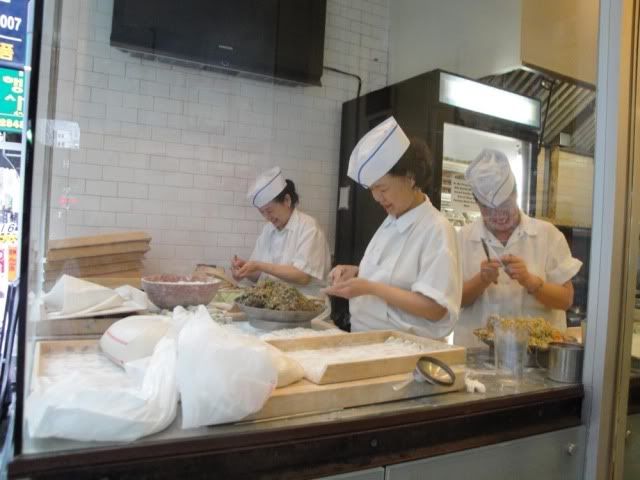 These ladies showcase their goods: Mandoo or Korean dumplings.

The dumplings are color coded: these are seafood dumplings.

The flavors range from kimchi to pork to vegetables. I was disappointed to find that I couldn’t get a small mix of all three to go, and so had to settle with just the pork dumplings.

The pork dumplings, compared to Prosperity Dumpling‘s were abysmal. The skin was too thick for my liking and the pork meat was a bit bland. To top it off the dumplings cost about $6.00 for 5. I could have had better dumplings for a fifth of that cost in Chinatown…

The last time we were in Koreatown, we ate at BCD Tofu House which had ten times more amazing mandoo (dumplings).

Maybe I am spoiled by all the dumplings I have had the good fortune to try during my years. But its not that hard to do it well and if half your name is about the meat/veggie filled dumplings, it better be damn good.

Sad to say it but Mandoo bar was not to par.