The conference began early Saturday morning in Flushing, Queens borough of New York City. Since I am an alumni and didn’t need to go to some of the workshops, I decided to take a gastronomical tour of eats in downtown Flushing near the metro station. I mostly used a guide from chowhound.com as well as this map from the New York Times of Eats in Flushing and the NYTimes article “Finding Beijing in Flushing”

My brother, Eric Ho, and I rode the Q65 from Jamaica Hills to Flushing which took about 20 minutes and stopped right off of Main Street. The first place we went to was the “Golden Mall” which contained in its basement a smorgasbord of Chinese street food style vendors.

First, we stopped by Xian Foods, a small stall in the center of the Golden Mall basement. Xian Foods was actually featured in the NY times article and even visited by Anthony Bourdain before. The city of Xi’an, located in Central China and one of the oldest cities of China, was home to the imperial tomb of the first emperor of China Qin Shi Huang and his famed terra cotta warriors.

Eric and I decide to split a spicy lamb burger ($2.50). The lady at the counter takes out a piece of frozen lamb meat from the freezer pre-prepared and sets it onto the sizzling pan on the stove in the back of the stall. I was hoping it would be fresh rather than frozen but you can’t expect much when ordering from a basement stall. There were also a few other stalls there in the basement of the Golden Mall, but I did not know what to get as the signage was all in Chinese and I also didn’t want to have to go “flushing” after wards (if you get what I mean).

The lamb burger was wedged between two slices of bread roll, and had a spicy gamey taste to it made with cumin and pepper. Ah, the perfect way to start a morning in Flushing. Overall I would give this lamb burger a 4 out of 5 tasty chomps….

“The Golden Mall” – not really golden nor a mall

What does it say? Who knows? I just want to eat!

Xian Foods stall, in case you are ever in the Golden Mall basement

the Lamb burger is complete!

The Sun Mary Bakery is located right off of Main Street on 41st st. We get a few bakery items such as egg custard, pineapple bun, and the taro ball. I liked the egg custard the best because of its flaky, pastry crust, something that many egg custard places neglect to perfect. Overall, this is a 4 out of 5 tasty chomps!! 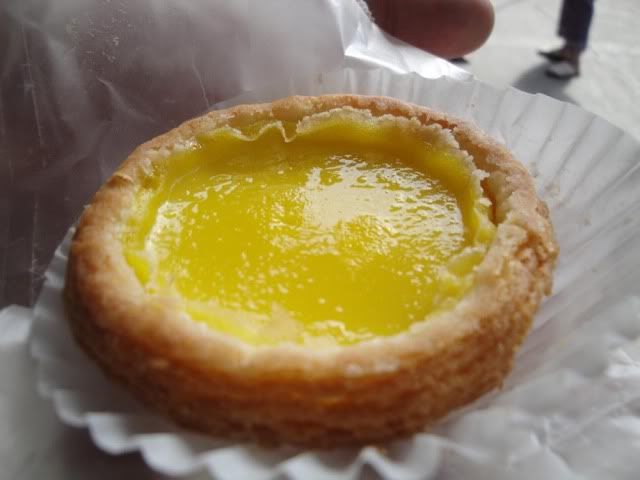