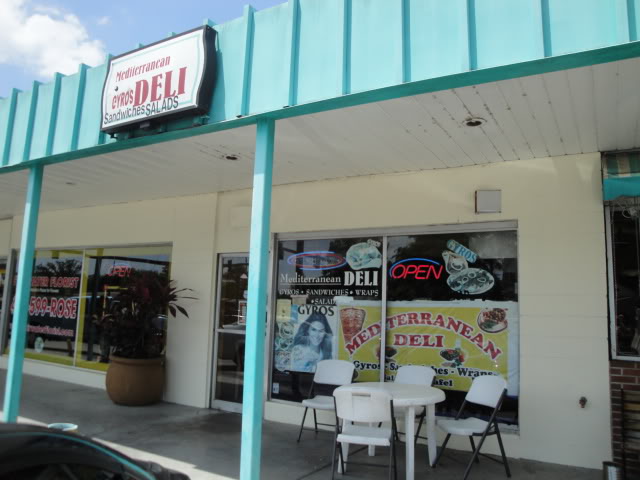 ***I was tipped off about this great little place from a reader of Tasty Chomps, thank you Hannah!
http://www.myspace.com/med_deli

Located at 981 W. Fairbanks Ave. in Orlando on the corner of Adanson and Fairbanks, between I-4 and Edgawater Dr., Mediterranean Deli is the definition of a true hole in a hole in the wall. Inside, the restaurant is tiny with only about 10 seats and with half the place taken up by the counter. Giant travel photos of ancient cities in the Middle East adorn the walls and a small cd player bellows out belly dancing and Arabic music in stereo sound. Attending the restaurant is the happy-go-lucky Lebanese owner who cheerily greets each guest and addresses them by the familial “brother”, prepares the ordered meal, and also serves as the cashier, a non-stop one man army operation. He really has one of the best attitudes I have seen in the restaurant industry, very positive and friendly and warm.

Two rotisserie sticks of shewarma meat rotate around a heat source waiting to be carved for consumption. Trays of various salads and sides from hummus to grape leaves to greek salad and shirazi and tabouleh all along the counter.

The favorite item at Mediterranean Deli is the gyro sandwich, the item which Hannah originally referred to me here as the best gyro in Orlando, the item which I dutifully order this afternoon.

The gyro is prepared in a wonderfully fluffy pita bread with fresh lettuce and tomatoes and a delicious sour cream along with generous heapings of freshly grilled gyro meat. It really lived up to its reputation as one of the best gyros in Orlando, and certainly it was one of the best I’ve had in my relatively short life time.

Gyros are my hero

I would definitely come back again for this great gyro! my hero.