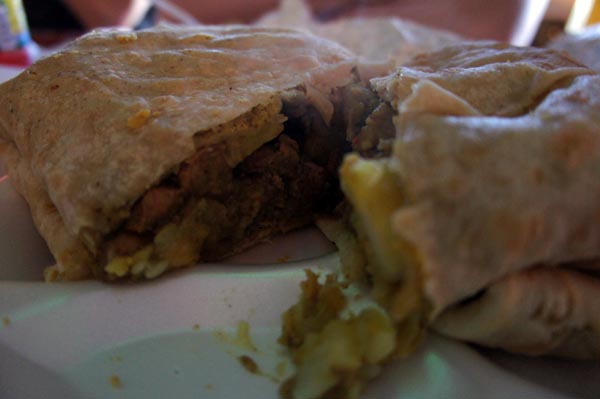 A Trinidadian family sits around a table enjoying their hot lunch while Bollywood musical remixes play on the television sets. An ornate, grand chandelier hangs from the center of the dining room lit by green and pink neon lights, and in the back, behind steamed counters, there are heated trays of curry goat and duck and Chinese fried rice waiting for your order.

For those adventurous foodies, Singh’s Roti Shop offers its West Indies cuisine (particularly deriving from the tropical island-nation of Trinidad) inside a gated plaza off Kirkman Road and Old Winter Garden Road in West Orlando, where most of the Caribbean community in Orange county resides.

The cuisine of Trinidad featured at Singh’s has strong influences from Indian cuisine, with blends of native American traditions, European, African, Creole, Chinese, and Lebanese.

The woman working at the register has the look of the angry cafeteria lunch lady with a heart of gold, if only you give her a chance and a smile. The atmosphere is very relaxed, but there is a Caribbean no nonsense attitude that you get from the staff here, like you should just know what you want, order it, eat it, and enjoy.

Looking around quickly, and upon the register lady’s suggestion, we order the doubles, curry duck over rice, and a beef roti.

Their menu boasts that they have the best doublesin town, which is made of two fried flat breads and stuffed with spicy curried chick peas. You eat it with your hands like a small sandwich made of curry chickpea deliciousness. It is exquisite and hearty, served fresh and hot out of the back counters.

Rotis and curries are popular dishes here, a cuisine adopted from indentured laborers from India who came to work in Trinidad via the British in the 19th century.

Roti is a thin, unleavened bread made primarily of wheat and cooked on a tava griddle and served either stuffed or on the side. Roti dish options at Singh’s include aloo (potato), channa (chickpeas), chicken, goat, beef, shrimp, conch, duck, curry/stew snapper, and curry gilbacker fish.

Our beef roti is a huge wrapped package comprised of a mostly chewy, stewed beef over rice with chickpeas and potatoes wrapped in the roti bread. It really reminds me of a tortilla, the similarities to a Indian style burrito are striking. If you like, use a fork and knife to cut through the roti to make it a more formidable eat.

Curry duck, a brownish stewed dish, is a savory, heaping hot mess over fluffy basmati rice tasting full of spices like cumin, tumeric, and curry of course. It was my favorite item here.

If you aren’t a fan of picking through bones, I would forgo the goat roti.

Singh’s also serves cutters, which is a popular sandwich made with a bread roll that is cut in half, crossways and stuffed with a savory filling.

Curiously enough, there is also a Chinese menu at Singh’s roti shop, owing in no small part to the influence of Chinese immigrants who came to the West Indies over the past century during the time the Chinese Exclusion Act was instated in the United States.

This menu includes fried rice, lo mein, and other typical Chinese items but also lap chong, the chinese sausage, and roast duck. I’ll have to check that out next time.

Prices rose recently, I would recommend that they update their prices as soon as possible in order to avoid misunderstandings with customers who might think they are being over charged from prices advertised. Around $10 for the curry and roti dishes.

A large bar area takes up the left half of the restaurant, used primarily when Singh’s Roti Shop turns into a night club of sorts after hours.

Overall, a nice place to start your adventure into the food of the West Indies. Definitely worth a try for their curry duck and vegetable dishes.

Photos from the Visit to Singh’s Roti Shop

What is going on here?

Please do not touch the glass…with your lips. 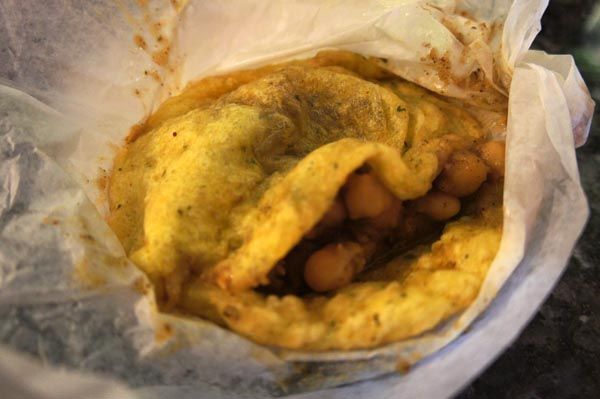 The roti package has arrived.