BurgerFi – the burger trend has arrived…. 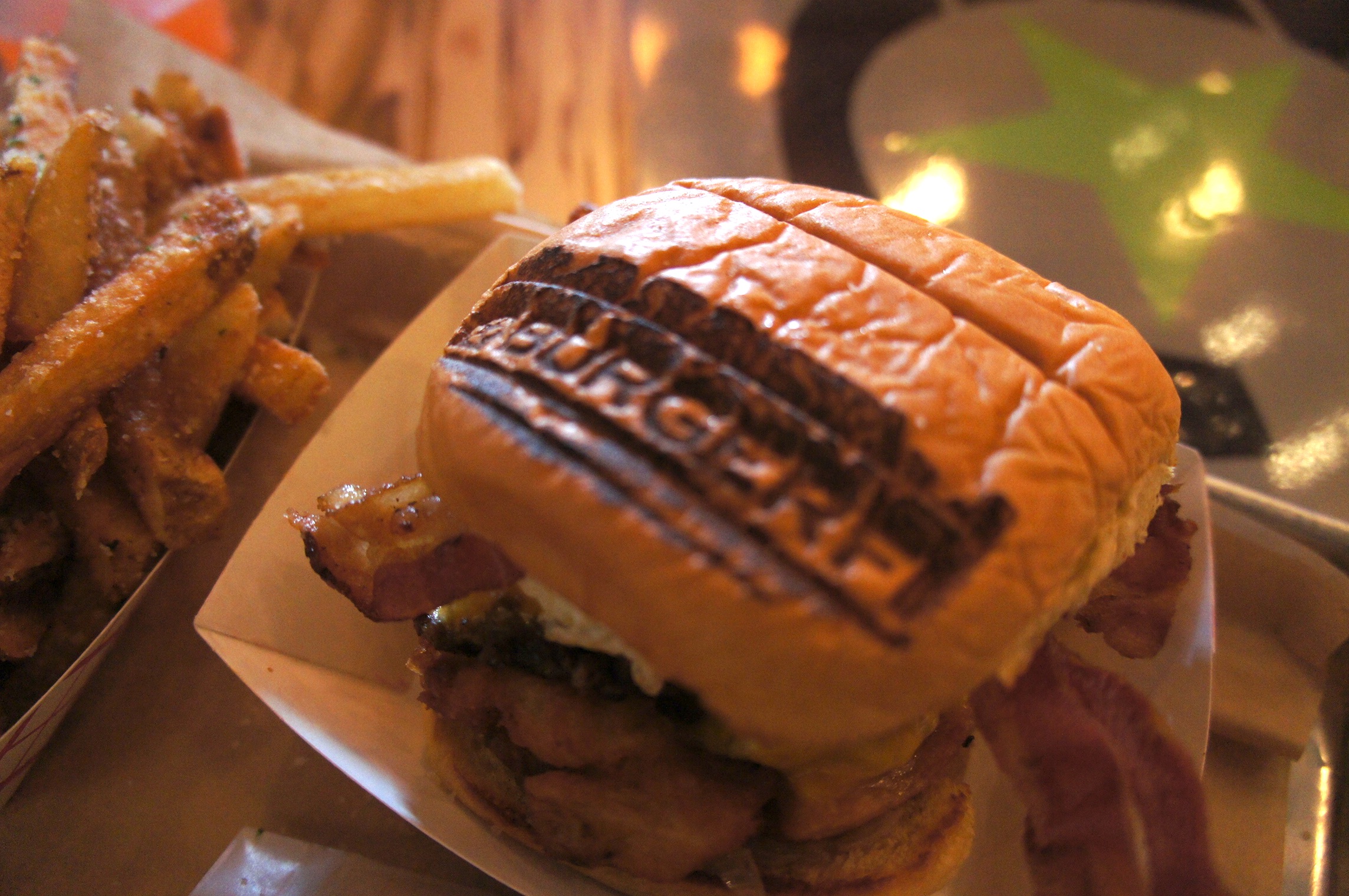 BurgerFi recently opened in Winter Park along busy Park Avenue in a rather popular corner overlooking Fairbanks Avenue and Rollins College across the street. I paid the place a visit recently to scope out the first of many burger joints to open up in Orlando as part of the national gourmet burger trend on the rise. These burgers, unlike the fast food burgers of yore, are thought of as beefier, more global citizen minded, and with higher quality ingredients. Some burger joints even go so far as to place flakes of gold, foie gras, and truffles as toppings to their beef burgers.

BurgerFi sits at the mid range level of the gourmet burger trend with prices ranging around $8-$10 per meal, and I’d put it just slightly above Five Guys burgers on the burger charts. Founded in Delray Beach, BurgerFi prides itself on its use of grassfed beef that’s never frozen, as well as being environmentally conscious in its operations.

The restaurant is beautiful inside, with a rustic feel from the wood panel walls and unique lighting, yet also a modern, sleek look from the outside panels, giving it a feeling of fitting right alongside some of the other  more posh eateries along Park Avenue. The place appears to be bustling with business, with students from nearby Rollins, parents and friends from around the neighborhood all meeting up, sitting alongside businessmen and seniors at one of their communal tables.

You walk up to the counter to order here, choosing from a list of burgers, or you can make your own burger – with premium ingredients like sunny side up egg and hickory bacon for extra – as well as adding sides that include fries, beef hot dogs, “real” Coca Cola from real sugar without the corn syrup, frozen custard desserts, and beer & wine. There is even a (rather poorly kept) “secret menu” that you can find here http://burgerfi.com/menu.php#secret that includes orders like “urban fries” and “alternative style” burgers a la In-N-Out burger on the west coast.

My dining companion chose the original BurgerFi burger, topped with lettuce, tomato and a secret sauce. I chose, upon recommendation from my friend Gabby (of Audubon Park District), the “B.A.D. – Breakfast All Day” Burger that comes with egg, hash browns, and bacon. The orders are brought to you via a remote location device that you place on the center of the mat at your table.

Each burger here is marked with the signature “BurgerFi” logo grill marks seared on top of the bun, though I did not recognize any “burnt” tastes from it, thankfully. My friend’s burger turned out, rather disappointingly simple and bland. I suppose there may have been too much hype leading up to this moment. The burger’s buns were a bit too soft and sticky to chew on and the beef patties themselves were a bit lacking in the flavor department. Also, the patties were a bit too dry, thin, and flaky for my tastes and it probably could be best compared to Five Guys, whether you like that or not. Though my BAD burger tasted a lot better, aided mostly by the addition of the bacon and hash browns – not by the well done egg – I still found the buns and the burger meat patties themselves to be lacking. The parmesan and herb fries that we ordered with the meal were also lackluster and rather limp, as though they had not been fried long enough resulting in a slightly soggy texture. Hopefully this was a fluke and an off day for them, but I do hope they figure it out soon.

The burger trend has arrived, but I hope the scene gets better. Overall, the experience just felt a little bit too much like eating at a high school cafeteria, despite the nicer digs, and with slightly better food offerings.