Hollis Wilder, the first two-time champion of Food Network’s Cupcake Wars takes the traditional sweet cupcake in a new direction, with fresh flavors and a new savory look. The trusty cupcake pan works just as well for satisfying mini meals as it does for decadent sweets. Small, uniform portions make it easier to avoid overeating, and the meals are perfect for making ahead of time and freezing for the week in single or family-size portions. Hollis provides tips for having children help with the cooking to make a more enjoyable family mealtime. With 100 exciting recipes for breakfast, lunch, and dinner, such as Apple-Sausage Breakfast Cakes, Fig and Blue Cheese Tarts, Pumpkin Risotto, and Curried Chicken with Mango, Savory Bites proves a cupcake pan isn’t just for sweets and is sure to please any palate or budget. For more info, please watch her  2 minute sizzle. 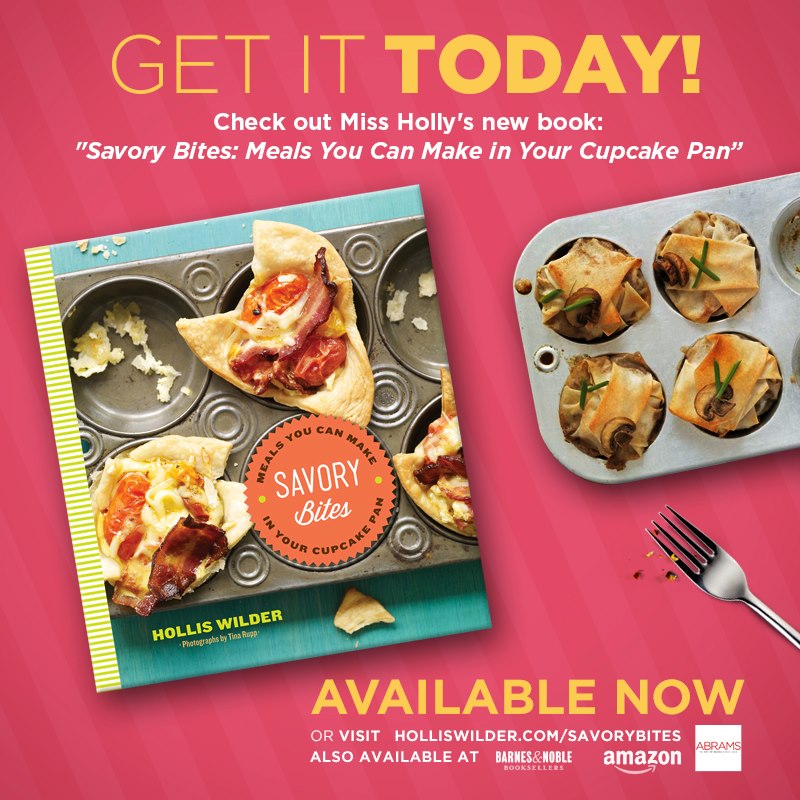 The first two time winner of  Food Network’s Cupcakes Wars , Hollis Wilder is known for her charisma, Speaking Engagements and of course, delicious treats from her SweetByHolly stores. To add to her list of accomplishments, Hollis Wilder’s very first cookbook Savory Bites: Meals You can Make in your Cupcake Pan,  hit bookshelves on April 9 from Stewart, Tabori and Chang, an imprint of ABRAMS Books.  All about “Living Life in Portions”, she is determined to use her success to help the nation fight obesity one portion at a time using the classic American cupcake pan.

To add to the excitement, the first two-time winner of Cupcake Wars returns to Food Network this Sunday, April 14, 8pm EST for her third attempt at the crown. Will she be the only three-peat winner?

Hailed as the Cupcake Queen by USA Today, she was also featured on the Cooking Channel’s pilot episode of Cupcake Confidential.  Wilder’s past client list as a Chef in LA read like an invitation to the Oscars with names such as Demi Moore, Tom Cruise, Nicole Kidman, The Osmonds, Michael Jackson, Arnold Schwarzenegger, Annette Benning, Bruce Willis, Warren Beatty, Jay  Leno, The Rolling Stones and even Mikhail Gorbachev.