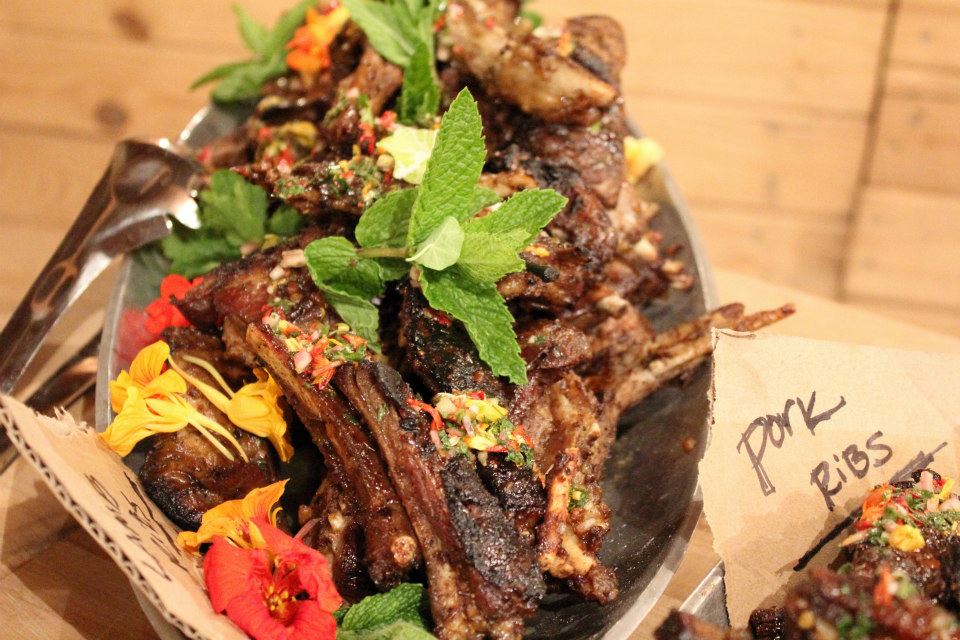 Chef Hari Pulapaka of Cress Restaurant in DeLand, FL was one of 15 chefs from around the nation for the James Beard Foundation’s first official Chefs Boot Camp for Policy & Change at the 21c Museum Hotel in Louisville, Kentucky this past May 12-14.

“Now, with the leadership of the James Beard Foundation, chefs have even more of an opportunity to become educated and empowered to help advocate for the change we have spent our careers striving for. I have yet another reason to be a chef: because I want to create a food system in which it is a right, not a privilege, for everyone on the planet to enjoy healthy, sustainable food.” – Maria Hines, James Beard Award–winning chef of Golden Beetle Restaurant and Bar and Tilth in Seattle.

The goal is to build a growing network of like-minded chefs, provide support for personal interests and passions, and give tools and guidance that will help them act as influential advocates to improve local food systems.

Activities at the boot camp included a tour of nearby Woodland Farm, known for its sustainable farming practices, heritage livestock breeds, and biofuel program; and a meeting with Louisville mayor Greg Fischer, whose policy agenda includes strengthening the role of local food in the city.

I got a chance to talk to Chef Hari Pulapaka via facebook about his experience at the boot camp and aspirations for our local food systems here in Central Florida.

Ricky Ly, TastyChomps.com
The boot camp had “hands-on activities that engage chefs with local natural resources, such as harvesting and visits to local farms, slaughterhouses, fisheries, and other producers ” can you tell us more about your experience at the boot camp with these activities? anything that stood out for you?

Chef Hari Pulapaka
Of course. We spent an entire day at Woodland Farm just outside Louisville, The day was spent learning about the Farm’s sustainable efforts in raising Livestock (Bison, Heritage Pigs, Cattle, Poultry) and also their green houses and farms. We witnessed a live slaughter of a pig, which was probably the most memorable activity. It re-enforced the great need for humane treatment of animals whether they be for consumption or as pets. We then cooked a collaborative dinner that evening with a variety of ingredients from the farm to about 80-100 guests in a barn (family style).

Ricky Ly
It’s interesting that you got to see a hog slaughtered at the farm because a lot of our food today is so processed and so prepared that we forget how food actually is made, from the farm to the butcher to the kitchen. It makes you think twice sometimes about where your food comes from and how it was raised.

Hari Pulapaka
I agree. For me, it was about the reminder that truly humane treatment of animals (and humans alike) is a very high standard and everyone should aspire to that.

Ricky Ly
What can people here locally do to make themselves more aware of where their food comes from? What kind of questions do you think people should ask when they are out and about eating?

Stetson University just announced that they have hired a new company to oversee their Dining Services and one of things this company is promising is that at least 25% of all their ingredients will be locally sourced. You know I will be all over that and will hopefully be a source of information for this company.

Ricky Ly
So the boot camp took place in Louisville, KY – was there any thing you learned from there that you could take back to our local regional cuisine?

Hari Pulapaka
Chefs Levon Wallace from Proof on Main (one of our hosts) and Kathy Cary (a pioneer of the Louisville food scene) are clearly doing many things right. I am working on many initiatives as I think about what we can do in Central Florida. I am planning lectures in the Culinary Schools, talking to supermarket managers about selling more local produce, meeting with my academic bosses at Stetson about bringing together more synergy among the various folks who are already into sustainability, and finally, last but not least planning a cohort of Central Florida Chefs who have a history and/or interest of not just talking the talk, but also walking the walk. I also want to meet with Policy makers in our region (Mayors, City Managers, Representatives, Senators, and Congressmen) to see what they can support.

Ricky Ly
In Louisville, you got a chance to meet the mayor there. What was it like meeting Louisville Mayor Greg Fischer? How can we get our local elected representatives and business communities more involved and engaged in our local food systems?

Hari Pulapaka
The meeting was brief, but Mayor Fischer seems to have embraced many of the ideals we are talking about. He thinks (and perhaps, he is right) that ultimately, a plan for change has a chance only if it is economically viable. It can’t really be embraced on the face of principle alone. I think one way we can get local leaders involved is to bring them together. We have to give them a sense of what our citizens are craving about. Again, it has to make economic sense. If the ideas can be profitable for the stakeholders, chances are they will be embraced. I think we can host “salons” at our restaurants (this is where I will be looking for support from my chef colleagues in central Florida) hosting politicians, business leaders, restaurant folk, and of course farmers.

Ricky Ly
Awesome, have you been in touch with local chefs yet about this idea and any who you want to reach out to so far?

Hari Pulapaka
Only Chef Kevin Fonzo of K Restaurant so far and of course, he is all aboard. But I have to think about who might be most interested and of course, influential. I have not had the time, but after this conversation, will start compiling a list.

Ricky Ly
Do you think our area should get a demand study for local food as Louisville has had done?

Hari Pulapaka
A study that is privately funded would help make the case and I would want to be part of it. In a nutshell, the study found that demand outstripped supply. Which made the case for the city to promote the ideas in interest of boosting the local economy and “creating jobs”

Ricky Ly
What type of advocacy and policy change skills did you learn at the boot camp?

Hari Pulapaka
We were presented 3 case studies by Karen Karp (whose company led the Louisville Study), Eric Kessler (Arabella Advisors), and Katherine Miller (Chef Action Network). What I got from the training is that since there are so many issues on the table, we as chefs who lead already very busy lives whould focus on one that we are most passionate about and use them as resources to help us achieve our goal. We were split into 3 teams of five with of the three above as our mentor. The exercise was to identify our broad goal for change, then a specific actionable goal, the individuals who would help us, the reason why they would help us, the specific actions that would help us reach our specific goal and then making full circle to the beginning in assessment and future work. Our goal was to increase the nutritional values in the School Lunch Program. The specific goal was a minimum of 25% of the ingredients should be sourced locally and be fresh. You can imagine my excitement when Stetson made its announcement yesterday.

Ricky Ly
I heard that studies showed that school food was worse than food prisoners receive with such high levels of fat and sugars and preservatives and such low quality of meat. No wonder there is an obesity epidemic when we feed our children this stuff every day at school.

Hari Pulapaka
One of my staff members at Cress is Sean Henderson. Sean also has a day job. He is the Cafe Manager at Lawton Chiles Middle School in Daytona Beach. Sean has been trying to cook more fresh food with local ingredients after knowing me. His work was recently featured in the Daytona Beach News Journal.

Ricky Ly
At the colloborative dinner at the James Beard Chef’s Boot Camp, what did you prepare for the meal?

Hari Pulapaka
I let all the other chefs pick their proteins. Left with chicken, I marinated the dark meat in bourbon (of course) and spices, grilled it and made a sauce with a la minute chicken stock using onions, fennel, corainder, cumin, mint, cilantro, garlic, and chilies. I pulled the meat off the bone and tossed it in the sauce. It was on a bed of Farms greens tossed in a honey balsamic vinaigrette. The sauce was also a dipping sauce for some torn grilled baguette.

Hari Pulapaka
I don’t think it sucked. One of the chefs told me many times … It was the best thing she tasted that night. I was pleased with the depth of flavour I was able to generate in the sauce.

Ricky Ly
Finally, what are the biggest obstacles that you foresee in achieving a better local food system?

Hari Pulapaka
The best part was being able to meet so many cool and talented chefs, some of who might become good friends in the future. One of the biggest obstacles I think will be providing better access to fresh local food in terms of geography as well as making it affordable. Another will be to wean people from their fast food and convenience diets. You cannot force people to eat better. You have to show them that it tastes better and is better for them.

Participating chefs at the May 2013 Boot Camp in Louisville included: