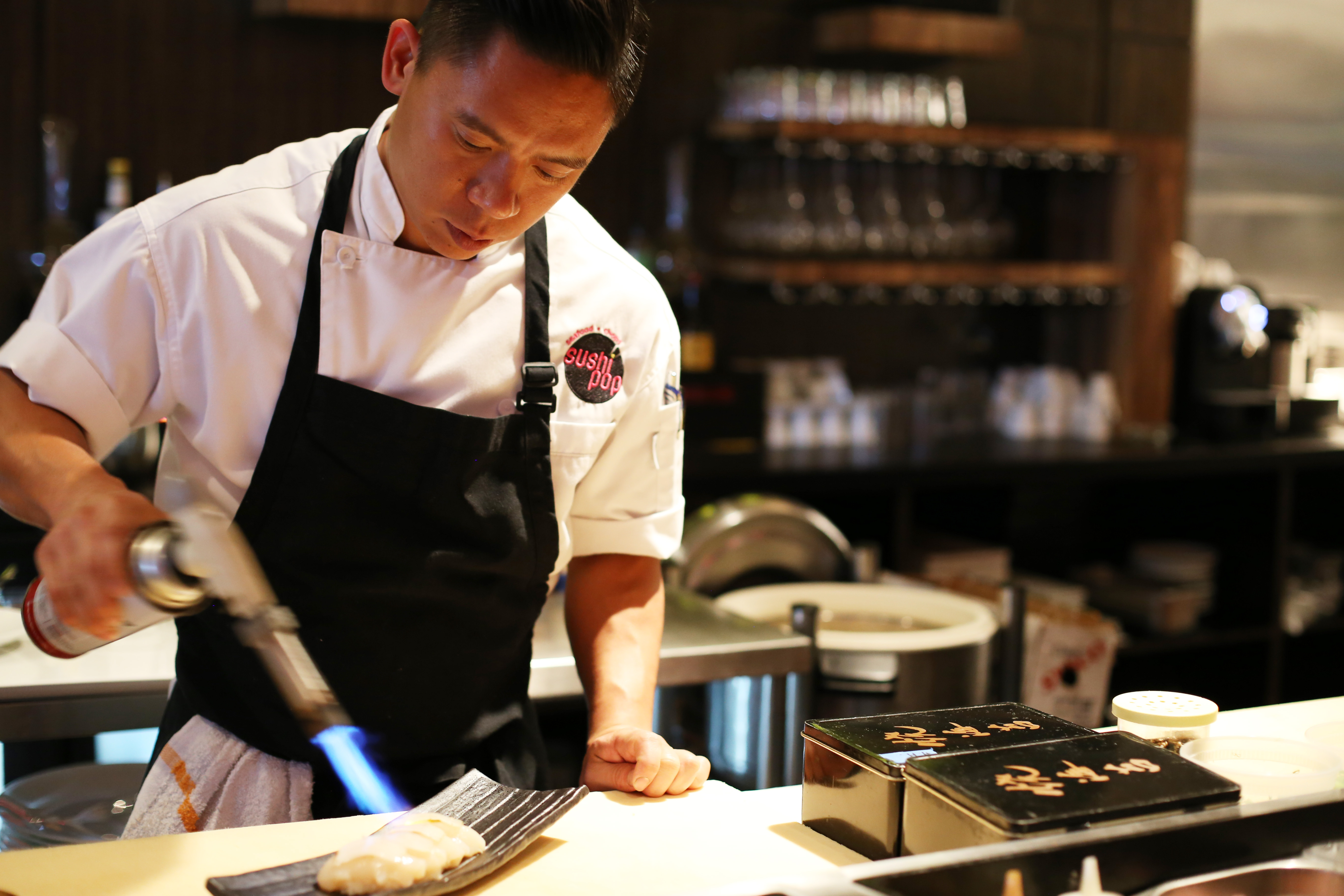 If you haven’t been to Oviedo in a while, particularly to visit Sushi Pop, I suggest to you – Don’t mind the Oviedo chickens, just hurry on over and make some dinner plans as soon as possible.

A few new items recently debuted on the dinner menu at Sushi Pop, many of which will probably leave you utterly stunned and inspired, like I recently did during a visit, with the truly creative and delightful tastings that Chef Chau and his team has conducted.

Chef Chau explained, “We try to stay true to the season. But most the time we are inspired by the things we’ve eaten, experienced or are experimenting on. It comes in all forms, sometimes it starts with an idea and then we just keep going down that rabbit hole.”

“Chefs really don’t have a continuing education program. What we have to supplement this is called a “stage” or an externship. And that’s what I did at Le Bernardin. For a few days I got to hang out with some really talented chefs and do something completely out of my comfort level, it was very exciting! I try to do a stage once a year to get inspired. Next one will be at Benu, Corey Lee’s 2 Michelin star restaurant in San Francisco.”

“I had lunch at Le Bernardin one time and I got the chef’s tasting which was $150. The entire time they kept pushing a wine tasting on me but I told them I was working the dinner shift so I couldn’t. Finally they convinced me to have some champagne. At the end of the meal the check came out and there was no bill. I called the captain over and asked what happened. He said everything was taken care. I said “wow I really should pay”. He said no, you are now part of the Le Bernardin family…so classy.”

One thing that Chef Chau brought back to Sushi Pop was a newfound appreciation and love for using the confit method to cooking, as evidenced by the new khao soi noodle dish, featuring a whole leg of duck confit.

Savory and sweet with textures of crunchy and soft – with a deft and masterful touch from Chef Chau at Sushi Pop, it’s transformed from Rangon street food to a blissful art. The noodles are made in house, infused with black squid ink and Korean gochujaru peppers, so there is a slight touch of spice to the thick noodles. The base of the dish is the curry, a combination of Thai curry, galangal, lemongrass, and chicken stock.

The star is the leg of duck confit – perfectly executed with delicately crispy skin and meat that has fall-off-the-bone tenderness, the duck combined with the black noodles and the curry sauce together is pure nirvana. 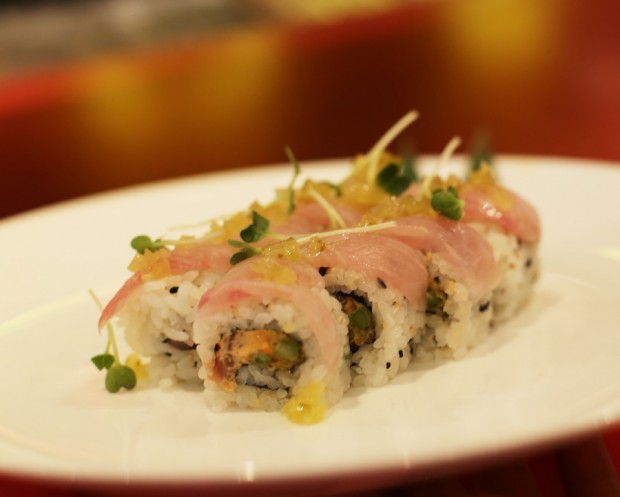 The chef sent out a lovely tasting, not currently available on the menu – a seared tuna nigiri, marinated in ponzu with panko, shiso on black garlic sushi rice, made by mashing black garlic and a little squid ink with the sushi rice. The black garlic, a well guarded secret in the industry, is made by here by cooking and drying for months so that it is sweet and has a slightly less garlicky finish, and of course the black color.

Spanish boquerones, the “Mercedes Benz” of anchovies, is served nigiri style with rice in a way that mimics the flavors of a caeser salad in sushi form. Fried capers in olive oil, panko, vinegar, marinated anchovies, and a touch of caeser dressing style aioli.

Octopus a la Plancha is a product of one of Chef Chau’s forays into modernist cuisine or molecular gastronomy. The octopus is cooked sous vide for hours to get its soft, almost gelatinous-like texture and then pan seared with roasted shishito peppers, white scallions, relish chimichurri sauce, and light puffs of sweet potato espuma. 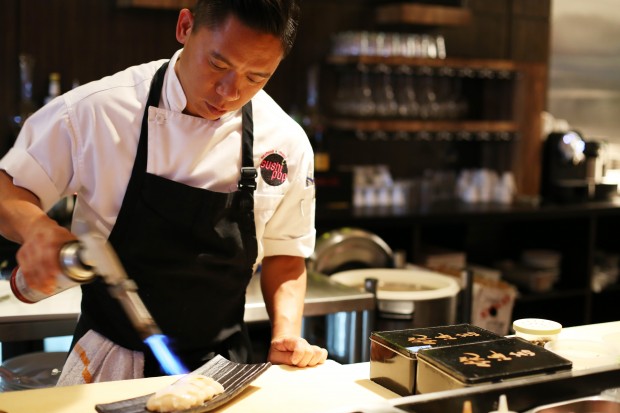 TastyChomps: Where did you grow up and how did you gain your experiences as a chef?

I immigrated over to the US from Vietnam when I was 18 months old. We eventually made our way to Ft Myers, Florida and that’s where I grew up. My aunt opened the first Chinese restaurant in which all our family worked at. That was my first taste of the restaurant industry. Eventually I started working for my parents’ restaurants. I learned a lot through the chefs they had.

Eventually in high school I started making sushi to make some extra money, and it has stuck ever since. I have no formal training.

My first “a ha” moment was eating at Nobu around early 2000 in NYC. Chef Nobu Matsuhisa is the pioneer of modern sushi – well, him and my favorite Chef Morimoto.

I got to see sushi in a whole new light. I would say that was the first time my food really started changing.

In 2002, I opened up Shari Sushi Lounge – And I got an opportunity to visit Tokyo where I got to see where the cuisine I do was born.

It was life changing, from seeing the Masamoto knife shop (where I get my favorite knives), to hanging out with an eccentric chef Suzuki San at Maguro Ya and of course touring and seeing a tuna auction in Tsukiji market.

And of course, experiences through staging and working with talented people only makes you better.

I try to stay active whether that comes in the form of biking or running. I love the water, so come summer I’ll be 3 shades darker from surfing and fishing.

In the kitchen, we are always playing practical jokes with each other. One time, my sous chef cryo-vac’d my running shoes, froze them in a cambro with water. He brought it out to me one day and said we were “running” a special with this, lol I had no idea what meat or animal it was until I started de thawing it.

It was great, I won’t tell you what I did but I got him back pretty good.