Bizarre Foods is heading to Portugal’s Lisbon, dines at a snail’s pace – Nov 3 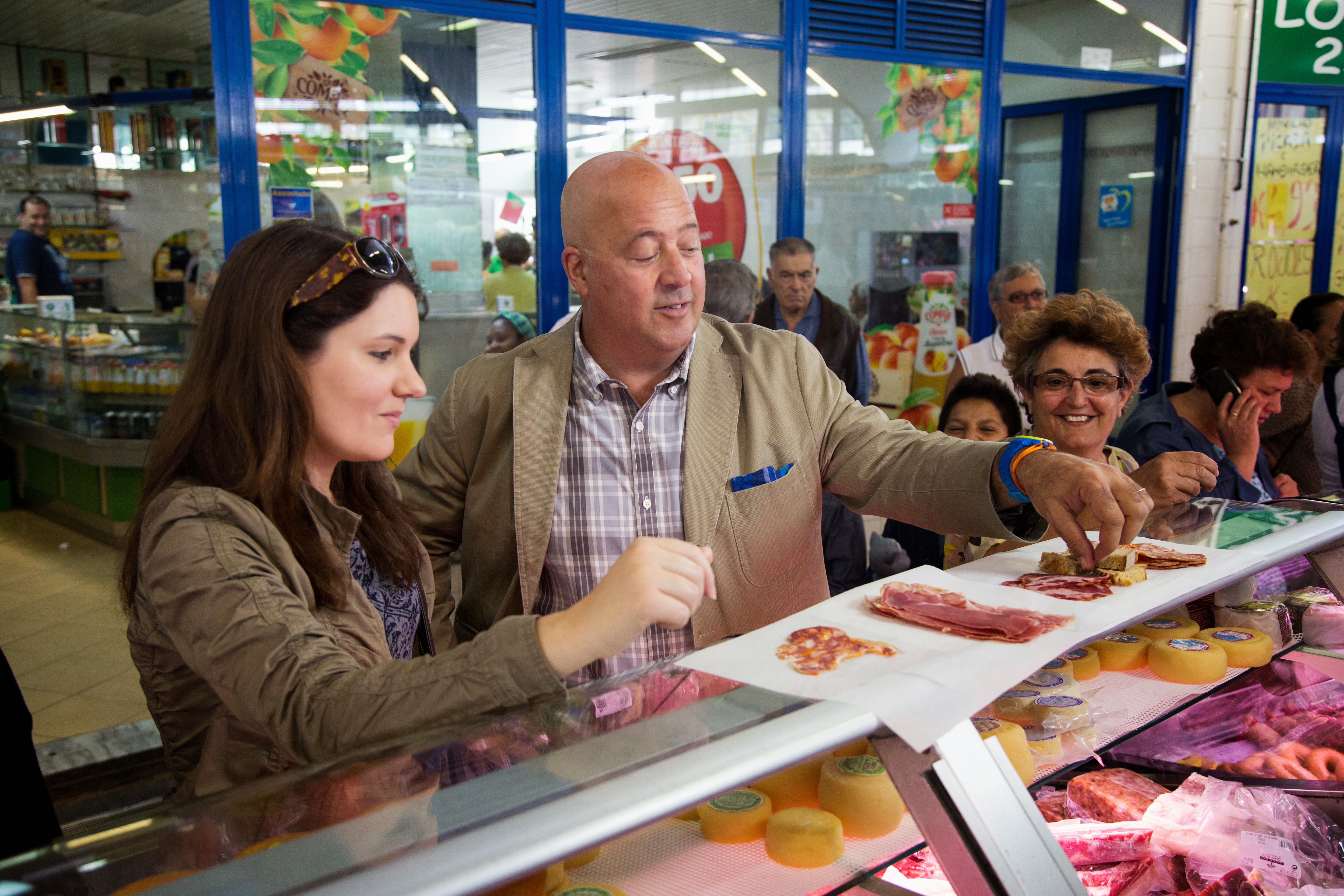 Lisbon, Portugal — Andrew Zimmern is off to Lisbon to discover a diverse and unexplored European cuisine. The episode will air November 3, 2014 at 9 p.m. next week on the Travel Channel,

While Andrew will dine on lots for fresh fish from Portugal’s hundreds of miles of Atlantic Coast, he will also try a few recipes involving snails.

Andrew Zimmern finds that “caracois” is a fresh seasonal cheap eat in Lisbon from June to September. It is not unusual to see signs go up outside of restaurants declaring “Há Caracóis” – or “we have snails.” The dish is originally from the Alentejo and Algarve Regions, south of Lisbon. Snails are often flavored with laurel, thyme, garlic, onion, olive oil, salt and oregano.

With miles of Atlantic coast, Portugal has lots of fresh fish and seafood that is often grilled or served in a simple sauce of olive oil and butter. One of the staple Portuguese meals is “bacalhau”–a dried, salted cod. There are so many ways to serve what is commonly called “the faithful friend” that it is said there is a cod dish for each day of the year. Another countrywide favorite is grilled sardines.

While fresh fish and seafood defines a great deal of the nation’s cuisine, the taste of each region holds its own specialties.

The North is known for its staple “broa,” a rich, dark cornbread. “Broa” is served along with the simplest meals. Also common in the north are Presuntos, or smoked ham, and handmade sausages. Roasted tripe is another staple, often served with beans.

The Centro de Portugal Region, between Porto and Lisbon, is home to platters of octopus rice and “chanfana” goat meat stewed with wine.

All of Portugal produces outstanding artisan cheeses, but the country’s crowning jewel is the rich sheep’s cheese known as “Queijo da Serra,” from this region’s Estrela Mountains. Other great cheeses are from Sabugal and Rabaçal.

The wide-open Alentejo region and the coastal Algarve region each have distinct dishes. “Migas” or breadcrumbs, rich sausages and dark hams are popular in the Alentejo. The Algarve specializes in spicy, grilled seafood, and marinated carrots are another popular dish.

On Portugal’s Madeira Island, a favorite dish is “Milho Frito,” which is fried cubes of polenta. In the Azores, limpets (a shellfish) and croques (a small mollusk unique to the Azores) are local specialties.

Bizarre Foods focuses on regional cuisine from around the world that is typically perceived as being exotic, or bizarre. In each episode, Zimmern focuses on the cuisine of a particular country or region. He typically shows how the food is procured, where it is served, and, without hesitation, eats it.

Portugal is a country of contrasts that boasts some of the most unspoiled natural vistas, the richest traditions, the most intoxicating culture, the most adrenaline-pumping adventures, and the most serene retreats in all of Europe.

Inside Look: Bem Bom On Corrine with Chef Chico Mendonca