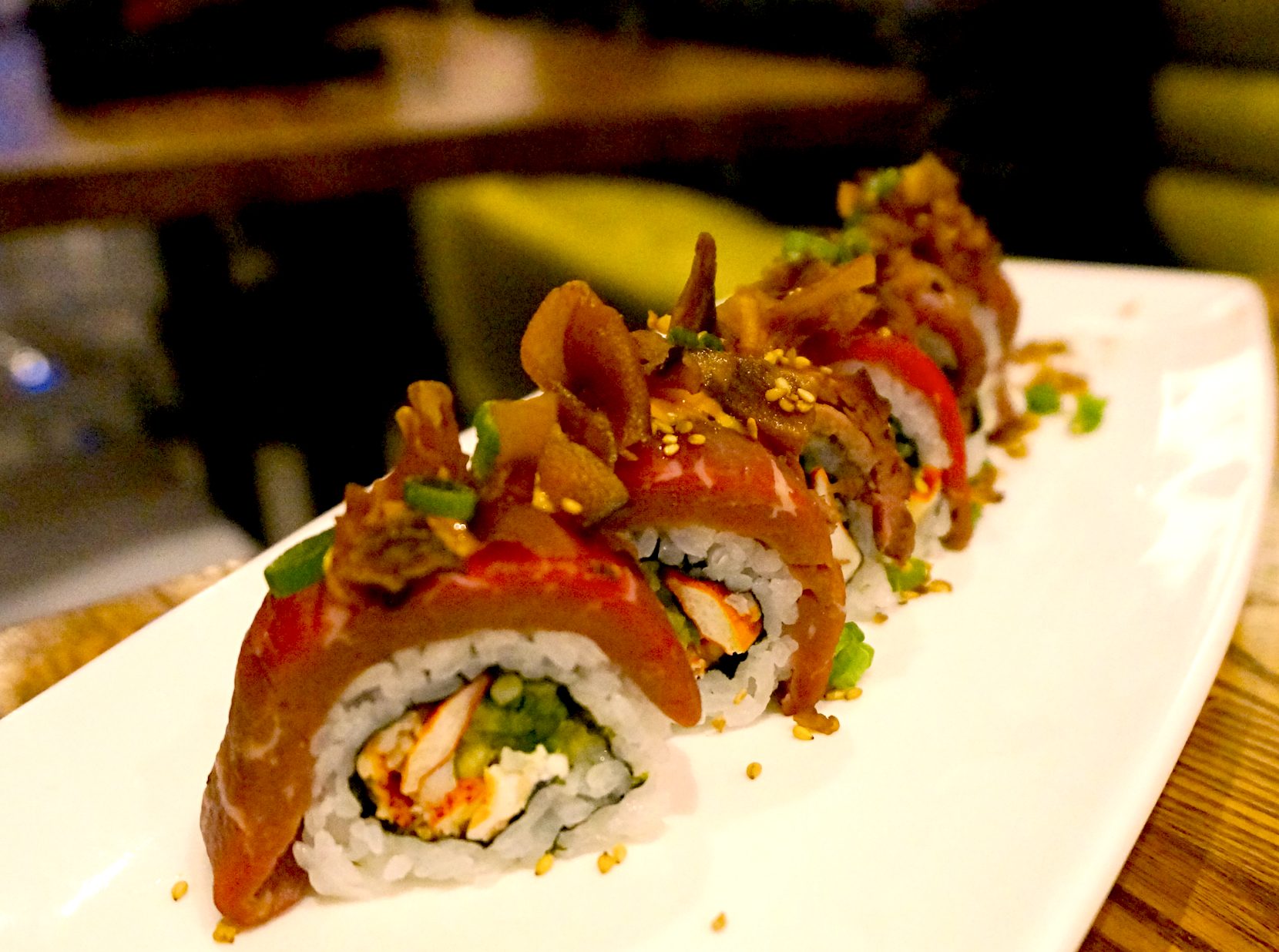 I had the honor of attending the opening of one of the newest and most innovative restaurants here in Central Florida, Cowfish at Universal City Walk. Cowfish offers both burgers AND sushi, two very different ends of the food spectrum. However, they managed to harmoniously fuse these two foods together and form a very inventive food concept- Burgushi. 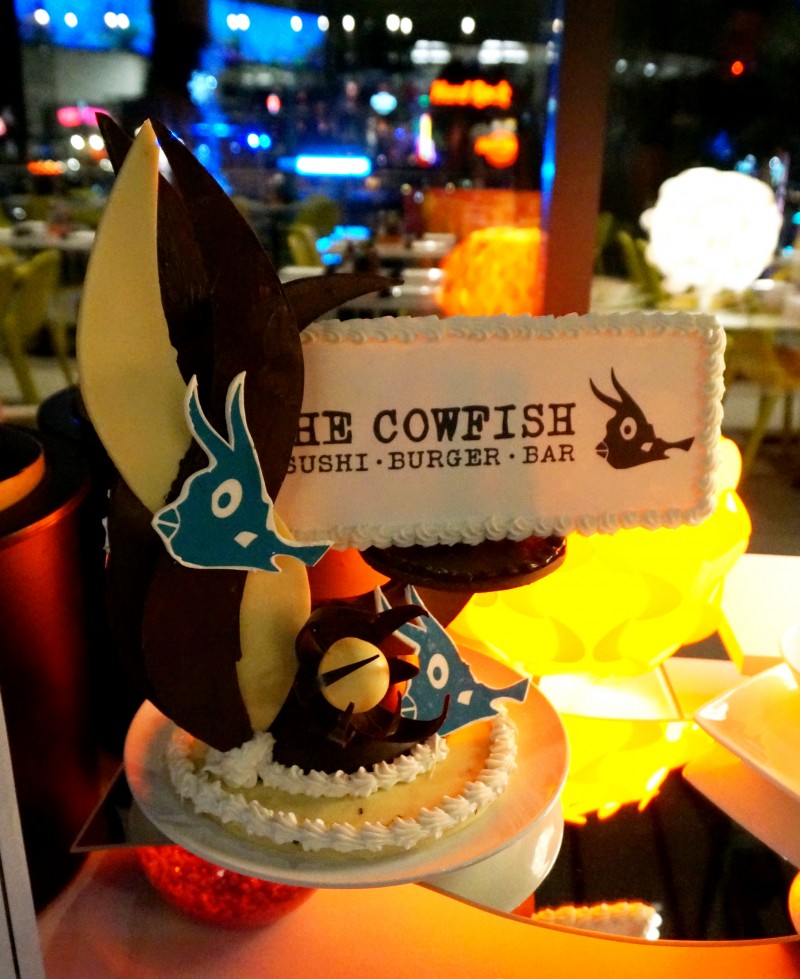 The night began when the elevator doors opened and we were immediately greeted with friendly faces and even friendlier cocktails. I made my first choice with the Ruby Panther (9.5): it is as dangerous as it sounds. It did not possess any hints of alcohol, only the sweetness and slight tang of raspberries and lemonade. Another drink that stood out to me was the Bees Knees (9.5), the gin was mellow and citrusy but then you get a sweet note from the honey sitting at the bottom. It was also topped with a charming honeycomb stick. 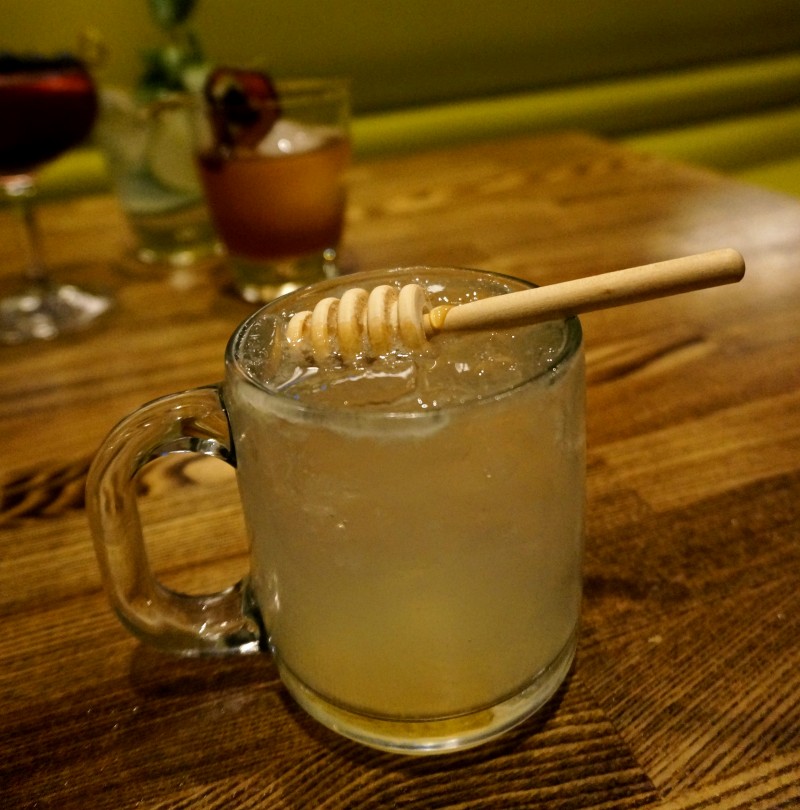 Although, I believe the crowd favorite would be Buffalos and Bacon (11). The bourbon drink featured a specialty ice that melts slower than regular ice cubes due to its design and composition, allowing you time to savor the drink while snacking on the candied bacon that comes with it. Soon after, I was introduced to the Thundering Herd Bison Burger (15), which had sharp cheddar and a light kick from the chipotle aioli but calmed with a fresh avocado salsa. The burger was not over seasoned which let the true flavors of the beef come through. In a brief moment, I was caught in a whirlwind of flavors from all the dishes that were offered on the table. 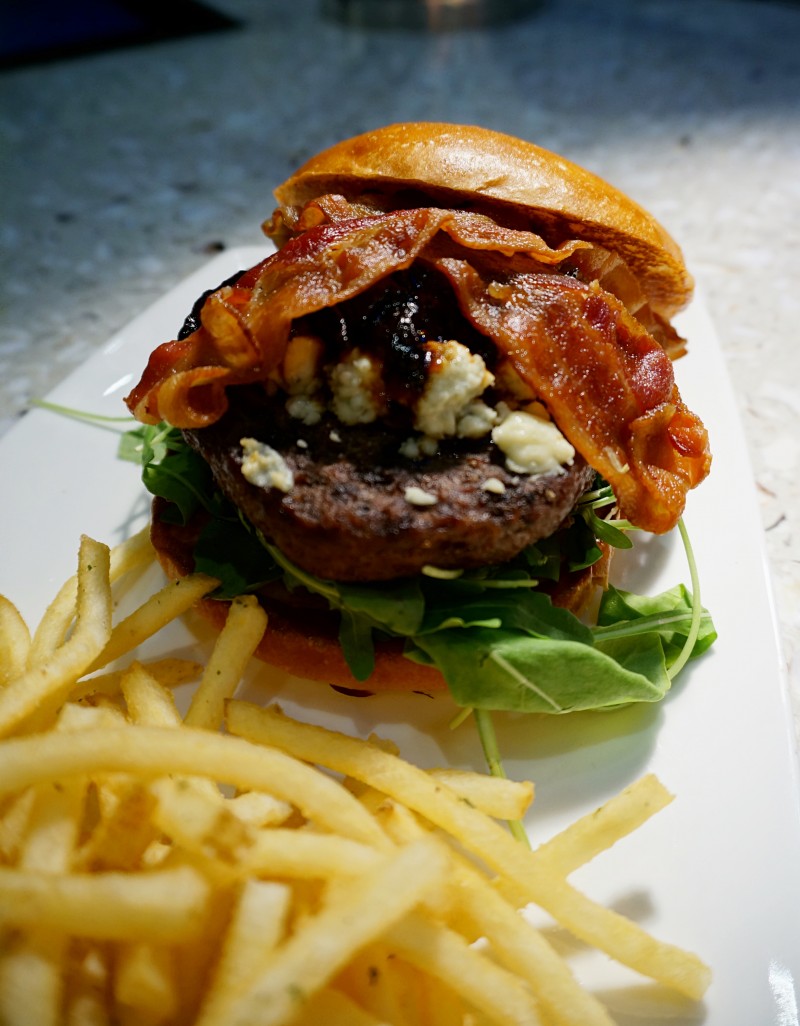 The Blackened Tuna Nachos (13) appetizer was probably my favorite. A rare seared blackened yellow fin tuna sat on top of a smooth avocado salsa and held together on a crispy wonton chip, garnished with microgreens. The “Prime Time” Filet & Lobster Roll (23) had fresh lobster, crisp cucumbers, pan-fried mushrooms that was accompanied by an incredibly tender rare seared filet mignon.

I also had samples of the salmon nigiri; the taste was clean and refreshing and not at all gritty like how some sushi would get from being kept in the freezer. The Taste Explosion roll (15) had juicy Angus beef topped with Roma tomato and pepper jack cheese and baked to a creamy sensation.

Aside from the scrumptious foods, the staffs at Cowfish were exceptionally helpful and welcoming. I’ve been a server at multiple restaurants for a couple of years now and it had opened me up to appreciate great service. Everyone was available to answer questions, take requests, and check up on you, which made the night all very comfortable for my friend and I.

I also had the opportunity to converse with the founders of Cowfish, Marcus Hall and Alan Springate. I saw how passionate and caring they are towards the guests who visit their restaurants. Not only were they open to discuss their creations, they were super fun and engaging- much like Cowfish. On a side note, be on the lookout for a new roll! Thanksgiving dinner will have a new whole meaning. 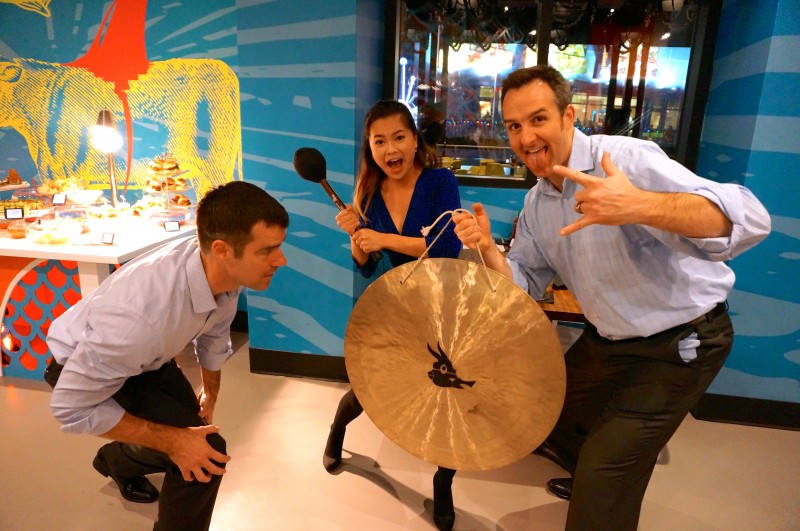 Before I had a chance to taste any of this, I have to admit I was skeptical of the whole “Burgushi” idea, but after eating and enjoying every bite, I’ve come to understand that it is its own thing.

Overall, my night at Cowfish was unbelievable! The entire ambience of the opening was lively and well fitted into the theatrics of Universal City Walk. You can definitely enjoy a night of casual dinning while being offered exceptional quality and service.