The Trump administration recently issued an immigration ban from seven Muslim majority countries (Iraq, Iran, Libya, Somalia, Sudan, Syria, and Yemen). This ban – the way it currently exists – was overturned by the federal judicial courts as unconstitutional. It not only banned refugees, but there were also cases of authorities detaining and deporting legal VISA holders and others, including here at the Orlando International Airport.

This story is personal to me as I am the child of refugees, my parents having escaped by fishing boat from Vietnam before finally being sponsored into the United States. The America I know and love has always been a welcoming and gracious nation, one full of opportunity and a place of safe harbor for those most persecuted and oppressed. If not for America’s open hearts, who knows if my parents would not have been one of the many thousands who died at sea or captured by pirates.

Chef Hari Pulapaka, a native of Mumbai, India, came to the U.S. for graduate studies in 1987. An Associate Professor of Mathematics, he has been at Stetson University since the fall of 2000. When not teaching or working on mathematics and related areas, he is at Cress, a restaurant in downtown DeLand that he owns with his wife, working as an active professional chef. He is also a four-time semi-finalist for the prestigious James Beard Award-Best Chef South and has been invited to cook on multiple occasions at the prestigious James Beard House in New York City.

Chef Hari Pulapaka is soon hosting a family style meal at Cress featuring the cuisines of the 7 countries who are part of the administration’s immigration ban – the 300 tickets are practically sold out at publication time of this article.

I was honored to speak to him briefly about the upcoming project. 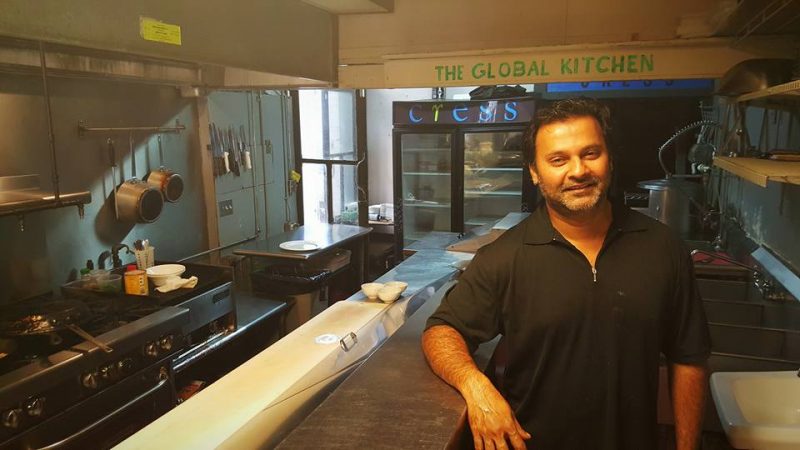 Tell us about how this dinner came about, what inspired you to create “7 Courses, 7 Countries”?
I was sitting in a plane on the tarmac in Atlanta, GA having just landed, coming off a Taste of Mathematics event hosted by the Mind Research Institute, when we heard that Delta Airlines was experiencing computer glitches nationwide and that it would be several hours before we could deplane.

At least I had a dedicated Wi-Fi connection. I logged into Facebook to find a number of posts related to the chaos and stress emanating from the Executive Order essentially banning US entry by citizens of the 7 countries. As a first generation immigrant, for some reason, I was struck by the callous and inhumane manner in which the Executive Order was enacted and impulsively felt the urge to resist with a message. So I posted that I was inspired to create such a dinner.

The reaction that ensued was mostly positive and encouraging. I usually do what I say, so, here we are.

What are your responses to criticisms about mixing politics and food?
That is a bunch of crap. First of all, business owners are human beings first. To expect them to not be vocal about political issues when they feel the natural urge to do so is almost an expectation of servitude.

Secondly, the reality of the matter is that the United States Food System is as tightly woven with the political system as one can possibly imagine. Every decision made by consumers and producers have political implications and are influenced by politics.

The food industry lobby in Washington DC is quite impressive and I don’t necessarily mean that as a compliment. For example, they managed to make the health of future generations a political issue. I understand that the devil is often in the details, but the political will is both lacking and powerful, often to the detriment of progress.

So, if I’m guilty of mixing politics and food it is because I care about improving the state of food in this country and beyond. I’m ready to live with the consequences. I’ve done it my way since the inception and I can’t imagine doing it any other way.

Tell me about the ingredients and dishes that are going to be served, what kind of research or assistance will you be getting in crafting these dishes? What prior experiences have you had with these 7 cuisines?
It is still premature for me to give anyone a full menu, but I’ve always prided myself on supporting American farmers and farms. On some occasions, I’ve gotten ingredients produced in another country, but by and large, our ingredients are produced in the United States. So, the menu will be a series of dishes representing culinary influences from Syria, Iraq, Somalia, Sudan, Iran, Libya, and Yemen (SISSILY).

Guests can expect deeply flavoured stews, herbaceous sauces, rustic breads, aromatic rice dishes, and complementing side dishes. My goal is to present the meal with dishes from many countries during the same course to illustrate that there are few rules and most dishes complement each other and that the power of food as a great equalizer, at a communal table, is a lesson for the ages. Many of the cuisines have significant intersection with flavours I am used to creating whether they are from the Indian subcontinent or the Middle-East. So, I would like to think that I am not out of my proverbial league.

But, I guess time will tell and our guests will ultimately decide. It’s $40 a person for a lot of food with all the proceeds going towards charity. Need I say more? My research has and will include a lot of reading and imagining. But in the end, my own (global) sensibility will have to lead the way.

As an immigrant, what are your thoughts about what is going on right now, what can we hope for?
On the one hand, I am hopeful that the growing resistance by both immigrants and multi-generational citizens against this climate of hate and prejudice is a sign that the America we love (as immigrants) is alive and well. On the other hand, it is disheartening to have to justify our presence to natives after having already sacrificed so much and more importantly having given so much towards the growth and betterment of this place we now call home. My hope is that ultimately, decency will prevail. But my greater hope is that bigotry and discrimination will end once and for all in my lifetime (I’m not holding my breath).

What do you hope that people will come away with from this dinner?
First and foremost, I hope people will come away with believing (even more) in the healing power of food amidst differences of opinion and ideology. Secondly, I am hopeful that guests will feel empowered to be messengers in favour of inclusivity across the spectrum. I hope that our generation, the next one, and beyond will forge ahead with demanding and finding better solutions to the complex problems of the world. And lastly, I hope that people begin experiencing before judging.

“7 Courses – 7 Countries” is a family-style meal presented by Cress Restaurant with guest collaborators featuring the amazing cuisines of IRAQ, IRAN, LIBYA, SOMALIA, SUDAN, SYRIA, and YEMEN. 100% of the proceeds will be donated to a soon to be determined non-profit organization dealing with immigrant and refugee issues. The cost to attend is $40, all-inclusive. BYOB. Sunday, February 26, 2017, 4-6 pm. For Tickets, Visit Here. 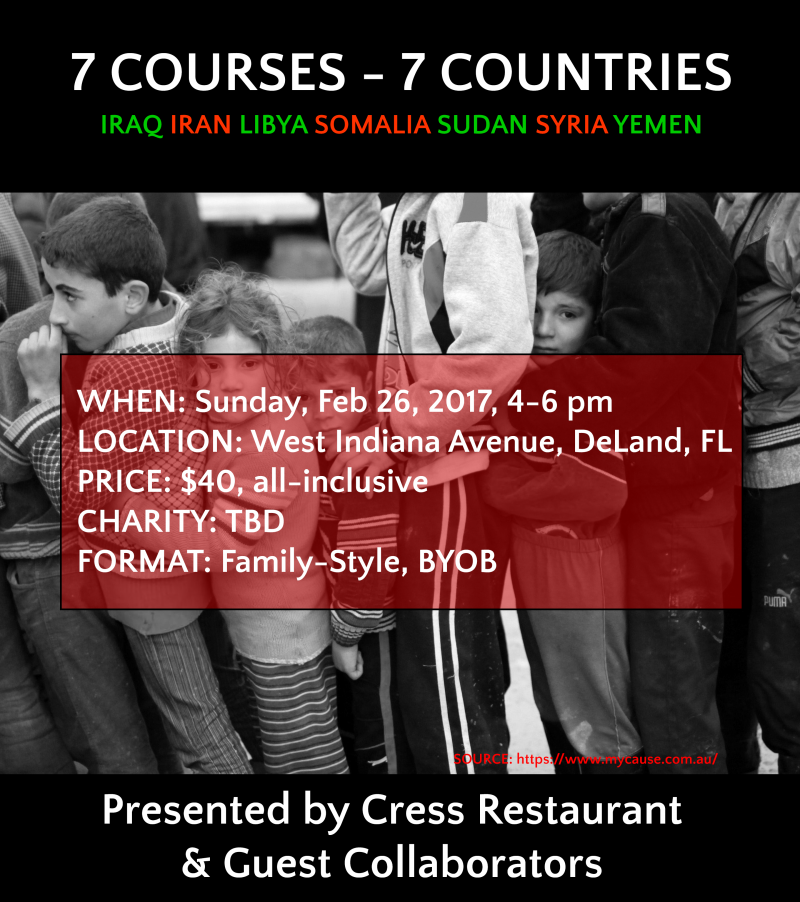