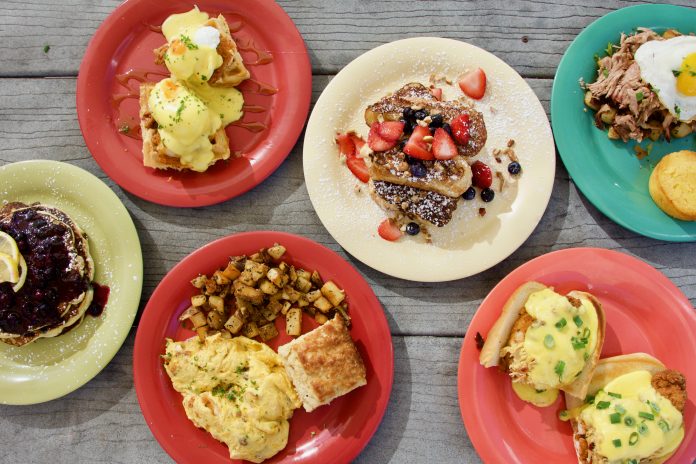 A home-style fare of the South is now hosting every day at The Coop once they added Sunday’s brunch and we were able to try a few of these items this weekend. 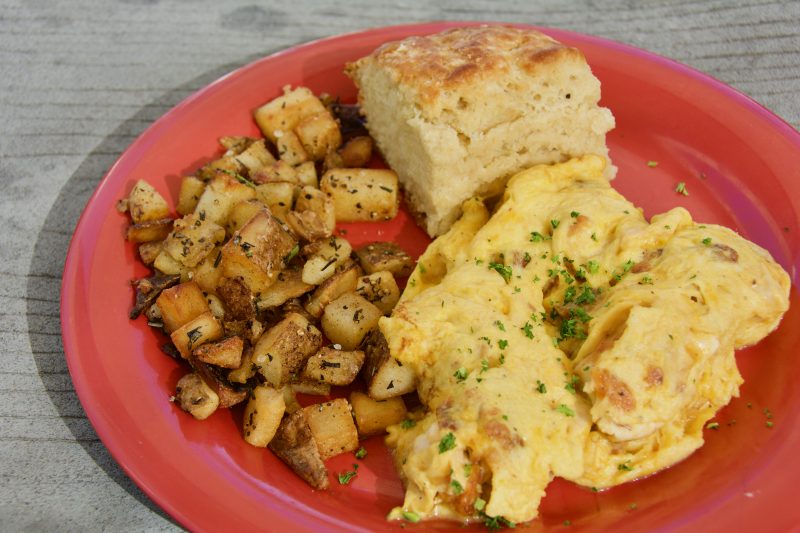 The COOP Scramble – Diced fried chicken tender with scrambled eggs and sharp cheddar cheese, with skillet potatoes or Anson Mills creamy grits. We tried the skillet potatoes, which were diced small to allow each bite to have the crunch that I love so much. The scramble was made well with the right amount of seasoning. 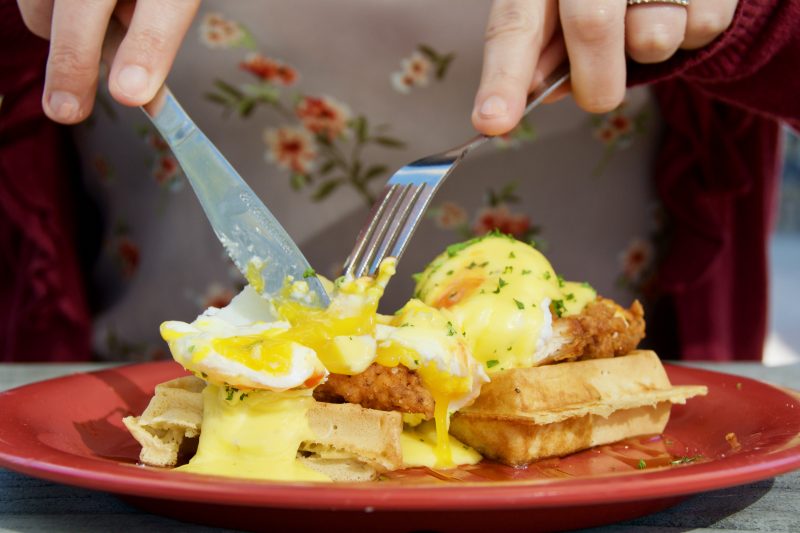 Chicken & Waffle Benedict – Giant chicken tender atop Belgian waffle with a warm Maple Bourbon syrup and two poached eggs with hollandaise sauce. This has to be my favorite dish for brunch – from the savory egg yolk, salt and herb chicken to the sweet Belgian waffle with maple bourbon. It is such a wonderful mix of flavors and I’d order this every day if possible. 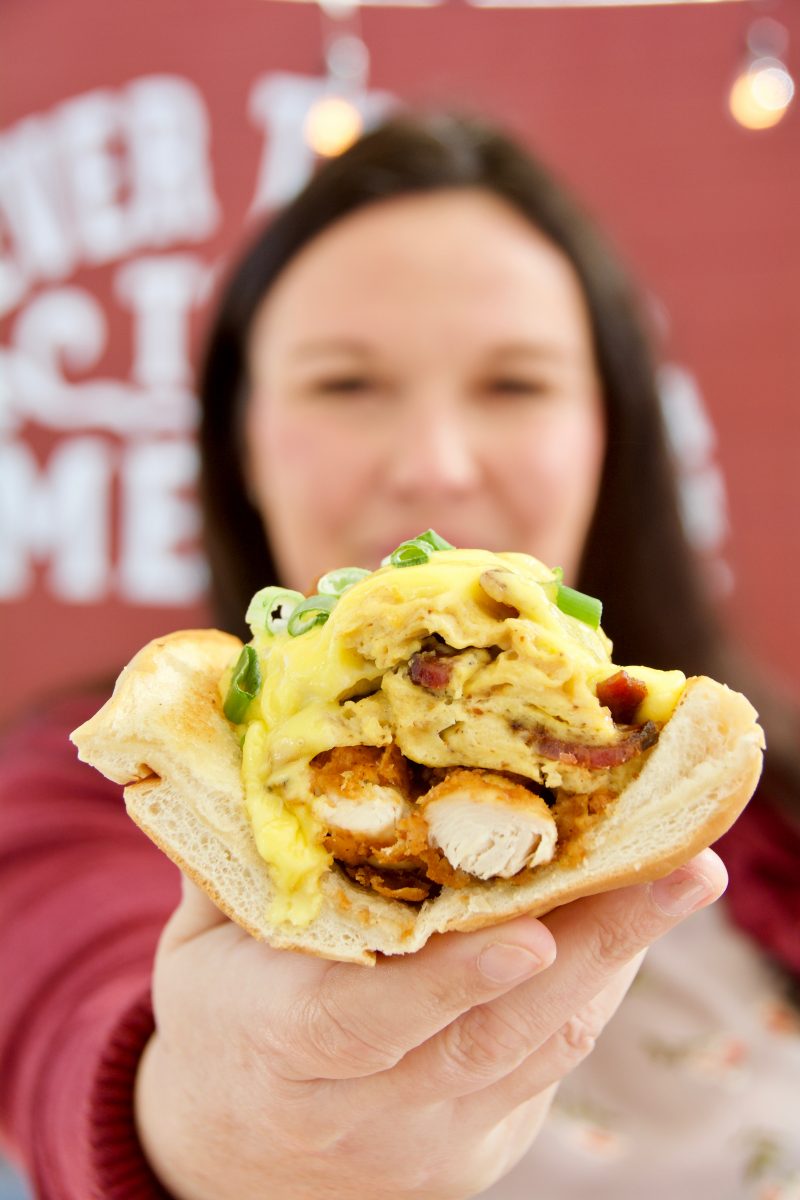 The Early Bird – Chicken tenders, scrambled eggs, shredded cheddar, and chopped bacon topped with scallions and creamy hollandaise. This is the result if the COOP scramble and Chicken & Waffle Benedict had a baby. 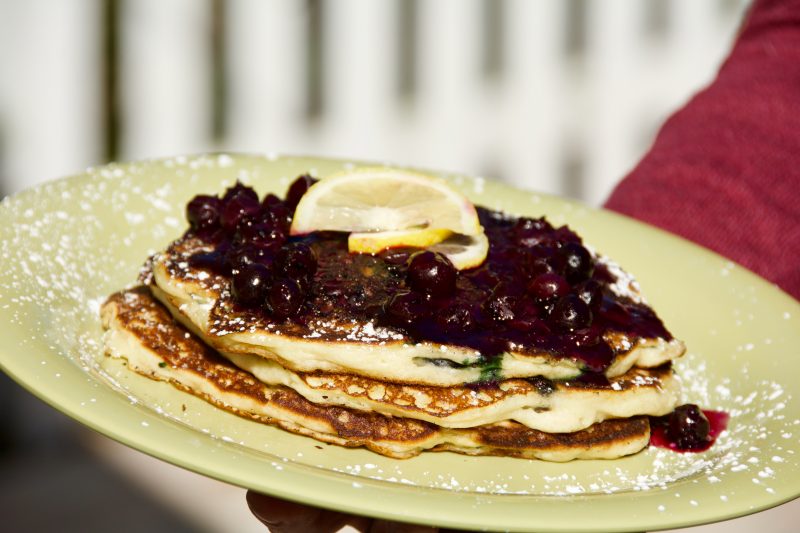 3 Blueberry Lemon Buttermilk Pancakes are popular these days. The pancakes give you a fresh note every bite you take and resembles eating dessert to me, which isn’t a bad thing because I think this would be a healthy alternative for a dessert…even though they’re pancakes. 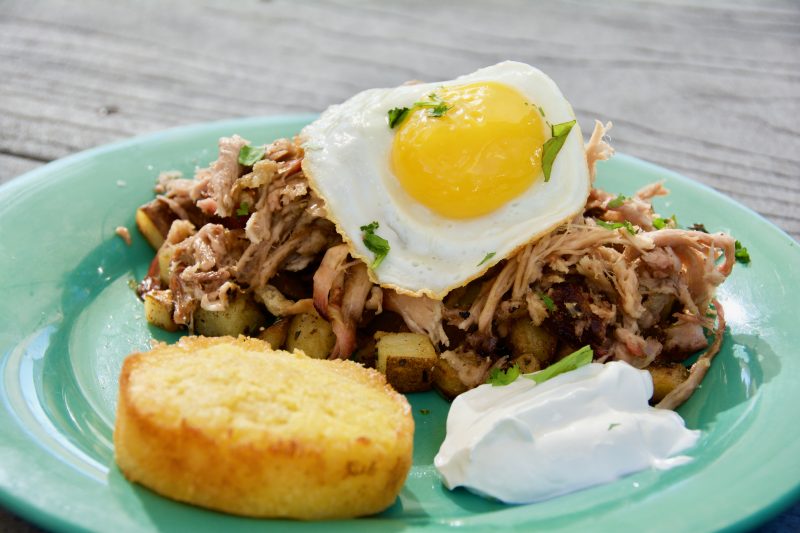 Pulled Pork Skillet – 4R Smoked Pulled Pork layered over skillet potatoes and topped with a fried egg and Maple Bourbon BBQ Drizzle. The pulled pork is delicious as always, but I believe I didn’t have as much maple bourbon BBQ drizzle as I’d like for the sweet and smokey flavors to pop even more. 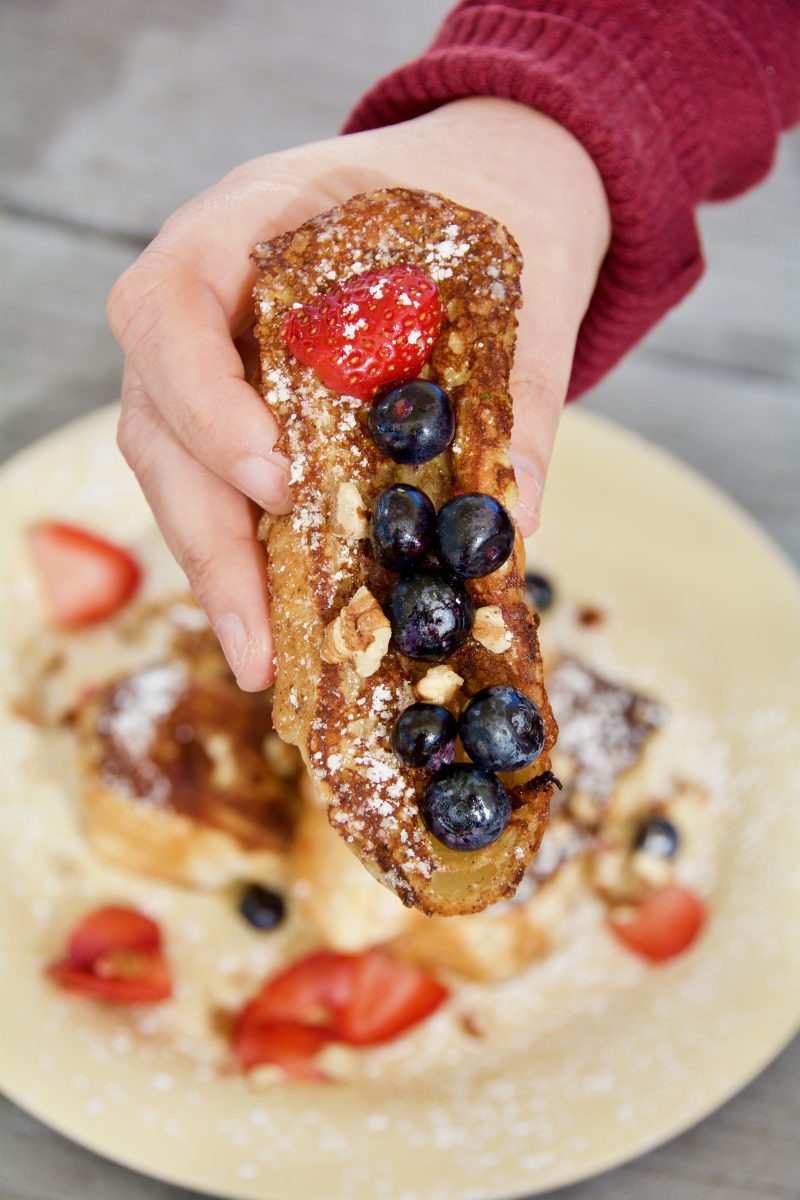 Caramelized Croissant French Toast is made with a little instant coffee touch to make the caramelization to the butterfly cut croissant. It’s nicely flavored with fluffy texture and topped with fresh fruit and walnut pieces. I can guarantee that almost everyone would love this dish if they’re not sure what to order from the menu.

Not only did I try the brunch menu, but I also tried some popular dishes and sides from their lunch and dinner menu. 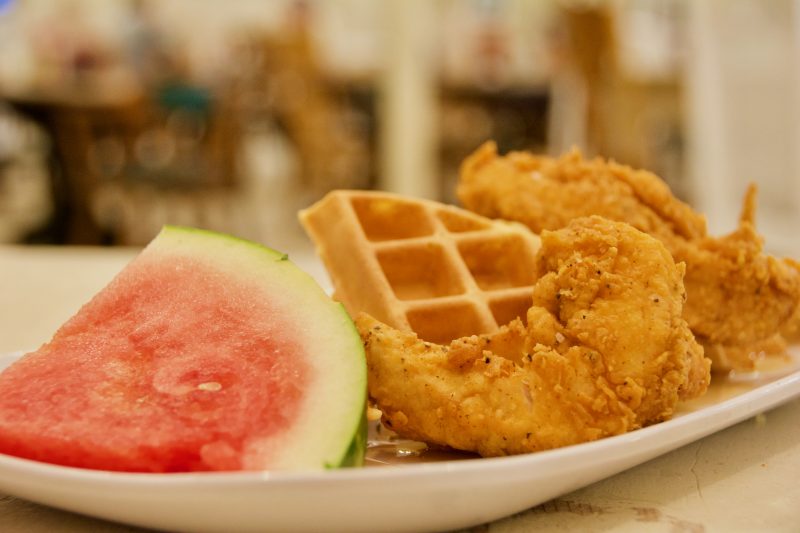 Chicken & Waffles – With Maple Bourbon Syrup. Getting this meal will earn you a biscuit and two sides. The two sides we chose with this dish were bread pudding and cream corn. 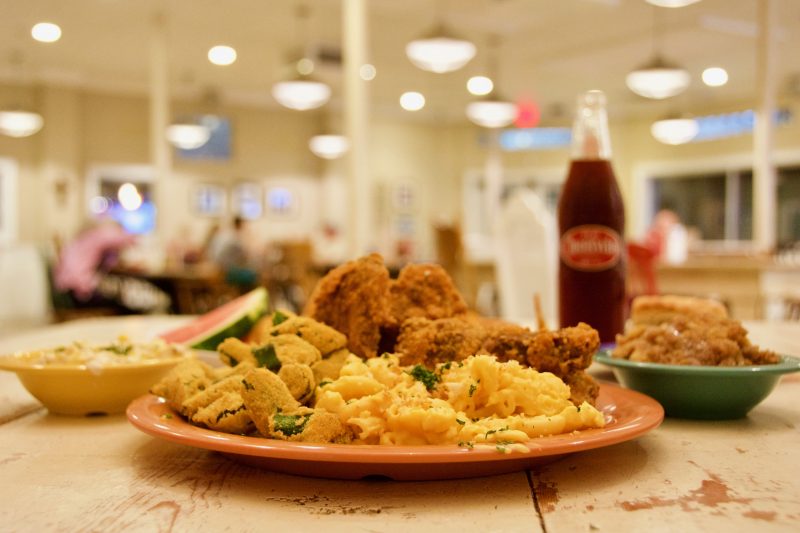 The biscuit is flaky on the outside but dense on the inside, which is different in a great way for biscuits because it makes it moist. The bread pudding was my favorite side and was the right amount of sweetness. The cream corn has a slight sweetness to it as well; the corn’s texture adds a touch to the creaminess of the dish. 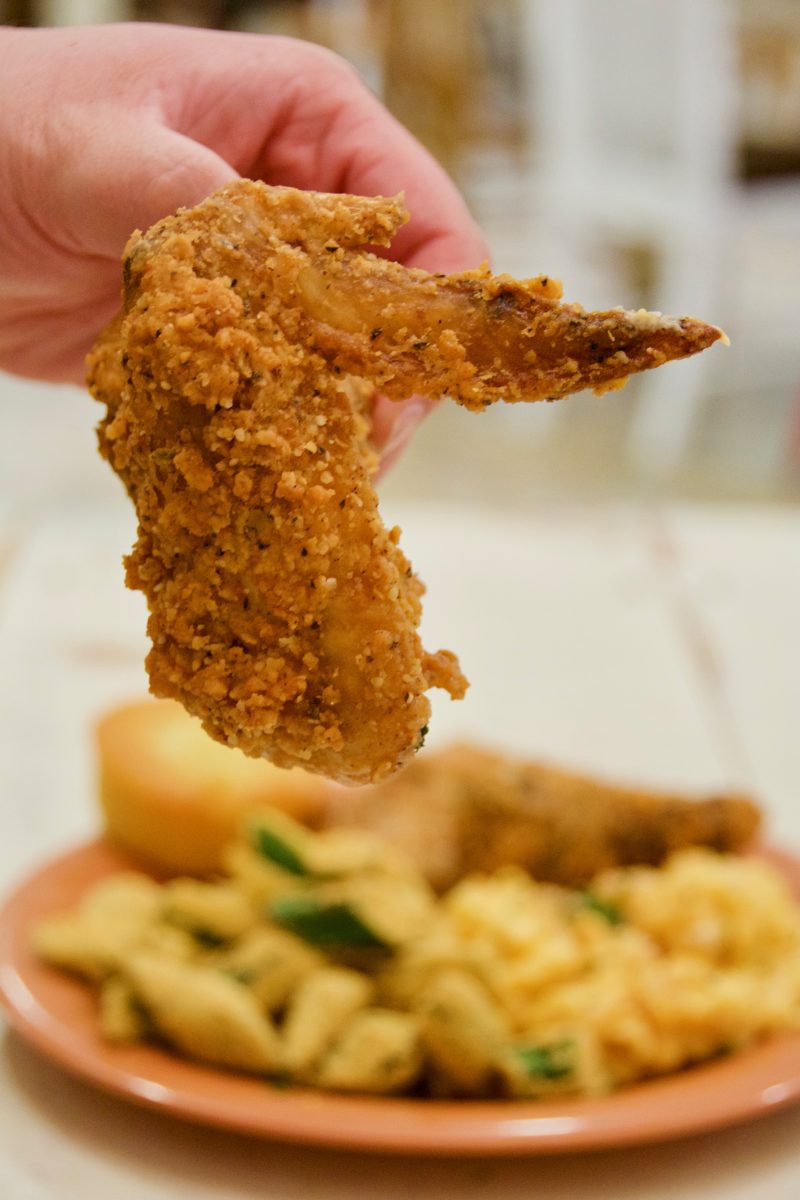 The 3 Piece Fried Chicken meal also came with a biscuit, but it was traded in for their skillet cornbread. For the two sides, fresh fried okra and mac & cheese were picked. 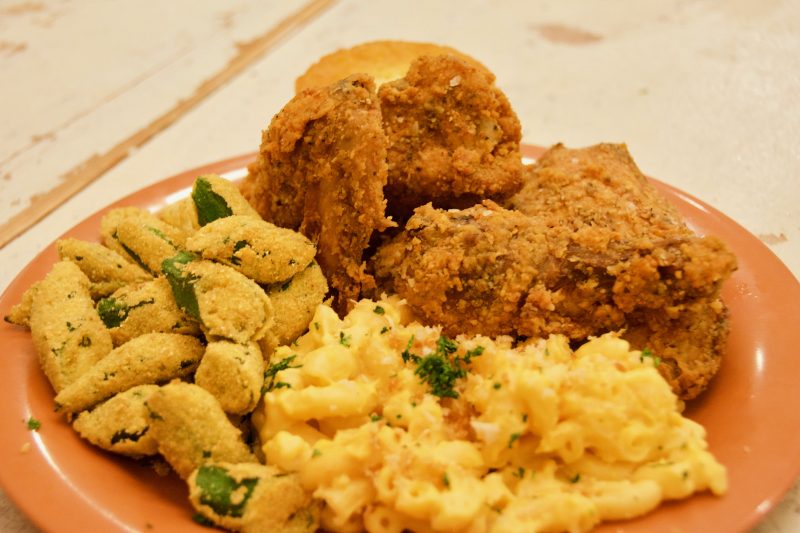 The skillet cornbread is made with bacon and other touches to add a savory to the slight sweetness. The fried chicken is coated with such delicious flavors and herbs that I’d love to eat all day. I would if it wouldn’t result in a heart attack. The fried okra was definitely fresh, but could use some spices. The mac & cheese was absolutely creamy like the cream corn. 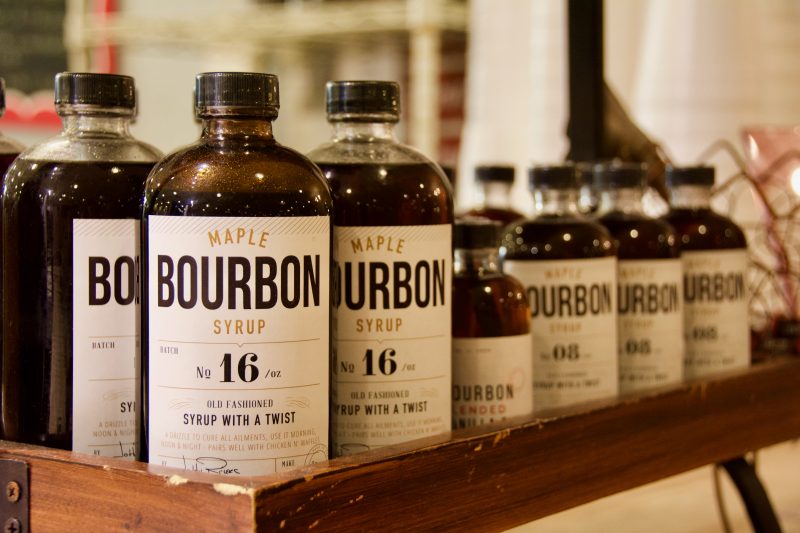 When you stop in, don’t forget to buy a bottle of their maple bourbon. I forget every time and I regret it. Maybe it is my excuse to come back for more food!

For more information, visit The Coop.

How to Help in Orlando after this Weekend’s Attacks – OrlandoUnited,...