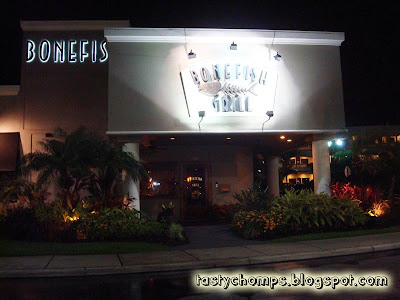 On the way to watch the newly revamped Star Trek film at the Festival Bay mall’s Cinemark movie theatre, we stop by the Dr Phillips area on “Restaurant Row” to dine in for dinner. My partner and I had heard of Bonefish Grill before (not to be confused with Fish Bones down the street or Moon Fish across the street), and wanted to try their seafood offerings. We were in for a pleasant surprise.

Upon entering, there was lounge music playing in the background, alternating between bossa nova to other city sounds, definitely giving the place a urban-modern feel. The tan colored walls and dim lighting gave the restaurant a sophisticated atmosphere and yet at the same time still very relaxed and down to earth.

We begin our order with an appetizer: crabcakes (2 for $9.90). The crab cakes are crispy on the outside and filled with jumbo lump crab on the inside. Hardly any of the cheap “cake” breading that is often found in lower end crabcakes, and definitely more delicious lumps of white crab meat than anything. My partner remarked that this is the probably the best crabcake she has had so far in Orlando. The crabcakes came with a zingy tartar/mayo sauce. 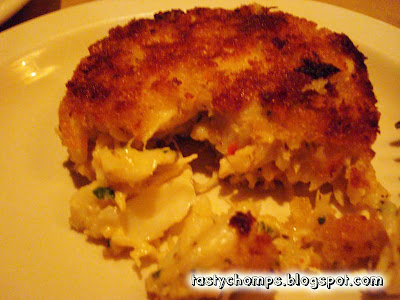 close up of the crabcake

We also get a cup of corn chowder with lump crab soup ($2.70 with entree) that was acceptable although not the best corn chowder ever, it was fresh and the lump crab meat was generous. It was a tad bit bland and may have needed some seasoning. 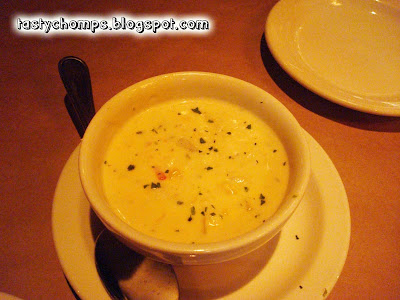 Bonefish Grill’s Corn chowder with lump crab was okay.
My partner orders the Imperial Longfin ($17.50) , a longfin tilapia pan-seared, baked and stuffed with shrimp, scallops and crab meat. Clean and slightly sweet-tasting, the tilapia has a slightly-soft, white and flaky texture. The dish is large and filling, served with a side of corn, lima beans and tomatoes. The mashed potatoes were slightly garlicky and slightly salty. But overall Bonefish Grill’s Imperial Longfin is a royally tasty offering. 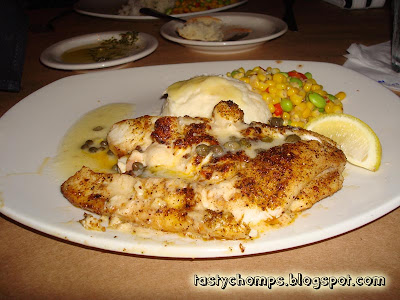 Imperial Longfin, stuffed with shrimp, scallops, and crab meat
I order the Atlantic Swordfish topped with spinach, gorgonzola cheese and bacon ($17.90). The swordfish came and I was taken aback. It was huge. The size of a large steak, it definitely would be called a fish steak. The swordfish at BoneFish Grill was a special of the evening and was absolutely a great item. The swordfish was tender and the toppings went well with the dish. The gorgonzola was sharp and slightly bitter and I had to cut out some of it to give the dish a better balance. The fish also may have used some extra seasoning, maybe some lemon juice would go well. 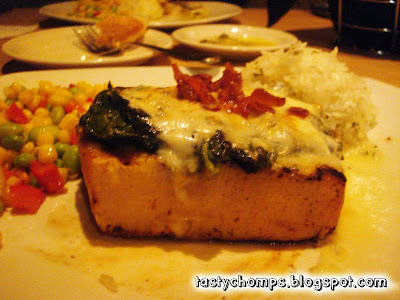 The ginormous Atlantic Swordfish topped with spinach, gorgonzola, and bacon

For our dessert, we ordered the incredibly rich chocolate brownie ($5.50) that was made without flour and served with a side of vanilla ice cream and raspberry sauce, topped with macadamia nuts and whipped cream. The dessert was as big as my head and tasted amazing. It was the best dessert I have had in a long time. 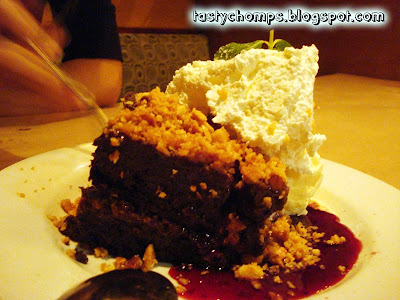 The chocolate brownie topped with macademia nuts and whipped cream with a side of vanilla ice cream and rasperry sauce.

For the prices, everything at Bonefish Grill was reasonable and the portions more than made up for cost. Service at Bonefish Grill was good, the waitress was attentive and caring with a slight sense of humor. The dishes all arrived promptly to our table and we were able to catch our movie at Festival Bay on time. Star Trek proved to be a great revamping and had all the fun summer blockbuster features from explosions and exciting action sequences to high tech graphics. That “mall” needs a good revamping though, not sure why it sucks so much but they need to get their act together especially in this recession.