On the way to St Marks Place, my brother Joseph aka Icebox from the St John’s University in nearby Queens, tells me, “where we’re going tonight, its best if we get wasted first and then head out to the joint. After a night of drinking, the chicken on rice is amazing.”

I am cautious of foods that only taste good when you’re under the influence, probably resulting in the numbing effect of at least one of your senses, but I take his advice to heart and we head out to St Marks Place to check out the local digs.

After arriving in St Marks, we walked around for a bit, taking in the musky night air of Manhattan, noticing the yuppie passerbys crawling out of the Japanese ramen and yakitori shops still open this late at night.

We headed to the Continental bar.

We actually had walked by this place earlier in the day and noticed the sign above the doorway of the Continental bar: “$10 for 5 shots of anything! (Yes, We’re Serious!)

The Continental, situated in East Village near St Marks Place, services local NYU and other area collegiates who are out for cheap drinks and a night out on the town. Inside, the Continental is the same as every other seedy bar out there, dark and dimly lit, smelling of old wood finely aged with years of spilt drinks on its decks. The perfect place to begin a night in the city.

After a round of shots of Southern comfort, jack daniel’s, and straight up grey goose, satisfied and thoroughly flushed, we head out to take on more of the city.

The Cube or “Let’s take it for a spin”

Our next victim was found not too far away at the Cube, also known as the Alamo, the outdoor sculpture by Bernard Rosenthal, located in Astor Place.

This heaping giant block of metal is a popular meeting place for people in the East Village and earlier in the day, brother Ronny Chow, one of the greatest and most revered brothers ever alive, told me that it is a tradition to put travelers and tourists on top of the cube and spin them around for good luck. Sadly at that time there were too many people around the cube to try during the day.

This late at night however, the cube was ripe for some shenanigans. We decide to try our hand at spinning the cube around, a feat for the machismo in us all, challenging the 1.25 ton cube with our might. Thankfully, it is on a pivot and spins relatively easy. woo hoo!

After a couple spins, we had to head to the restroom but thankfully my brother Jackson of Rensselaer Polytechnic Institute was able to get to 53rd and 6th street first and save us a spot in line.

A poster for Julie and Julia

The Line at the 53rd and 6th Halal Cart

Located in Midtown and identified by the large rock landmark, the 53rd and 6th street Halal Cart is a veritable New York City institution. For the city that never sleeps, what better food is there than street food that stays open from 7:30PM – 4AM?

The Famous 53rd and 6th Halal cart is notorious far and wide for their chicken and rice, having won first place in the 1st annual street meat palooza competition at Midtownlunch.com and also featured in a New York Times article on the advent of the meat vendors in the city.

It is renown as one of the best hangover foods around, and we can see that a line has formed up the block to get a taste of the yellow rice topped with lettuce, hot succulent chicken, and topped of course with the banging and mysterious “white sauce”. There is a extra spicy hot sauce available as well, but you have to be cautious as it is pretty spicy…

This intersection at 53rd and 6th is also notorious for its rivalry of street meat carts, as a imposter! cart has set up across the street replete with their yellow shirts and even circular metal pan containers. But you know which one to go to because the “real” one has the extra longer line, and also, they have these cool yellow bags that say “Halal cart: We are Different”

After getting our chicken on rice, chicken and lamb on rice combos, we stood in the plaza nearby and consumed our long awaited meals.

Wow, it really was, as they say in New York, “mad” good, yo. I am happy to have tried the 53rd and 6th halal cart and tasted its delicious chicken on rice. The white sauce makes the dish so tasty, as if all the elements of the universe came together and conspired to make an ultimate dish made with chicken, rice, and all the goodies in between.

Tasty to the last bite. 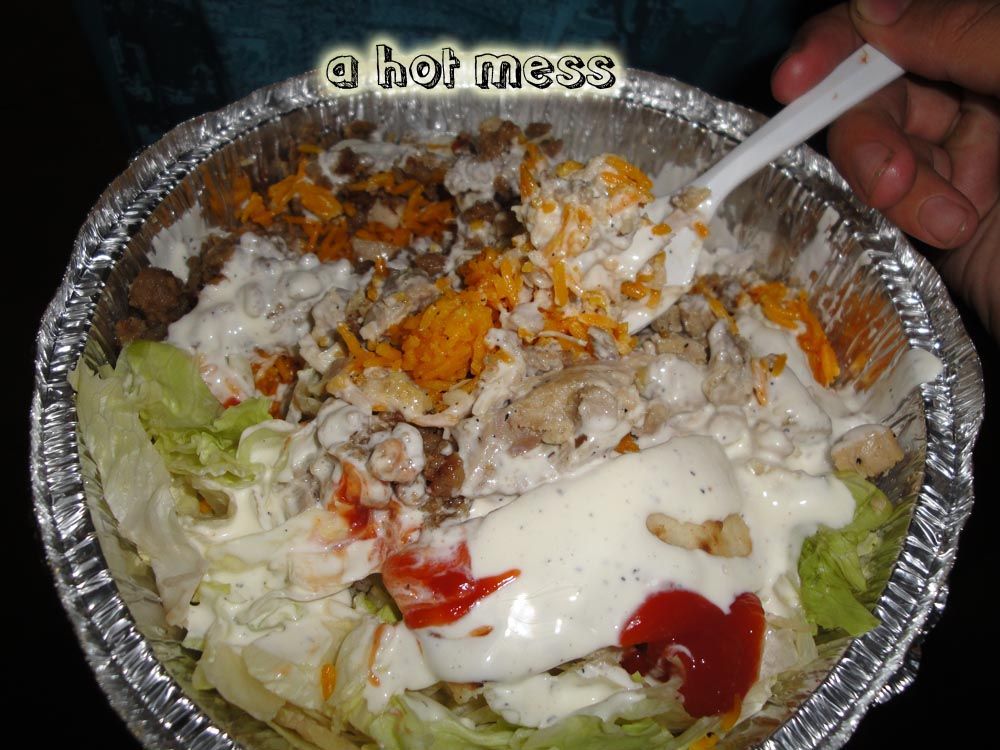