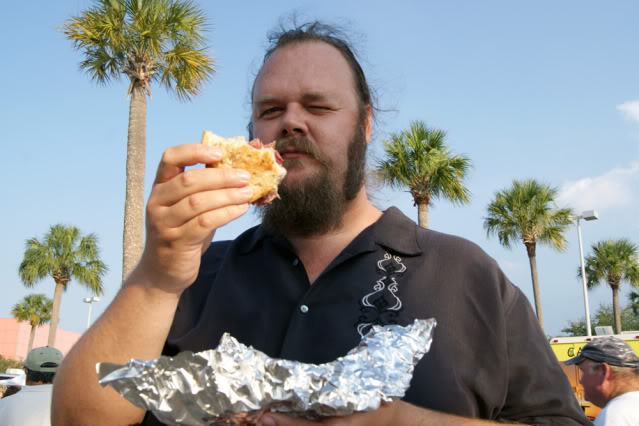 Last Sunday, on June 12 2011, TheDailyCity.com hosted the first of a series of Summer Food Truck Bazaars rotating almost from week to week at three locations throughout Central Florida.

The event was hosted at the Oviedo Marketplace Mall, with the next bazaars occurring at the Orlando Fashion Square Mall and Parliament House.

I headed over to the home of friends and fellow bloggers Pearleen and Al (of Megayummo.com) to carpool over to the Oviedo Marketplace for the Food truck bazaar. Food bloggers teaming up to fight hunger and highway tolls!

The Oviedo Marketplace, a shadow of its former self and a relic of our once national obsession with indoor malls, gained great exposure due to this event. Maybe it will bring renewed attention to the Oviedo Mall and Fashion Square Mall and bring new foot traffic to their shops.

Hundreds of foodie followers from all over Central Florida descended upon the bazaar, lining up with their fold-up tailgating chairs, and then chowing down on the latest and greatest mobile grubs. Families, friends, parents, children, grandparents, people of all backgrounds came together at this spot to relish and celebrate in the only thing that binds them all: a love for food.

I thought the scene was fascinating, a community alive again.

The following is a list of future event dates and locations for theDailyCity.com’s Food truck bazaars:

Corned Beef Sandwich from the CS Brisket Bus via @eatlocalorlando

The Mango italian ice tasted “like they took a whole bunch of mangos and smashed it into the ice.” said Julius aka “Droolius“. It was fresh and definitely every bite tasted like biting into a fresh mango.

Pork arepas from Arepas El Cacao were amazing: filled with cheese, pork slices, and more all wraped in an arepa or rice cake. This is a dish most popular in Venezuela.