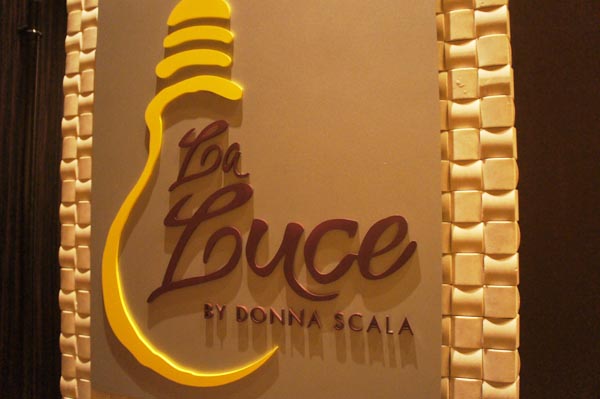 La Luce, Italian for the Light

Beautifully haunting scenes created with chalk hang inside the restaurant at La Luce inside the Hilton Orlando at Bonnet Creek. A fountain, a street scene, all images that will be swept away in a few months. The changing art of Edson Campos and Kathleen Brodeur capture the seasonality of the ever changing cuisine at La Luce, transforming every couple of months to something new and strikingly beautiful.

Art made from chalk at La Luce

We don’t often get the chance to go out to the hotel restaurants in our area to try their culinary offerings. Usually, it’s either due to budget constraints (where the corporate account card comes in handy for hotel visitors) or because they are often located far away in never, never land (where the tourists go). However, often times, because of the high traffic volume and the constancy of the crowds and their appetites, some of the best food in Orlando, arguably, can be found in these hotels. La Luce by Donna Scala inside the new Hilton at Bonnet Creek is one of them.

The story of how Bonnet Creek’s Wyndham, Waldorf Astoria, and Hilton hotels came to be is actually quite interesting. The pocket of land known as Bonnet Creek, though located well inside the Disney World complex, is actually not a part of Disney World. It’s kind of a rebel outpost, if you will. The owners of the land, so the story goes, never answered when Walt came by years ago to buy up the land. The land was never sold, until recently, when hotel developers came and made them an offer. I would imagine it was a considerable sum, an offer that they could not refuse. And so if you are driving to find the Bonnet Creek hotels, you will find nary a sign indicating how to find it inside Disney.

Back to La Luce.

La Luce’s Chef Donna Scala (of Napa Valley’s Bistro Don Giovanni), has earned a reputation throughout the culinary community as a food purist, with dishes that are prepared with the freshest local ingredients. An extremely passionate and very lively chef in person, Chef Donna recently visited Orlando to talk about her new seasonal items and answered questions.

Her favorite thing to cook? Pastas, she loves to make salads and pizzas but pasta is her favorite.

“People don’t take it (pasta) as seriously as they do in Italy, it is the heart of everything you do,” Donna said.

The menu at La Luce melds together Italian traditions and Napa Valley’s unique approach to fresh cuisine. Thin pizzas, lasagnas, fresh Italian cuisine prepared “the way it was meant to be: hearty, yet not overwhelming”.

While Chef Donna Scala is away in Napa Valley, Chef Alexander Rodrigues is Executive Chef for La Luce and Chef Ed Gee is Executive Pastry Chef. One of the chefs at La Luce, Chef Alberto Navarette has spent 19 years working alongside Donna Scala, developing his signature pasta dishes with a love for Italian ingredients. He started as a dishwasher and moved to every station until he came to where he is today.

Roasted Chicken and Pork on top of Pan-fried Faro
The chicken skin is cooked in duck fat, giving it a lovely, crispy duck flavor. The faro, an ancient Tuscan grain similar to barley, and a favorite of Donna’s, is toasted in the oven.

A creation of Francis Metais, Food and Beverage Director at Hilton Bonnet Creek, a Pastry Chef by training, this was my first time ever having this wonderful European style dessert made with pouring some espresso on top of the ice cream and roasted hazelnuts. Wonderful.

What I liked the most about the food at La Luce was how “light” everything felt, like the dishes at Seasons 52, where the fresh ingredients and cooking methods cause the dishes to taste so much more healthier without compromising the great, hearty flavor found in Italian cuisine. This often contrasts with a lot of the dishes out there today and what I think is so unique about La Luce. I can see why they recently won Best Hotel Restaurant in the Orlando Sentinel Foodies Awards 2011 and the great team for the Hilton Bonnet Creek’s Food and Beverage recently received top scores in excellence. Keep on shining!