Shula’s on the Beach – Steakhouse in Ft Lauderdale 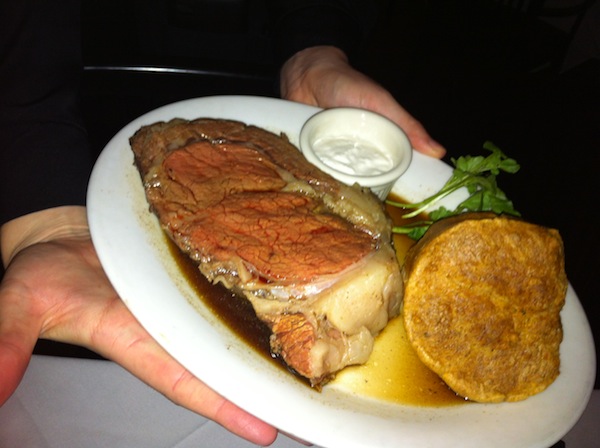 The first thing one notices as they enter Shula’s On The Beach is its amazing view of the Atlantic Ocean. The restaurant has an outside dining area for patrons to enjoy the South Florida breeze. The outside dining area also has a full bar if you just want to stop by to cool yourself down with a nice alcohol beverage after your stroll through the sand as well.

Tasty Chomps and associates were invited to celebrate the 40th Anniversary of the Miami Dolphin’s 1972 perfect season. As we sat down inside to prepare for the glorious meal to come, we were able to sample a special beverage created specifically for this occasion called the No Name Martini, named after the undefeated team made of team players that nobody knew. The martini was made of greygoose vodka, St. Germain sweet liqueur, freshly squeezed orange and lemon, and “home-made” secret foam. Usually I’m not a big fan of fruit cocktails, but this tasted like a refreshing citrus juice. The “home made” foam green foam had a slight hint of cucumber and celery. I couldn’t taste the alcohol, but don’t get me wrong, this drink is strong.

After our beverages we were served a various selection of appetizers. First we sampled the Blackened Tenderloin Tips with Béarnaise Sauce and Shula’s BBQ Sauce. Those who prefer their steaks more on the medium well side would love these tenderloin tips. Many other places that have had this item usually overcook their tips, but Don Shula’s have definitely kept the tenderness to these tenderloin tips. The Shula’s BBQ sauce was a great blend of sweet and tangy, more on the sweet side though. The Béarnaise sauce was not the basic creamy hollandaise tasting, you can actually taste the different blends of spices (shallots, peppercorn, tarragon, etc.).

After the tips, we had the Lobster Cocktail with Shula’s cocktail sauce and Béarnaise Sauce and lemon. This wasn’t a regular item on the menu, at least not yet, but it should be soon. The lobster came out at the perfect chilled temperature. The meat was sweet and firm confirming its freshness. Usually frozen lobster meat is bland and brittle.

Finally we moved onto the main course; the steaks! I had the 22-ounce Cowboy Ribeye while my companion had the 8-ounce Filet Mignon. There are two primary differences between the Shula Cut and many of the other beef cuts at other restaurants. First, only 1% of all beef makes the Shula Cut. Second, their steaks are wet-aged, meaning they’re vacuum-sealed to make sure the cuts retain their moisture (as opposed to dry aging). The biggest difference in taste between Shula’s wet-age and dry age is that, when you cut into a Shula cut, it doesn’t automatically bleed out all the juices. Each bite definitely retains its juiciness and beefy flavor as opposed to dry age where there are stronger influences of the seasonings used in the cooking process.

With our steaks we enjoyed the accompaniments of Shula’s Crab Mac and Cheese and Twice Backed Potato. The Crab Mac and Cheese was perfectly blended with the generous chunks of crab and melted cheese, instead of swimming in a cheese soup. It was topped with a toasted panko crust that made the entire dish delightfully creamy and seasoned. For the Twice Baked Potato, the twice-baking process makes the texture like a very firm mashed potato. It’s loaded with apple wood bacon and topped with melted cheese. This is definitely one decadent side dish.

Shula’s On The Beach was an elegant dining experience. The food was spectacular and the environment was relaxing.

A Look inside the Shula Restaurant