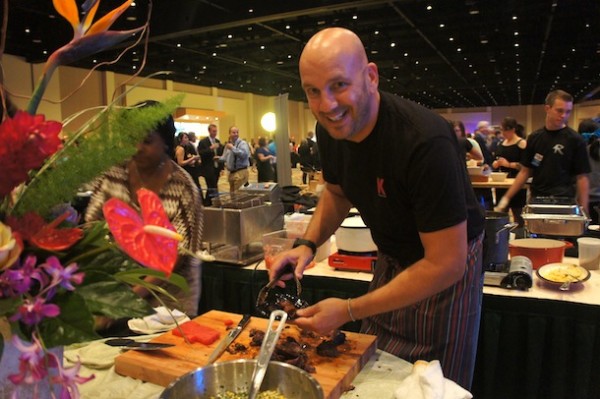 Share Our Strength’s Taste of the Nation Orlando event brings together the area’s top chefs who donate their time, talent and passion to end childhood hunger in Central Florida. Along with culinary delights, guests have the opportunity to sample select wines, cocktails and premium beers and enjoy silent and live auctions and entertainment. All proceeds raised benefit Share Our Strength’s efforts to eradicate childhood hunger. Local beneficiaries include Coalition for the Homeless of Central Florida and Second Harvest Food Bank of Central Florida.

Check out our recap of the 2013 Orlando Taste of the Nation here:
https://tastychomps.com/2013/08/2013-taste-of-the-nation-orlando-recap-photos.html

To celebrate their 25th year, Food Network Star Melissa d’Arabian will be joining us as a special guest! Host of the Food Network show Ten Dollar Dinners, D’Arabian has been a longtime advocate of childhood nutrition and hunger relief efforts through her ongoing support of Share Our Strength, a national nonprofit committed to ending childhood hunger in America by connecting children with nutritious food through innovative culinary fundraising events.

Power connector Helen Donegan, Vice President of Community Relations at the University of Central Florida, is Honorary Chair of this year’s Taste of the Nation Orlando. Listed over the years as one of Orlando’s 50 most powerful people in Orlando Magazine, Donegan is recognized among the area’s most well-networked citizens thanks to her past and present contributions to scores of civic and professional organizations. When she’s not planning events and executing programs for UCF, she is using her influence and status to support education, social services, health and arts, and provide valuable networking opportunities to local businesswomen. We are honored to have Helen Donegan use her energy, enthusiasm and influence to draw attention to Taste of the Nation’s legacy of combating childhood hunger.