Orlando #FoodieFriday News Round up – Hot and Rising 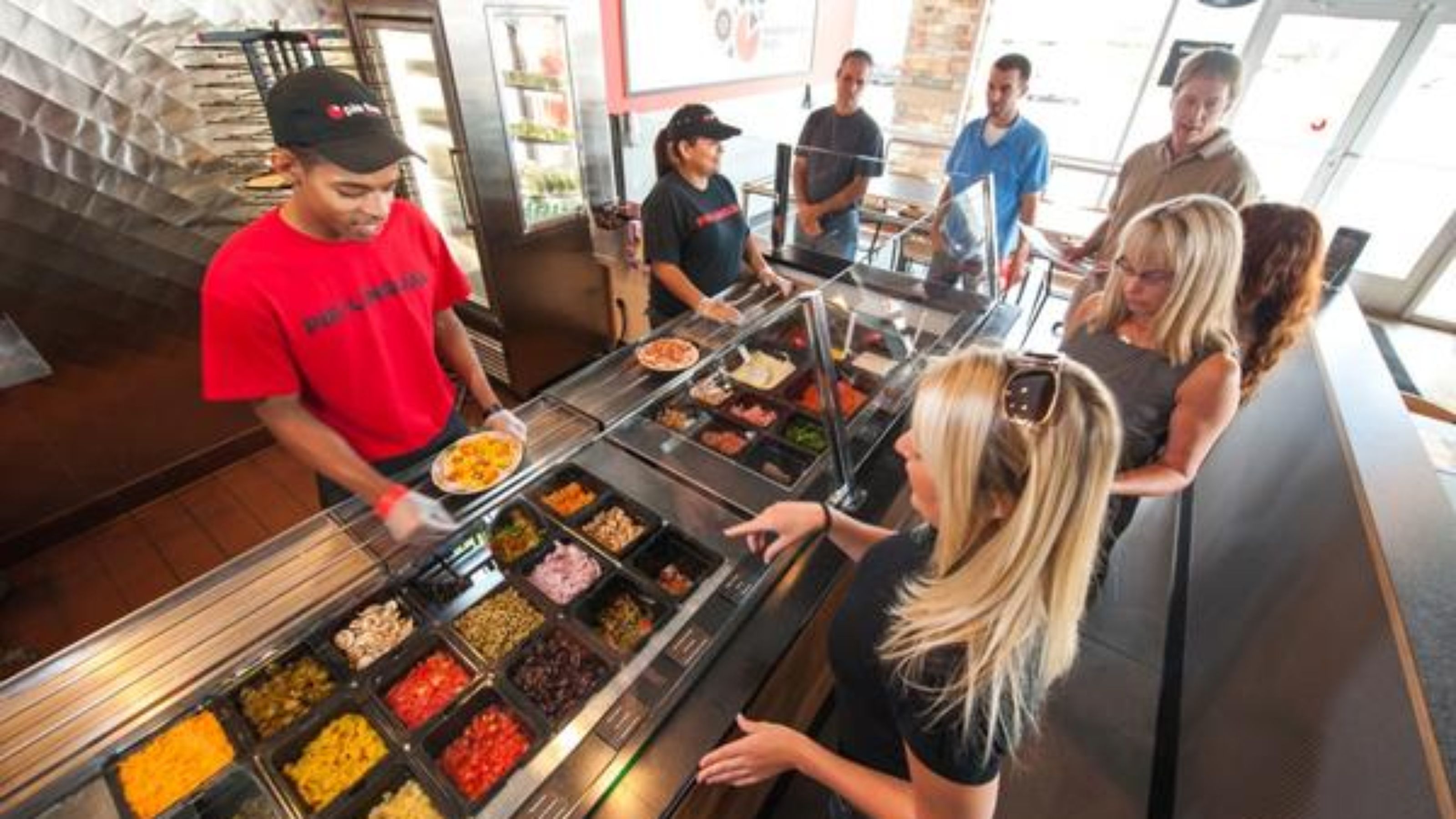 Discussing the latest in food and drink in Orlando this week

This week on the Orlando Foodie Forum we discussed a new food trend ready to hit Orlando: The Fast Casual Pizza Movement, a la Chipotle.

In a recent article on BusinessInsider, Pizza Studio, a franchise that launched in 2012 and currently has 30 locations around the country had a year-on-year revenue growth of $2.5 million in 2013… and $11.5 million in 2014. According to Forbes, they’re “adapting the quick and made-to-order model, championed by Chipotle and Subway, to pizza.”

“For a fast-casual restaurant, Pizza Studio is competitively priced—$7.99 for an 11-inch personal pie—but its product is way more personalized than at most pizza joints. Customers choose their crust, sauce, cheese, and unlimited toppings which includes meats, vegetables, and seasoning. What’s more, the options are good. You can build your ideal pizza on a rosemary herb or whole grain and flaxseed base, sprinkle it with feta or goats cheese, throw on three different types of peppers and nitrate-free pepperoni, and then finish it with Old Bay Seasoning or truffle salt. Those are the kinds of ingredients you’d expect at a higher-end pizzeria, and yet Pizza Studio doesn’t sacrifice affordability or speed: high-tech convection ovens mean each pie only takes two minutes to cook.”

The Dallas based Pie Five, which takes over the space once occupied by Greens and Grille on University, promises to have pizzas ready within 5 minutes and is looking to aggressively expand to over 25 locations in Florida within the year.

Blaze Pizza which promises “Fast-Fire’d Custom Built Artisanal Pizzas” is set to open at the new Plaza on Alafaya and University near Bar Louie’s, priced at a very competitive $6.85 for a 12 inch personalized pizza, all oven cooked in under 180 seconds (3 minutes). 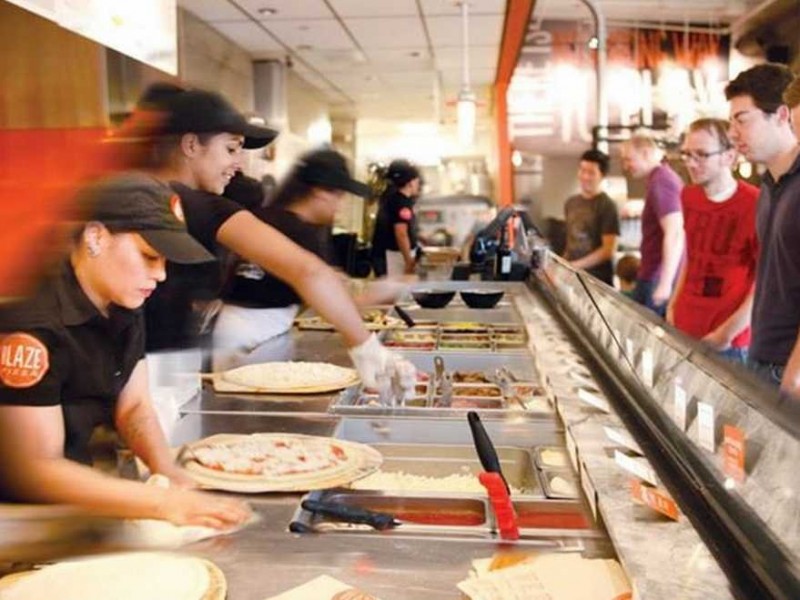 There have been other “personalized” pizza places open in Orlando, most notably Pie-Fection in the Universal area and Chomp Chomp Pizza (no affiliation) in Winter Park. Chomp Chomp closed last year and is now a Marco’s Pizza. Lisa Wilk of TasteCookSip.com tells us, “Pizza was good, crust was meh. Like manufactured, refrigerated dough. Great oven, though.” To hear and participate in all the latest in Orlando food – join the Orlando Foodie Forum on Facebook today 🙂

Orlando was also recently mentioned in Wine Enthusiast magazine and New York Times as one of the top places to go in 2015, particularly for our developing food scene!

“Expect the unexpected in Orlando. Shrugging off its just-for-kids image, it sports brag-inducing eats and world-class wine experiences, particularly in new neighborhoods like the Mills 50 District and Winter Park. Ricky Ly, author of The Food Lovers’ Guide to Orlando, points to nominations of several local chefs for James Beard Foundation awards to illustrate the city’s culinary chops. “From hidden speakeasies like The Pharmacy, to the Basque-style restaurant, Txokos Basque Kitchen, serving cola-and-wine-braised kalimotxos pork belly, there is something to be found for every wine and food lover just outside the theme park gates.” ”

Disney World will no doubt remain the biggest draw to Orlando, but the city is growing up thanks to a string of civic developments, including the $429 million Dr. Phillips Performing Arts Center, the 62-mile-long SunRail commuter train, both opened last year, and a coming 19,500-seat soccer stadium set to open this year. But the most surprising development is the food scene. East End Market, and its stalls selling locavore fare and artisanal baked goods, opened in 2013. Last year saw the opening of Txokos Basque Kitchen, whose chef was nominated for a James Beard Award. Not to be outdone, two fellow Beard nominees, James and Julie Petrakis (The Ravenous Pig, Cask & Larder), announced the February opening of Swine & Sons Provisions, their market/restaurant hybrid. Theme parks are expanding adult options as well: the elegant Four Seasons Resort Orlando at Walt Disney World opened in August 2014 and features a golf course, a rooftop lounge and an adults-only pool. Adam H. Graham”

Also, this weekend is the North American Chowzter Awards 2014, where local Orlando restaurants 4 Rivers Smokehouse and Chuan Lu Garden were both nominated. 4 Rivers was nominate for Best BBQ for their smoked angus brisket while Chuan Lu Garden was nominated for their Chongqing La Zi Fried Chicken. Chowzter is a global network of the world’s most celebrated food experts and writers, all searching for the tastiest Fast Feasts on the planet. Prepared by passionate and inspired artisans, Fast Feasts are locally sourced, freshly prepared, served hot on the spot and enjoyed immediately. The best of these Fast Feasts reflect the local culture, history and traditions of their cities and countries of origin. The awards are held in New Orleans this year which I will attend as a Chief Chowzter for Orlando.

Urban Tide is the new coastal concept opening in the restaurant space formerly known as Napa at the Hyatt Regency Orlando on International Drive. Guest feedback inspired the hotel to create the new seafood-focused restaurant after they learned that their trademark rights to the name “Napa” would expire at the end of 2014.

Chuy’s, the Austin-based restaurant famous for its authentic and crave-able Tex-Mex menu, today announced it will hire an estimated 170 new employees, including full-time and part-time positions, for their third location in the Orlando area. Chuy’s newest restaurant is scheduled to open in February 2015 and will be located at 6688 S. Semoran Boulevard, minutes from the Orlando International Airport.
Chuy’s will be hiring a variety of positions, including front-of-the-house hosts, servers, bussers and bartenders. The restaurant is also hiring kitchen staff to help prepare its made from scratch dishes and signature sauces. Among the positions available at Chuy’s, the tortilla “experts” illustrate the restaurant’s commitment to authentic and fresh Tex-Mex. By making each hand-rolled tortilla to order on a comal located in the main dining room, they offer a peek at the philosophy of freshness that sets Chuy’s apart. Chuy’s staff can expect high volume with lots of fun. Interested applicants should apply at the hiring RV located at the future restaurant site at 6688 S. Semoran Boulevard Monday-Saturday from 9:00 a.m. to 5:00 p.m. To learn more about employment at Chuy’s, please visit Chuys.com/#/employment.

Tin Roof is a live music joint where people can hang out, drink and dine, and enjoy live music almost every night of the week. Located at I-Drive 360, Tin Roof’s outdoor seating offers some of the best views of the giant observation wheel. Music fans will be able to hear some of the top local and regional bands; foodies will find a killer menu filled with unique dishes bursting with flavor. Headquartered in Nashville, this is the company’s 14th location and its first in Florida.

WHERE: Tin Roof is located at 8371 International Drive at I-Drive 360. Parking is available in the garage or by valet for free. 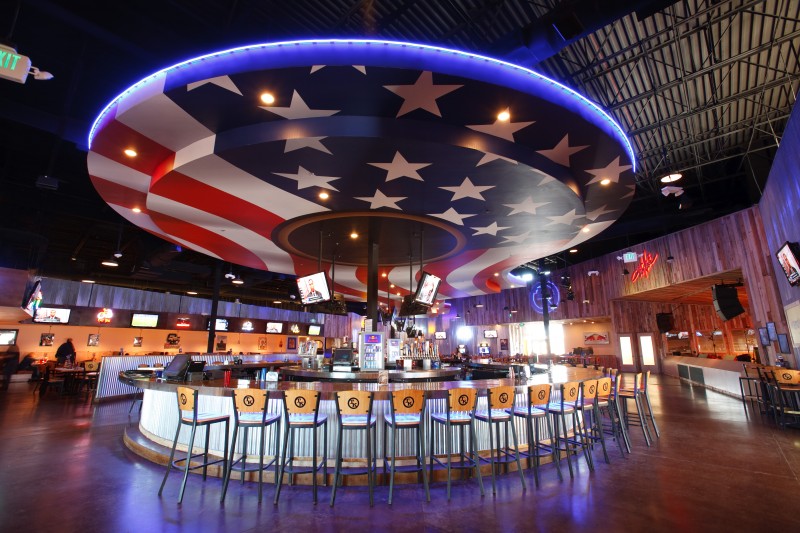 Toby Keith’s I Love This Bar & Grill is proud to officially announce its opening at Artegon Marketplace, the newest retail, restaurant and entertainment attraction in Orlando, Fla. The Artegon Marketplace launch marks the final restaurant opening of 2014 for Boomtown Entertainment. As Phoenix-based Boomtown Entertainment continues to expand in further markets, the nationally-recognized hospitality group, is proud to be an anchor store at the 1.1 million-square-foot shopping attraction and artisan marketplace.

Christner’s Prime Steak & Lobster (“Christner’s”), a steakhouse staple in Central Florida is refreshing its bar program with a menu featuring new cocktails set to unveil at its inaugural Christner’s Craft Wars. All about the bar, on Saturday, January 17 from 5:30 to 7:30 p.m., three of Christner’s resident bartenders will go head-to-head in three rounds of craft cocktail making with the winner dueling it out for charity and bragging rights.

For $20, guests will gain access to the event. All cocktails will be judged based on originality, taste and the uniqueness of its name; the three rounds of cocktail creations include the Christner’s Classic; the bourbon cocktail and the “secret ingredient” mixed cocktail.
Christner’s bartender’s Jeannie Rudnick, Kyle Laufenberg and Stacy Word will be partnered with three local charities –Central Florida Food and Outreach, Florida Hospital Diabetes Institute and Runway to Hope – and the bartender with the most tips at the end of the three rounds will select the cocktail of his/her choice to be featured as a limited-time-only drink on Christner’s bar menu. Tickets will be given back to all attendees in the way of “tipping tokens.”

All guests are asked to RVSP via e-mail to Christners@rockawaypr.com.