The Wrays of Peterbrooke Chocolatier of Winter Park visit Madagascar 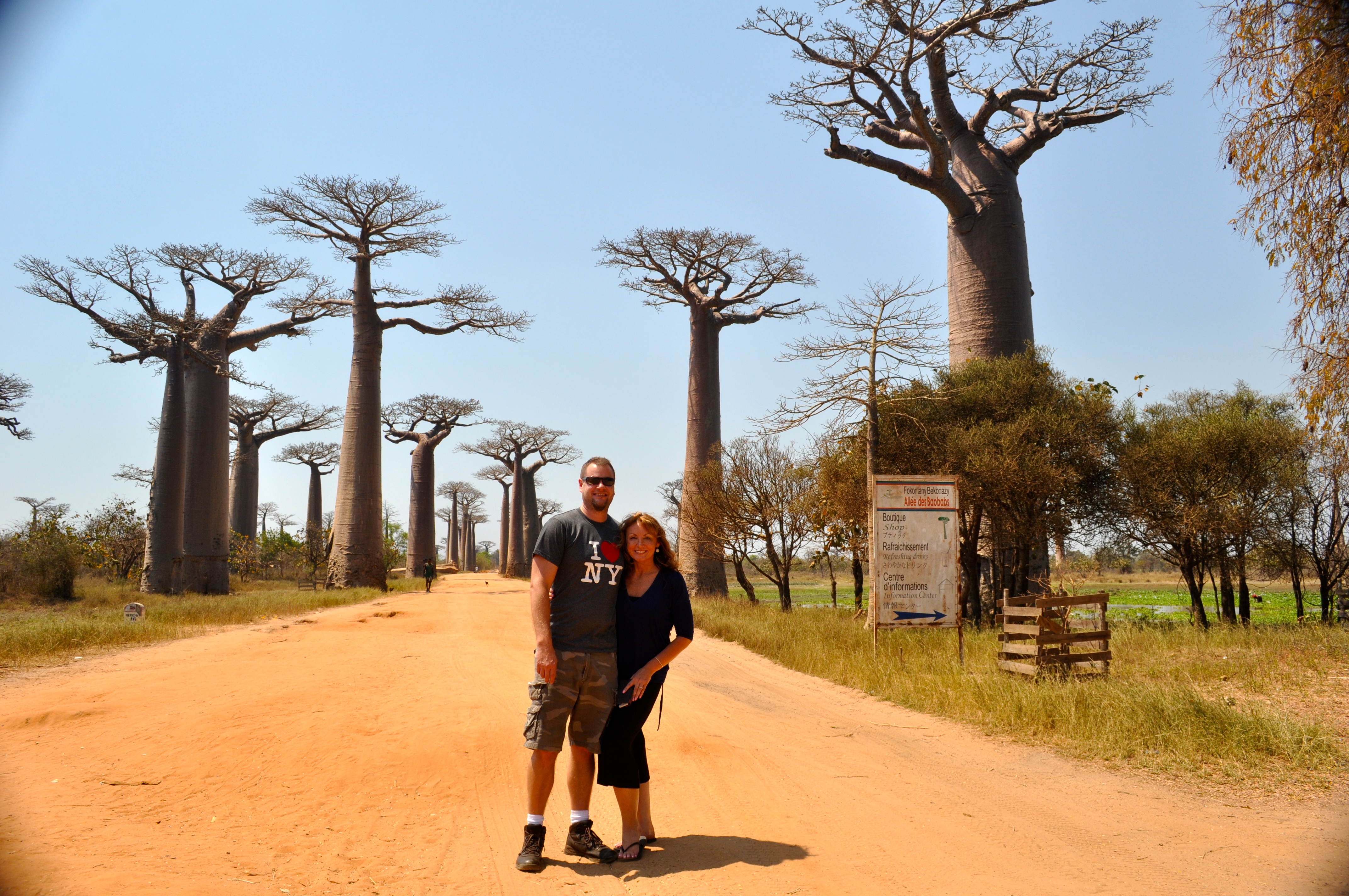 We spoke with Jami Wray, one half of the dynamic couple along with her husband Kevin Wray who own and operate Peterbrook Chocolatier of Winter Park, a lovely fixture on charming Park Avenue. They are actively involved in our local and global communities and also believe it’s our responsibility and honor to do so.

The pair recently went on a tour of Madagascar with a Melagasy entrepreneur friend named Manitra Rakotoarivelo they met last August here in Orlando at a biblical entrepreneurship competition. 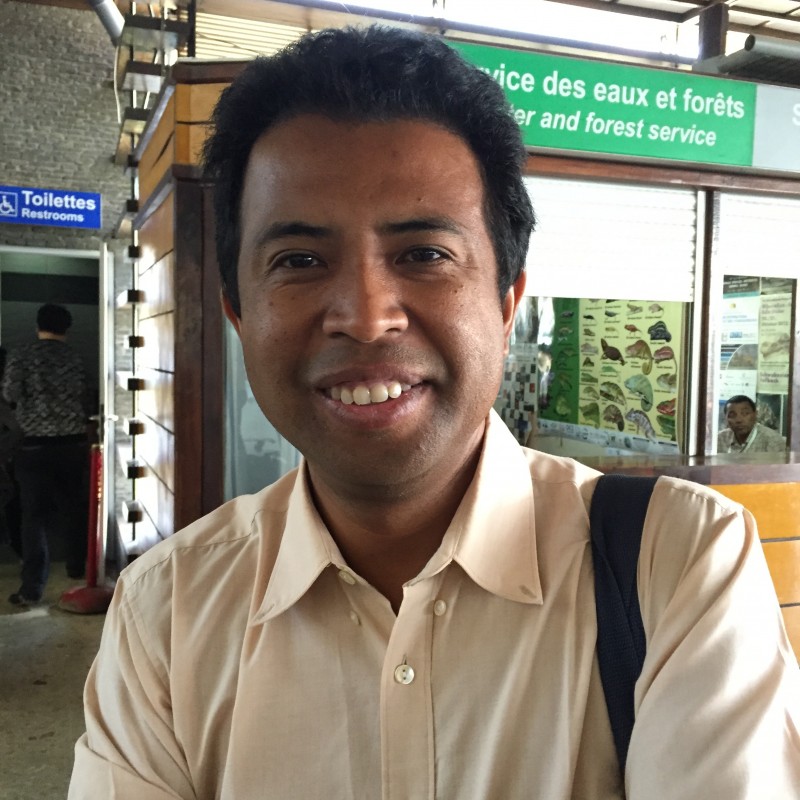 The new friend Manitra – who won the entrepreneurship competition – has a vanilla manufacturing business in Madagascar and his mission in life is to bring vanilla farmers out of poverty and educate impoverished children.

To date, he’s helped to open 30 schools and educated over 5000 Malagasy children.

Jami tells us, “We were inspired by his altruism and made the journey partly to see if there was an opportunity to do the same kind of work with cacao.”

Before the trip, they did not know much about Madagascar, besides the fact that Madagascar was one of the poorest countries in the world where 91% of the country lives on less than US $2/day.

“We knew of the struggle to make a living while preserving natural resources. We knew it was a biologically segregated region of the world home to many species found only in Madagascar, including the famous lemurs.”

“When I first did a Google search for Madagascar one of the images that came up on the screen was a Baobab tree. I love nature and giant trees (we visited the Redwoods in California last year) so I knew I had to see those when we went there.”

TastyChomps: What were your favorite moments from your trip to Madagascar?

Jami: Visiting the cacao plantations/farms was magical to me! I got to lie down on a bed of cacao pods and I felt like I was in a dream. 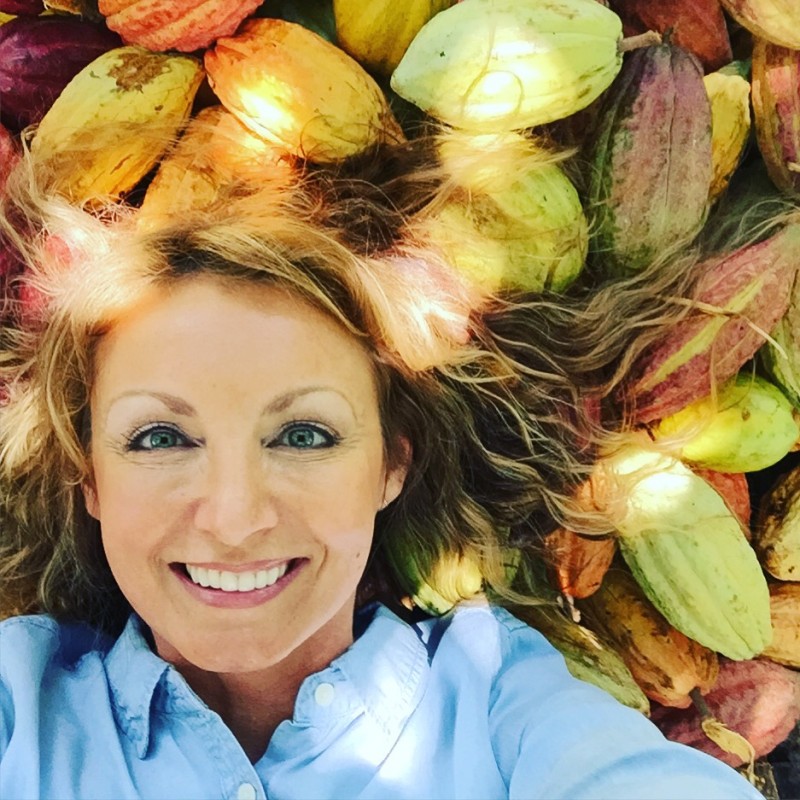 While we were at the cocoa plantations we were able to see cocoa trees being planted, raised, harvested and the multiple steps needed to produce cocoa. It was really amazing to learn, first hand, how much work goes into growing cacao and to meet some of the people who make it happen. 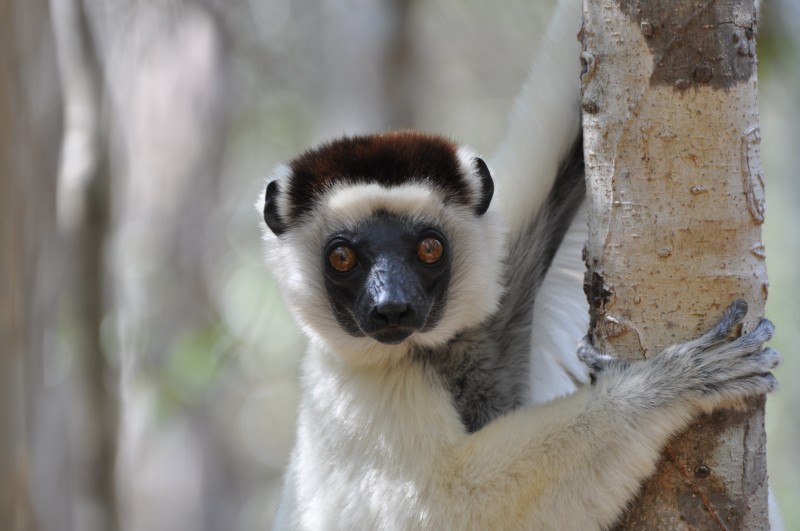 We also loved hiking through the nature preserves, seeing several species of lemur, hiking through/climbing the Tsingy (natural limestone formations, also referred to as rock forests) and interacting with the local people.

We made some great new friends and got to visit the friends we met last August. The people of Madagascar are extremely warm and friendly.

Any favorite foods / dishes that you tried in Madagascar?

We enjoyed coconut rice with Zebu filets, as well as traditional meals served by a family we stayed with. Chicken in a ginger and chili broth, mixed meats in green peppercorn sauce and fish (mostly tilapia) in a broth flavored with local spices were all amazing.

Ironically, one of our favorite meals was some exceptional pizza we enjoyed on our way through the highlands…Sometimes a taste from home just hits the spot. 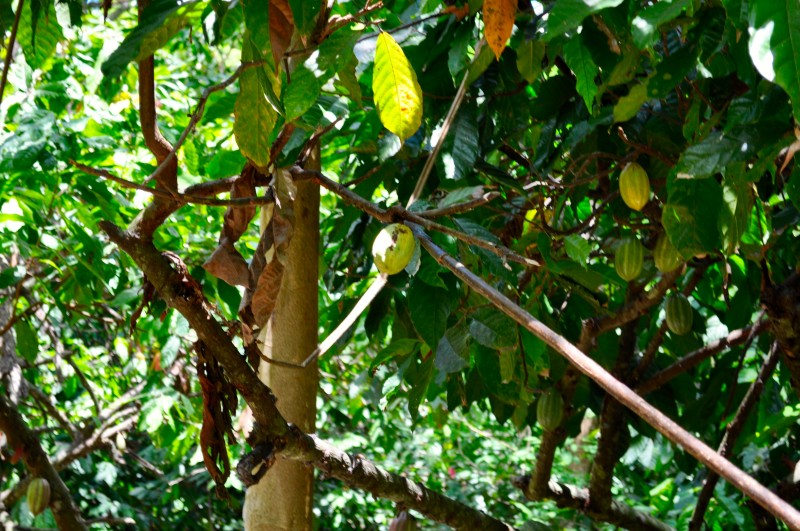 What did you learn while you were in Madagascar?

In addition to the cocoa production, we learned how the poorest people, mostly farmers (of all crops), work so hard every day just to survive. We learned about the competing pressures of growing food and the need to preserve the natural beauty of the region. How do you admonish people who are just trying to feed their family for converting forest to farmland? There are many programs now in place working to give the farmers better practices and offering incentives to protect the land. 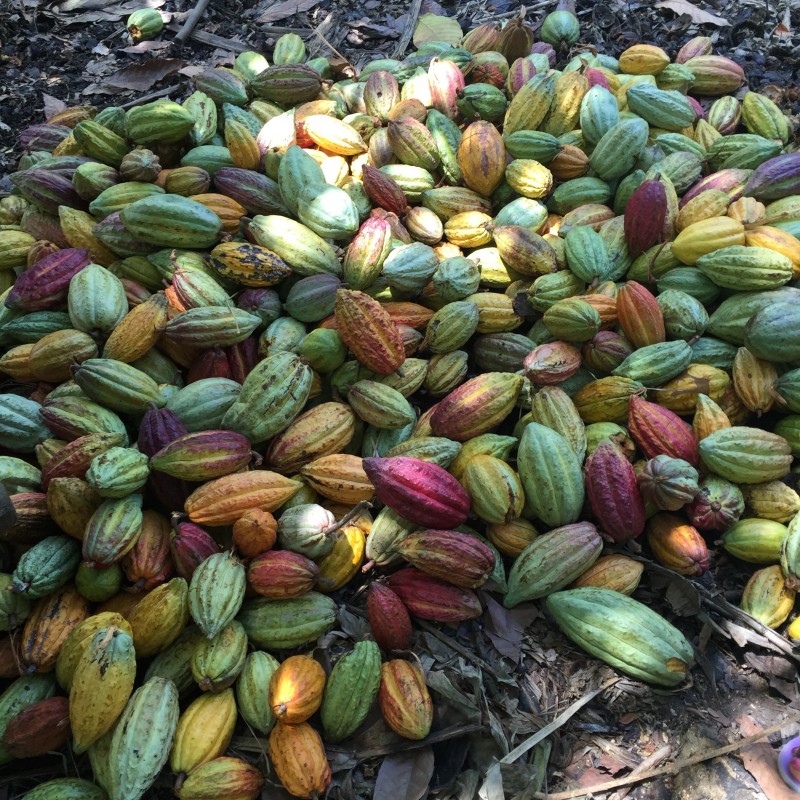 We learned a lot about the Malagasy culture, a ton about growing cacao, many facts about Madagascar and even some new words, but I think the most important thing we came home with was a renewed sense of gratitude for our livelihood here and a deep desire to want to do something to help over there. We’ve traveled to a lot of developing (third world) countries but have never seen the type of widespread poverty as we did in Madagascar. It touched our hearts very deeply.

What are some interesting facts about chocolate and the cacao plants that most folks might not know?

Cacao is only grown 15-20 degrees north or south of the equator. It takes a cacao tree about 4-5 years to produce fruit. Most everything in the early stages of cacao farming is done by hand rather than by machines. There is an unbelievable amount of work that goes into getting cacao from the pod to the beans before they’re sold to be processed into chocolate. 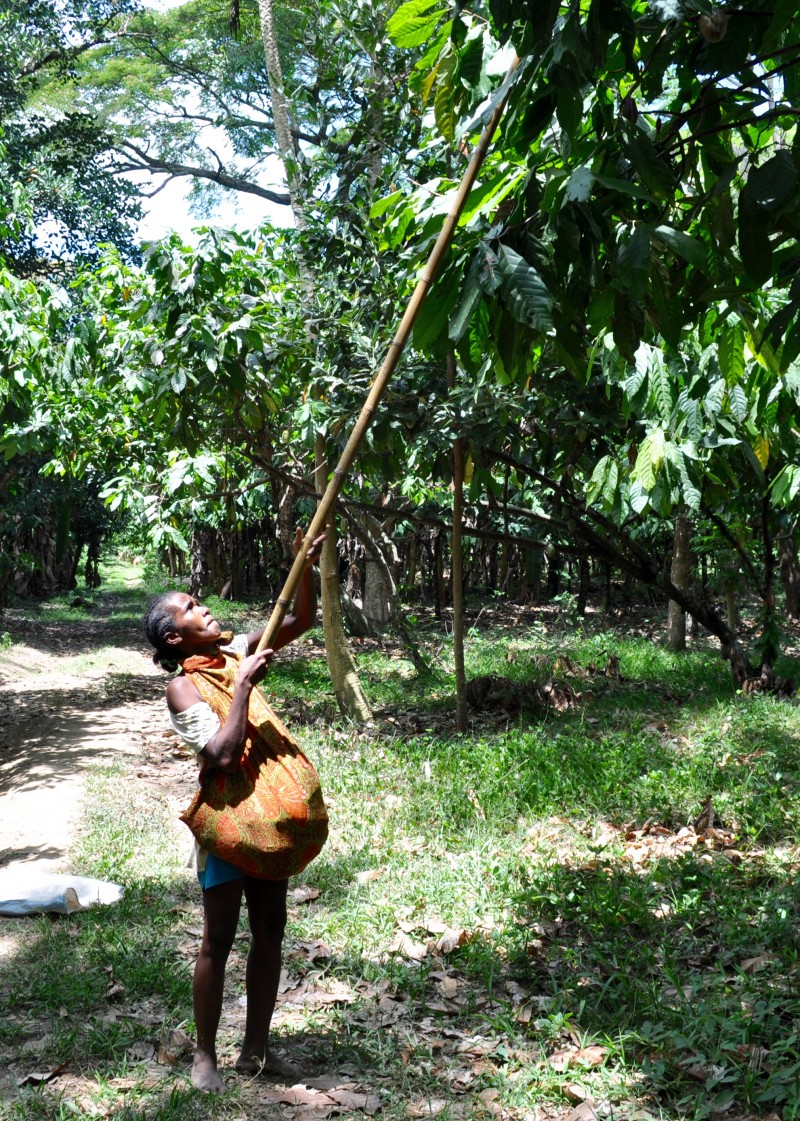 Each cacao pod is hand cut off the trees one-by-one using long, stick-like poles with blades on the ends and then the workers carry them in pouches strapped to their bodies to a central location. 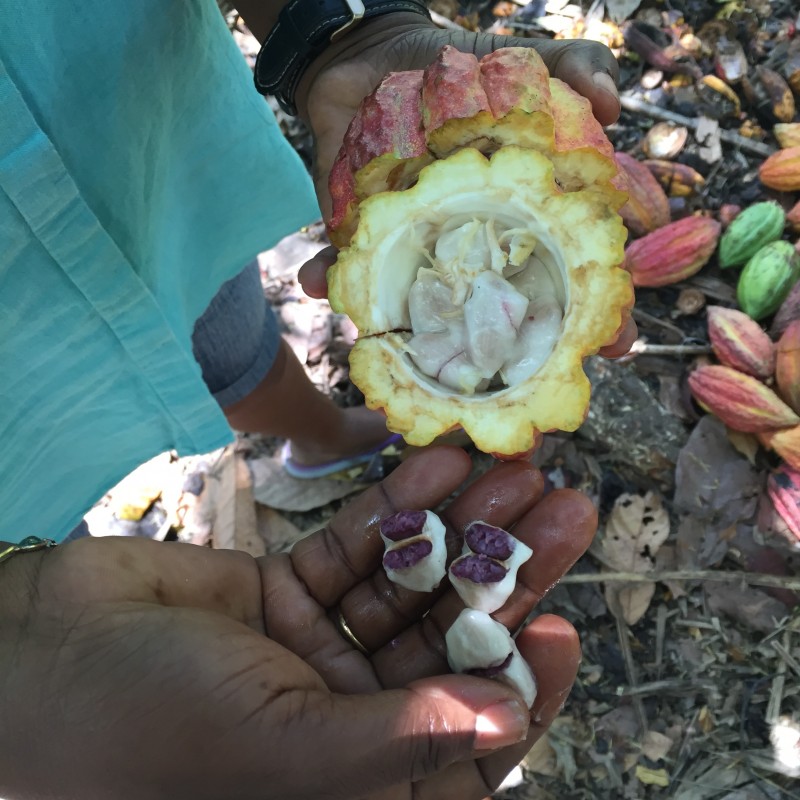 From there, they are put into a wagon where a Zebu, a species of cattle, pulls them to another location for workers to split open. Workers use machetes to split open the pods to remove the membranes and place them on banana leaves. From there they take them to the plantation to be fermented. The beans are fermented in large wooden boxes covered with banana leaves and burlap material for six days. 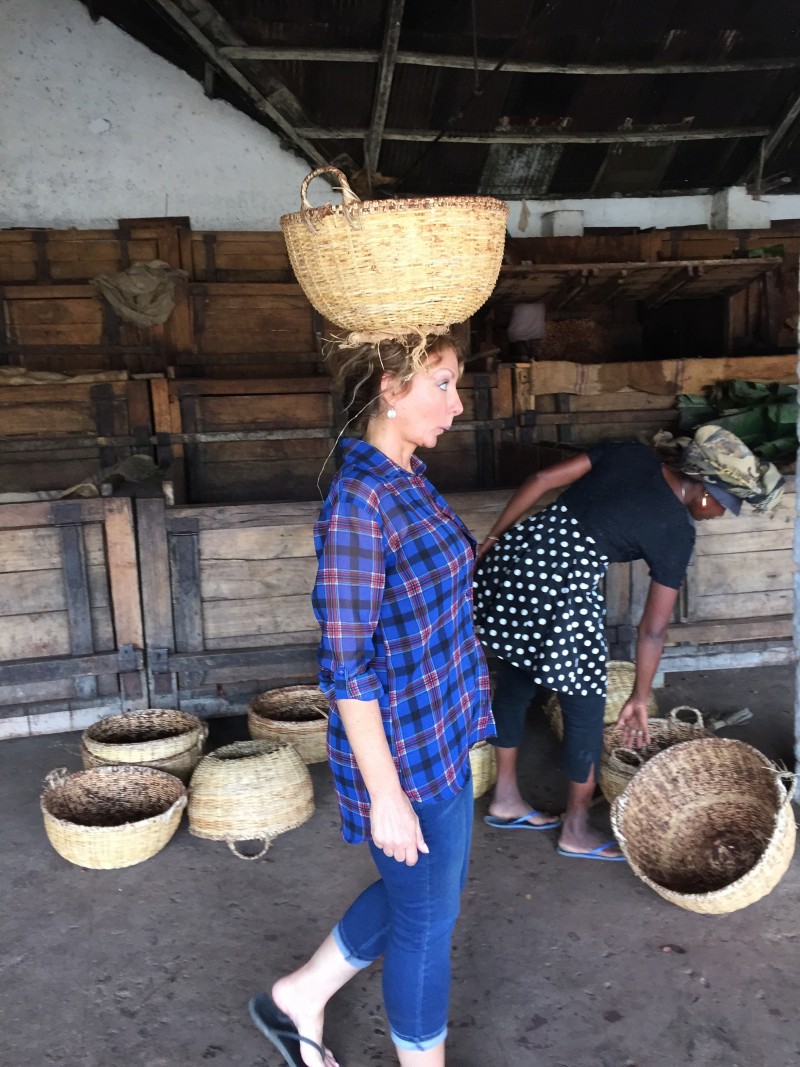 Again, they are rotated every several hours so they are evenly dried or the taste of the beans will be “off” or bitter/sour. The beans take about five to seven days to fully dry in the sun. Once the beans are dry they are ready to be shipped off to Europe or the U.S. to be roasted and processed into chocolate.

Now – think about all that work that goes into chocolate…this is before it is ever made into a chocolate bar or mixed with other ingredients, or poured over a strawberry.

Seriously, it’s a ton of work, and that’s one of the reasons quality chocolate is so expensive. 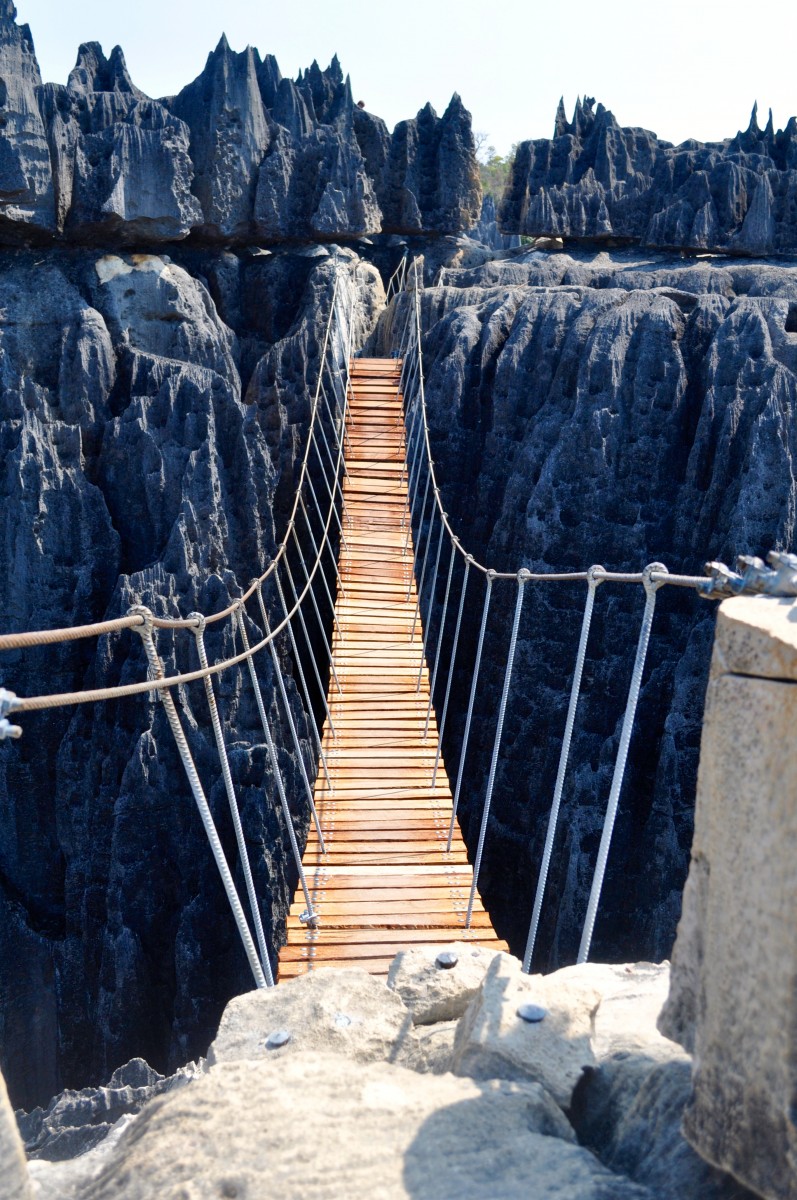 · Each cacao pod produces approximately 40 beans; it takes about 3.5 pods to produce one pound of chocolate. Think of a Hershey bar – it takes almost a full year for a cacao tree to produce enough pods to make ten standard sized Hershey bars.
· There are three types of cacao beans – Criollo (the rarest and finest of all beans), Forestero, and a hybrid between the two called Trinitario.
· Cacao pods vary in overall color from yellow, red, purple, orange, maroon to green which has nothing to do with how ripe it is. A yellow color forms in the creases of the pod when ready to harvest.
· Eating chocolate increases the levels of endorphins released into the brain, giving credence to the claim that chocolate is a comfort food. The endorphins work to lessen pain and decrease stress. Another common neurotransmitter affected by chocolate is serotonin. Serotonin is known as an anti-depressant. One of the chemicals which causes the release of serotonin is tryptophan found in chocolate.
· One of the more unique neurotransmitters released by chocolate is phenylethylamine. This so called “chocolate amphetamine” causes changes in blood pressure and blood-sugar levels leading to feelings of excitement and alertness. It works like amphetamines to increase mood and decrease depression, but it does not result in the same tolerance or addiction. Phenylethylamine is also called the “love drug” because it causes your pulse rate to quicken, resulting in a similar feeling to when someone is in love.
· Dark chocolate is rich in antioxidants (the darker the better). 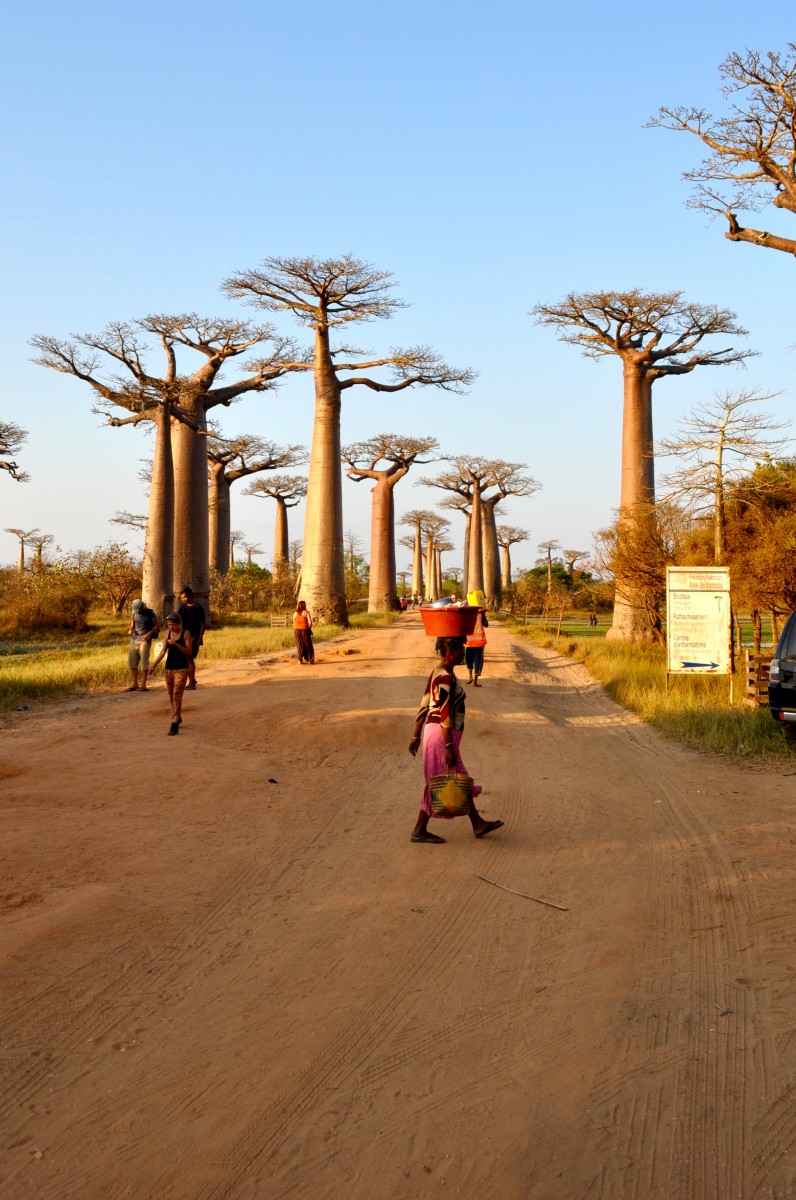 Will you be bringing any Malagasy cacao back to Winter Park for Peterbrooke?

We are exploring ways to bring our own cocoa into the country. The sheer distance and remoteness of the farms creates significant challenges for us to overcome, but we’ll see where this takes us.

Did you learn any new recipes or dishes for chocolates in Madagascar?

We were lucky enough to taste some Malagasy chocolate produced in Madagascar. The quality, as with most chocolate, varies quite a bit. We were impressed with the quality of the beans and enjoyed some fabulous chocolate cake made with local cocoa, made by the owner of one of the plantations we visited (she’s the one pictured laughing with us in many of our pics).

Sadly, many Malagasy farmers have never tasted the finished product from their efforts because it is still a luxury item that is too expensive for them to afford and most beans are exported to be processed in other countries. 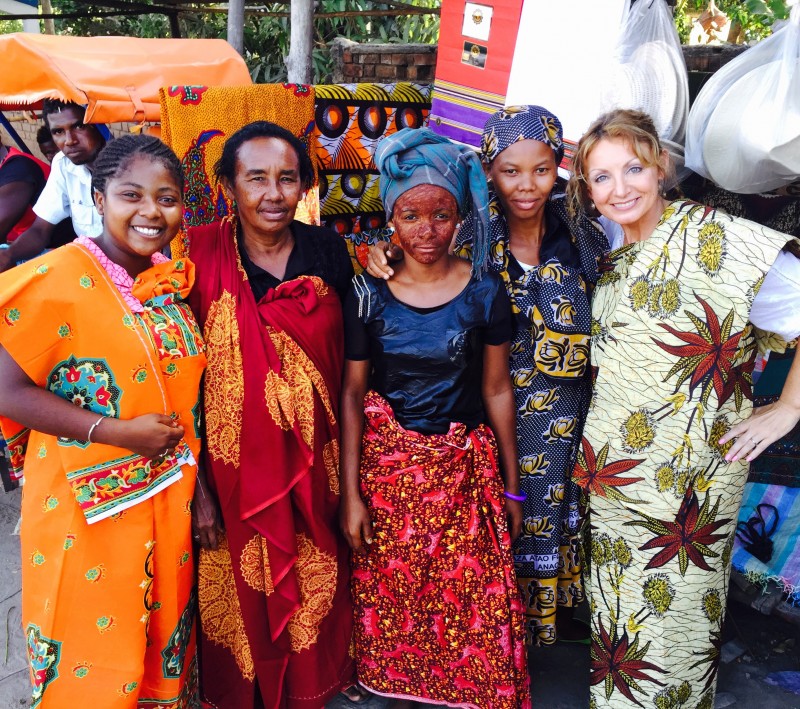 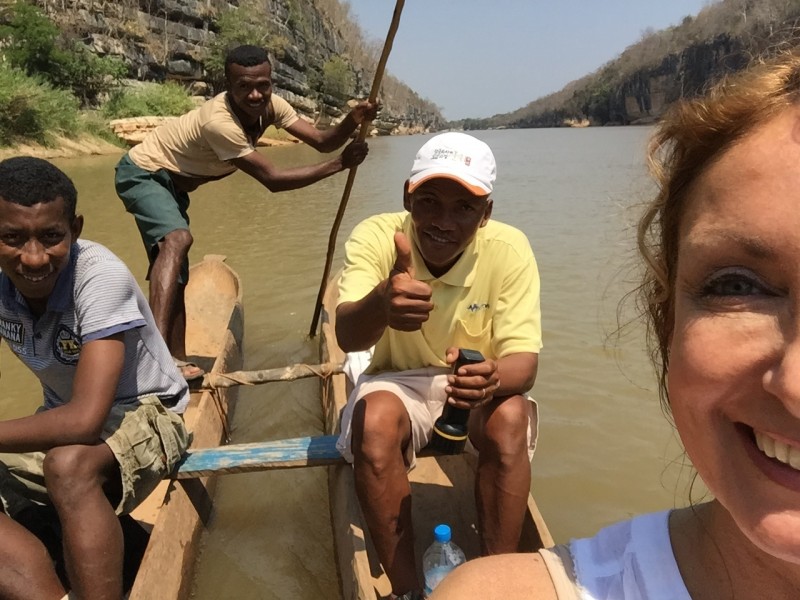 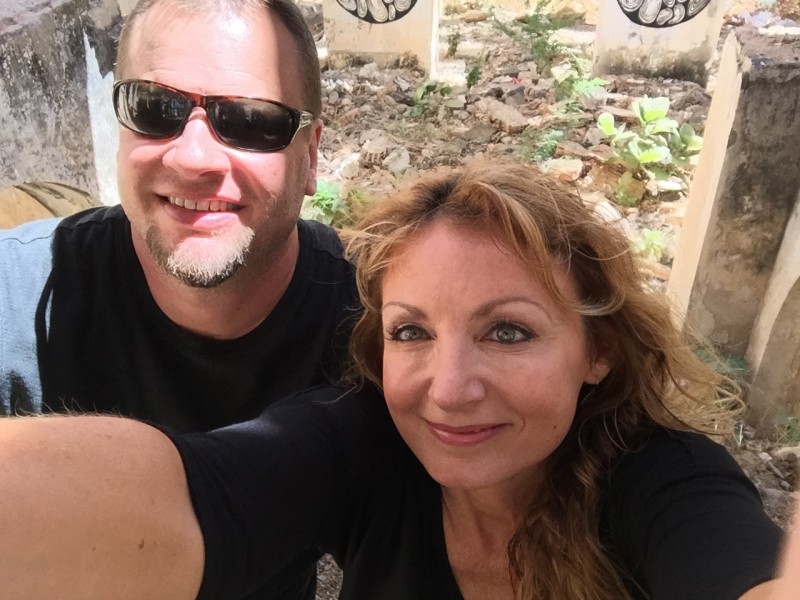 Kevin and Jami Wray of Peterbrooke Chocolatier of Winter Park – thank you for sharing your story with us!