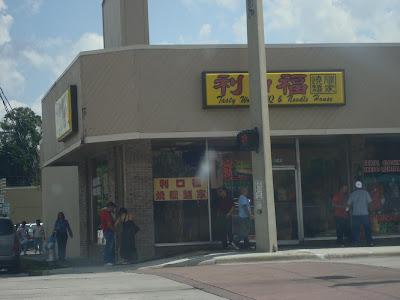 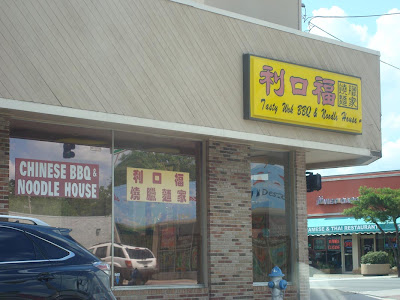 One of my most favorite places for Chinese food in Orlando is Tasty Wok. With reasonable prices and great heapings of authentic, home-cookin style, Chinese food, no wonder this place is almost always busy throughout the day, packed with Chinese families and friends having a good meal. Delicious though often greasy(I believe that’s one of their ancient secrets to the “tasty” in the “tasty wok”)

Tasty Wok refers to itself as a BBQ and Noodle house, both of which it does exceedingly well. The beef chow fun and the beef pan fried noodles are both exemplary noodle dishes, filled with luscious seared beef and heapings of stir fried noodles.

I visit Tasty Wok with a few of my brothers, Victor, also a Chinese food connoisseur, and Di. We had just awaken from a night out and called each other up for some lunch downtown in the Mills 50 district at the tantalizing Tasty Wok.

Victor orders the rice congee, a rice porridge like soup dish, mixed with a little bit of scallions, chicken, pork, and pieces of thousand year old egg. The “thousand year egg” isn’t really a thousand years old, but it is made by preserving chicken eggs in a mixture of clay, ash, salt, lime, and rice straw for several weeks to several months, depending on the method of processing. After the process is completed, the yolk becomes a dark green, cream-like substance with a strong odor of sulphur and ammonia, while the white becomes a dark brown, transparent jelly. 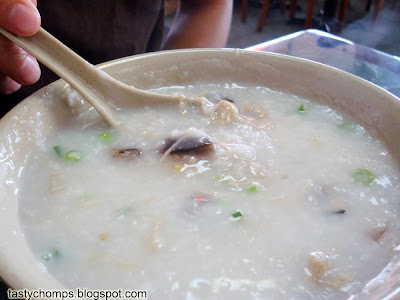 Congee is a traditional morning dish in Chinese families and is also served to those who are unwell to help them get better. After last night, I am sure Victor needed some of this.

He also ordered a side of “yau ja gwai” or Chinese fried doughnut bread stick that is often dipped and ate with the congee porridge. 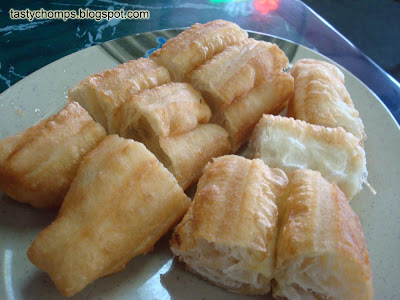 The Cantonese name yàuh ja gwái literally means “oil-fried ghost” and, according to folklore, is an act of protest against Song Dynasty official Qin Hui, who is said to have orchestrated the plot to frame the general Yue Fei, an icon of patriotism in Chinese culture. It is said that the food, originally in the shape of two human-shaped pieces of dough but later evolved into two pieces joined in the middle, represents Qin Hui and his wife, both having a hand in collaborating with the enemy to bring about the great general’s demise.

Thus the yàuh ja gwái is deep fried and eaten as if done to the traitorous couple. In keeping with the legend, yàuh ja gwái are often made as two foot-long rolls of dough joined along the middle, with one roll representing the husband and the other the wife.

Kind of cruel, I know, but tasty nonetheless. I guess it goes to show that its a bad idea to be traitorous…

Di orders the three meat rice combination plate, a great value and delicious offering from Tasty Wok. With this meal you can order any three barbeque meats on top of rice with a side of gai lan, or chinese brocolli. Di chooses cha siu, or roasted barbeque pork, soy sauce chicken, and roast duck. 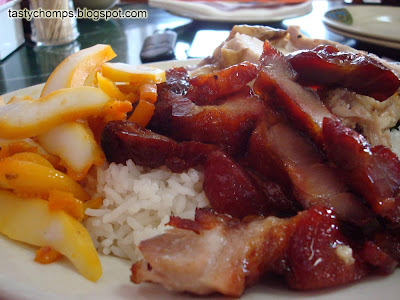 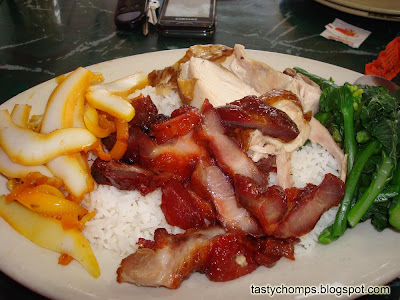