Longhorn Steakhouse, situated in our favorite mega outdoor mall/weekend babysitter for juveniles – Waterford Lakes Town Center – is stylized after the often-romanticized Wild West, adorned with photos, saddles, signs to the corral, the whole roundup of cowboy paraphenalia in a recreation of a dark wood-framed and dimly-lit Western saloon.

America has long had wet dreams about its ambitions to “Go Westward, young man” and beyond via the sometimes harsh expansionist doctrine of manifest destiny (basically that everything west of the Appalachians is ours, so scram Native Americans, Frenchies, Spaniards, Chinamen, et. al). Yearning for a time of gun slingers, and saloons, dust and tumbleweed when America was in its age of prepubescence, no longer a colony and not yet a global empire, only beginning to take its first steps into the unknown vis a vis the Oregon Trail (and its damned, perilous fording, river-crossing oxen).

The images of adventure, cowboys, and great steaks are forever intertwined in the American psyche. 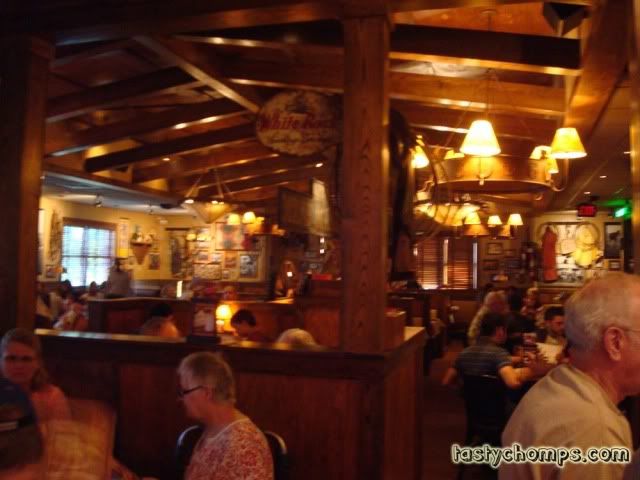 Yes, Longhorn is a chain but it is a locally owned chain? and the steaks here are pretty good comparably. This Longhorn Steakhouse, one of many owned by the Darden Restaurant group, has pretty good consistent service and the owner/manager often walks around to check up on you as you dine.

On this occasion, we are celebrating a family member’s birthday. (Shout out: If you need a birthday gift, I recommend the Unique Image stall at the Florida Mall where they do engravings and dogtags etc. for pretty cheap, email uniqueimage.fl@gmail.com).

Caeser Salad at Longhorn Steakhouse
The birthday girl orders the 7oz. Flo’s Filet and Lobster Tail. The filet was good but the lobster tail, as things are sometimes at chains, overseasoned and way too salty. You would hope for the price that you pay it would be perfect.

My cousin Helen orders the healthy Longhorn Salmon on a bed of seasoned rice.

For my entree, I opt to share a outlaw ribeye steak with my cousin Kevin. It is a considerably large and savory 18 oz. cut of USDA prime ribeye, seasoned and cooked to order medium rare. The steak is tender and moist, with a dab of melted butter on top, flavorful from the grill and seasonings and fattiness of the cut.

Overall, Longhorn Steakhouse is a pretty good, though sometimes inconsistent, better-than-Outback, steakhouse for dinner. Leaving Longhorn’s, this cowboy is content to ride out into the sunset, with a head towards the western skies and a satisfied tummy full with food.