According to Wikipedia.com, “hibachi-style” is often misused in the U.S. as a term for Japanese teppanyaki cooking, in which gas-heated hotplates are integrated into tables around which many people (often multiple parties) can sit and eat at once. The chef performs the cooking in front of the diners, typically with theatrical flair and tricks.

As the restaurants became popular at tourist spots with non-Japanese, the chain increased the performance aspect of the chef’s preparation. Benihana was the first to bring this style to the US in 1964

Kobe Steakhouse is the most prominent teppanyaki grill style restaurant chain in Central Florida with locations from International Drive to Altamonte Springs (Thanks Watch Me eAT!). This was my first visit to Kobe’s (for a friend’s graduation party) and I was actually pleasantly surprised by my experience.

Upon reaching Kobe’s, you are immediately awestruck by the majesty of the towering blue temple like building that houses Kobe. Outside, a line already is forming to go inside (they usually won’t seat you until a majority of your party is there). Inside, the place is teeming with people and the loud clangs of spatulas and knives flipping in the air from the master “chefs”.

Over 20 teppanyaki grill tables inhabit Kobe Steakhouse, the most awesome amount of grill tables I have ever seen. After our table is seated, a chef strolls along in with a push cart full of ingredients for the meal. Meals are around $25 a person and definitely not cheap, especially if you go for lobster or filet mignon rather than regular sirloin, chicken, shrimp, or scallops. Part show, part food party, playing with your food is something these guys do with charm and wit. Our chef was pretty funny, cracking jokes and eggs just as easily. My favorite part is when they construct a volcano of onion, dousing it in vegetable oil, and exploding it in volcanic fire spewing out puffs of white smoke.

Overall I thoroughly enjoyed my meal, although it is a bit pricey for what it is, it was definitely an entertaining night for everyone at the table. 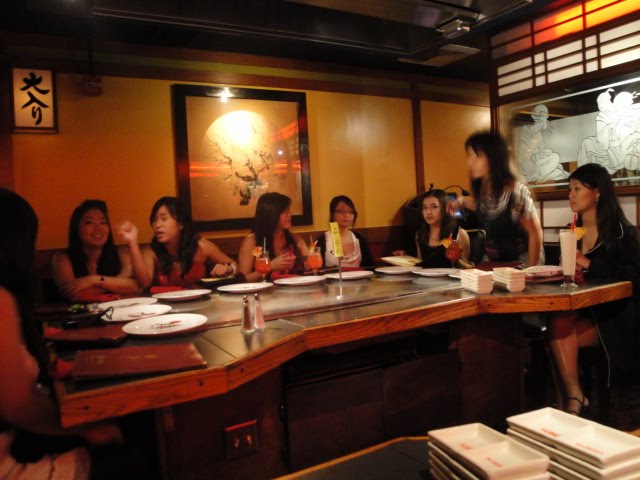 After the cooking was finished, I felt it seemed that they rushed us out a bit though. I also wanted to note alot of my friends suggested double white sauce and skipping the ginger sauce. I thought this helps but sometimes the flavor should stand on its own without extra sauce, just sayin’.