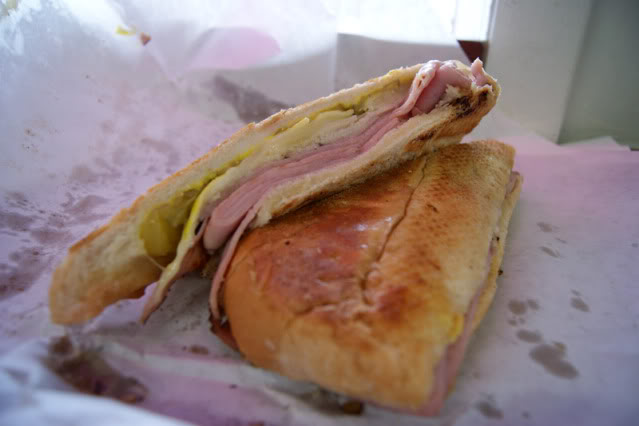 The quirky, teeny tiny Black Bean Deli is a staple of the Winter Park area, sitting in a small strip mall in an even smaller shack just north of Fairbanks Avenue on Orlando Ave (US 17/92). They have won numerous accolades throughout the years from Best Cuban in the Orlando Weekly to Best Takeout in the Orlando Sentinel Foodies just this past year.

The place, as said earlier, is tiny. You would probably be best advised to try to get their goods for take out as they have very few seatings by the window / along the walls. Their menu is similarly tiny, though I think it suits them  as this allows for greater focus to do a few things exceptionally well rather than go crazy on a whole crazy list of dishes.

Black Bean Deli is renown for their cuban sandwiches, and rightly so. I ordered  a small cuban ($5) and it was delicioso: plentiful, juicy slices of sweet ham, roast pork, swiss cheese and pickles all pressed in between a wonderful cuban bread. The bread is what makes these sandwiches stand out I believe as they are fresh, soft, and you can tell they were made with careful attention. Excellente. I could only eat half of it cause it was such a large sandwich. No problems because I saved the rest for lunch the next day.

My partner ordered the pan con lechon ($5), a sandwich chockful of pulled roast pork with garlic mojo. It was good but maybe needed a little seasoning and a little lighter touch of the garlic mojo.

The beef empanadas ($1.75) were  tasty meat pies filled with bits of seasoned ground beef, kind of like a latino hot pocket with ground beef instead of cheese and pepperoni. We also had the tres leches, ($2.25) a small wonderful pound cake topped with three types of milk ( condensed milk, whipped cream, and milk).

Next time I will try their medianoche sandwich too…

ps…I have also heard rumors also that Black Bean Deli may try their hand at the food truck phenomenon as well, so we shall see if these rumors prove to be true in the coming days!

A Food Lover’s Guide to the SRQ (Sarasota) – Our Perfect...