Under the hot Florida sun, the trucks were lined up into two rows one on each side of the big park and stage near downtown Avalon Park by the Publix. I was at the event selling food truck apparel with my long time friend Michael Cho, co-owner of Impress Ink Tees screen printing and apparel shop (located on Goldenrod road near Colonial Dr). It was our first time selling shirts and I think it was pretty successful. The food truck shirts had designs ranging from “Truck Eat Sleep” to “Stay Hungry with a food truck made of foods” and a I heart (food truck) food truck”. We had quite a few sales and I also had a great time meeting a few readers of this very blog. It was so fun meeting and talking to people who have read my posts over the years and followed me on twitter and facebook. I was pleasantly surprised that some people were even at the Avalon Park Food Truck Bazaar because they heard it from my twitter account! The next time we will be out with the food truck shirts to be sold in person is at the Oviedo Mall Food Truck Bazaar on Sunday August 24th, so if you have a chance come by and say hello!

Overall, it was a great event and many of the vendors sold out of food. C&S; Brisket Bus for one sold out of over 350 lbs of meat alone in 4 hours. The good folks over at The Crooked Spoon said that this was their busiest night EVER! I am sure these bazaars will continue to be a success and hope that the food truck scene will keep on truckin! Ride on!

Thank you to everyone who bought a food truck shirt! You can buy them at the Oviedo Mall bazaar on Sunday August 14th!

3D Lasik table – Best Street team ever with amazing Lemonade from Publix . A True LIFESAVER in the Florida Heat

The Crepe Company – They rock!!

Monica and Theresa modelling the chimoo and deep fried PBJ from Treehouse truck!

Jerk Pit Master Mark Robinson at the helm! God Bless this man and his food! 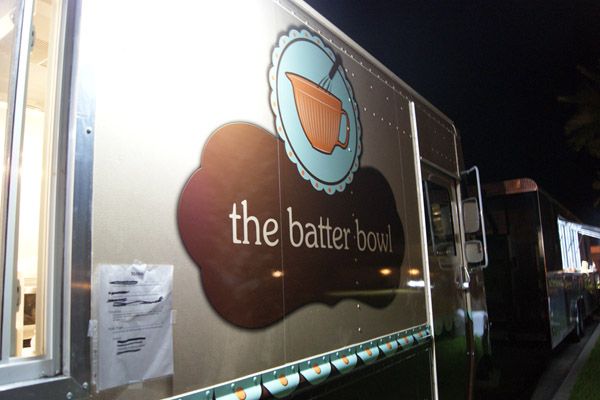 The tiramisu was soft and sweet, almost like a creme brulee but with that familiar taste of chocolate, coffee, and lady fingers.
See you at the next event: The Oviedo Mall  Food truck Bazaar on Sunday August 14th.
If you can’t wait till then, make sure you follow all the trucks on twitter to find out where they are at! There are usually meet up during the week after work! For more info, visit: http://tastychomps.blogspot.com/p/orlando-food-truck-guide.html

$1 Filet Sandwiches at Morton’s The Steakhouse this Thursday for National...