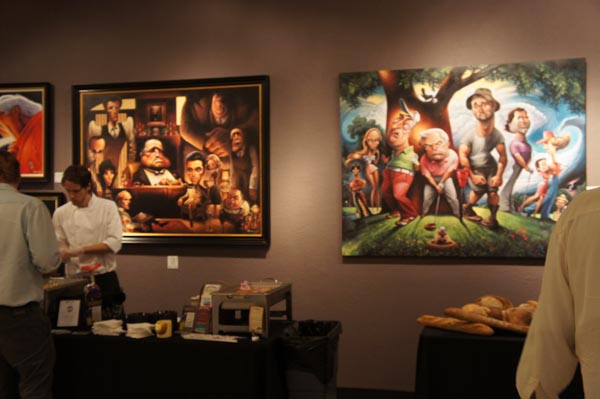 Slow Down Orlando with Edible Orlando magazine and the Winter Park Harvest Festival hosted “Slow Down at CityArts” a fundraising event to benefit the Downtown Arts District and Slow Down Orlando on Friday March 3rd. The event was hosted at the CityArts Factory featuring local arts and local chefs and an admission price of $15.

At the event, patrons sampled craft beers and cocktails from Florida distillers such as the Winter Park Distilling Company, Flagler Spirits, Palm Ridge Reserve Whiskey, and Widmer Brothers Brewing. I had no idea we had so many local distillers in or around our area, it gives me hope that one day Orlando will have its own Orlando Beer Week similar to the one Tampa Bay is holding this week for its inaugural Tampa Bay Beer Week (covered here in Jeff Houck of The Tampa Tribune). The craft beer culture has definitely grown in Orlando, especially with the increase in tap rooms and bars featuring more than your regular American budweiser and miller light. I think the time is ripe. What say you, Orlando beer lovers? Can we set this thing up already? Let’s hop on it.

To go along with the sampling of drinks was a sampling of seasonal tastings of local food, all created in the mindset of the Slow Food movement, made with food that is good, clean and fair.

Dandelion Community Cafe presented Stuffed Cucumber Medallions made with marinated portobello mushroom from Zellwood Farm of Apopka, Heirloom Tomato from Organic Country Farm of S. Cloud, and carrots, red onions, scallions, and lemon zest. The ingredients were all organic, vegan, soy-free, and gluten free. The cucumber medallions were all very fresh, light, and surprisingly spicy. It gave me a nice kick in the tastebuds.

The Rusty Spoon served deviled “Green Eggs and Ham“, very delicious and fun to eat. I always wanted to try a rendition of green eggs and ham of Dr. Seuss fame.

The dish that blew me away the most at the event were Spanish River Grill’s Stuffed Collard Greens & Dirty Grits made with pulled Kurabota Pork, local Shrimp, Green Plaintain, Tomazin Farms Collard Greens, Anson Mills Grits. Chef Salgado made the grits dirty style, a play on the flavors of dirty rice but stylized for Florida and its love of corn grits. It was very hearty and rich, and the flavors of the collard greens and kurabota pork and shrimp went together so beautifully. I regretted not getting a second plate all night. Time to make a trip out to New Smyrna Beach to try Spanish River Grill!

If you are downtown, make sure to check out CityArts Factory, Downtown Orlando’s largest collective of art galleries which showcases an infusion of local and international works of art, rotated on a monthly basis. Free admission Tuesday through Saturday from 11 a.m. to 6 p.m.

Pink Night Out with E! TV’s Giuliana Rancic at The Ballroom...