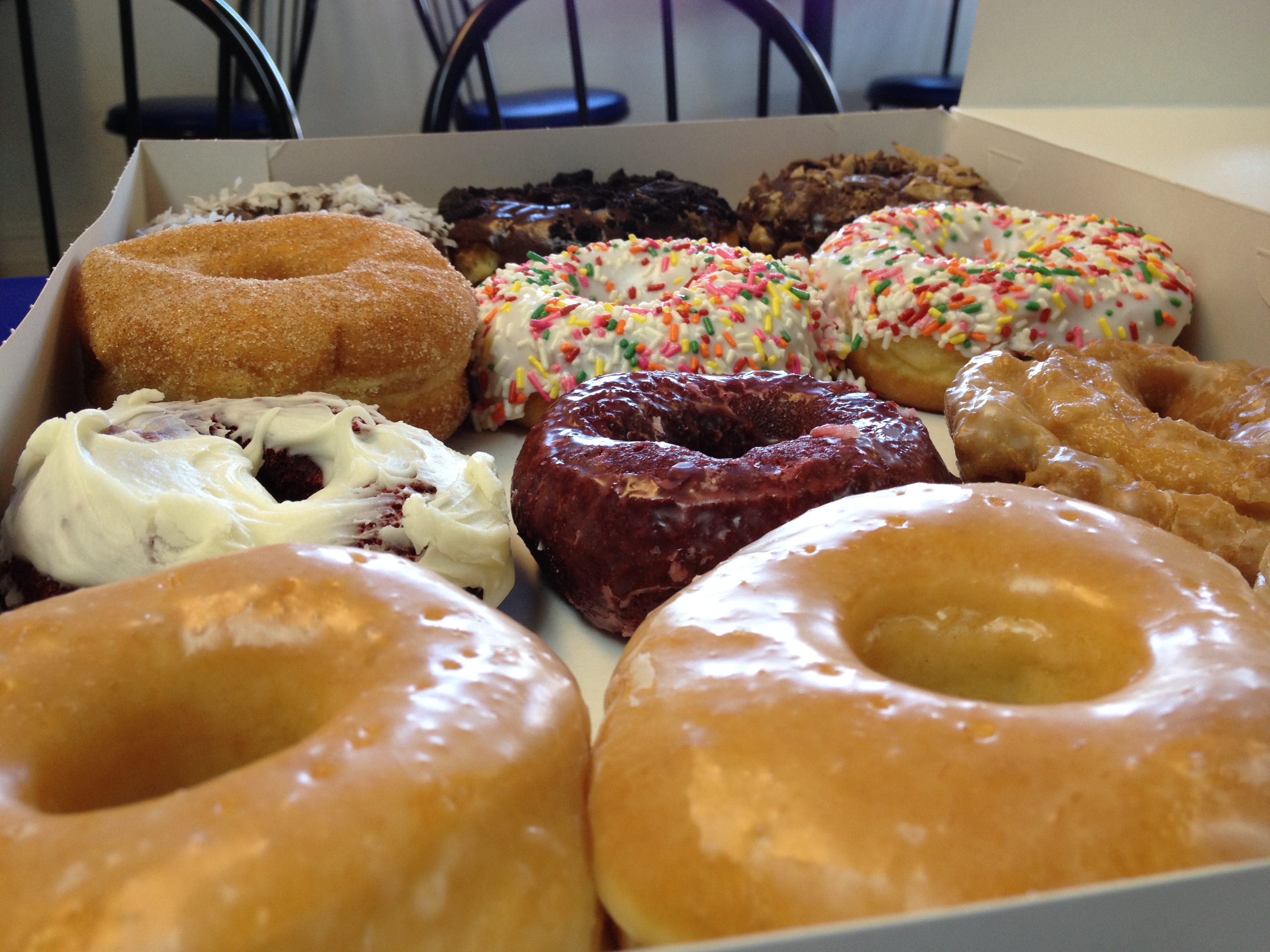 Open 24 hours a day 7 days a week, Donut King is a treat for those who love hand made, fresh daily donuts. Located out in Minneola, north of SR 50 and way out west of Orlando, this unassuming little bake shop packs a big punch in terms of sweet flavors. Strangely enough, there are several menus featured here at Donut King: the donuts menu, a breakfast menu, a burger menu, and a New Orleans style cajun menu (including an impressive list of po boy sandwiches).

When you first step into Donut King, it feels like it used to be a old 50’s fast food joint, despite being open only since 2007. A few scattered chairs and tables, and a bar area on a side are all the seating available. Most patrons come in, salivating over the display of donuts on donuts on donuts, ordering their boxes and go.

Donuts ($0.79 each or $7.79 for a dozen) reign supreme here at donut king, soft, fluffy, and delicious. The glazed donut is heavenly, a sweet donut soft and fluffy like something you’d find on cloud 9 with a touch of vanilla flavor. The red velvet chocolate cake donut and the sour dough cake donut are also great, though they tasted more like cakes in donut form than a traditional donut. The sour dough cake donut reminded me particularly of a delightful apple fritter with out the apples. Custard filled donut holes, chocolate oreo crusted donuts, strawberry glazed donuts, and even a UF Gator themed sprinkled, chocolate glazed donut are some of the many flavors available.

As mentioned earlier, there is a burger menu, consisting of their signature “castle burgers“, which are much like the White Castle/Krystal’s slider variety. The bun was soft and the burger itself was agreeable, though nothing out of the ordinary. I wished there was more toppings in the burger, like more onions and pickles.

The New Orleans style cajun menu here was surprisingly good. The catfish had a spicy, flavorful batter and was fried to a golden crisp. The accompanying grits were standard fare. A whopping platter of gumbo with okra, sausage, cajun spices, and sauce over rice and french bread had a home-cooked, yet very mild taste to it, though I would have expected it to be more soup-like as I am accustomed to. One of my favorite things on the menu here were the chicken wings, fresh, crispy little wings dipped in a mild hot sauce. Simple but good.

Just the sheer amount of variety here will have you liking something on the menu. The donuts indeed were the main attraction

Scenes from The Donut King

Unassuming storefront belies what lay inside

Glazed Donuts on a stick – i call it the HoneyCatTails