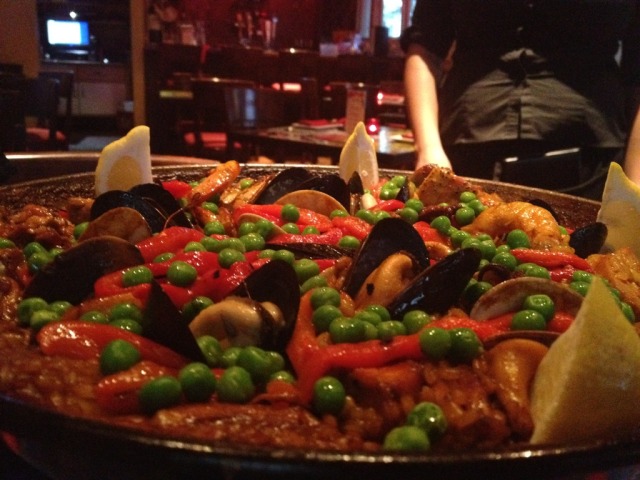 The tomatoes here are sprinkled throughout the menu of paellas and tapas, starting with the tomato dipping sauce with the house complimentary bread. The décor at mi Tomatina is inspired by the Spanish artist Joan Miró, recognizable for the use of bold reds, blues, yellows, and simple shapes, with a set of paintings on the wall and colorful mosaic tiles on their tiny tables.

If you go for their paella, make sure to be ready for a wait – it takes 20-30 minutes to make these dishes. It’s worth the wait though, especially to achieve that cherished, fragrant, dark brown caramelized crust on the bottom layer of rice, called “socarrat” by the Spanish. Try their paella fabulosa, paella rice cooked with squid, octopus, mussels, clams, shrimp, and chicken, but make sure to go with a group to share the feast as it comfortably feeds 2 or more. It is a rather expensive for what it is, and I think patrons would order it more if the price was lowered to ease that pinch in the wallet.

While you’re waiting for the paella though, mi Tomatina also features a substantive menu of both hot and cold tapas dishes to go with your red or white sangria made from Spanish wines. The white sangria is made with a albarino white wine, full of fresh aromas of peach, melon, apricot and citrus with floral notes, very enjoyable.

mi Tomatina is led by talented Chef José Baranenko, who has since last November taken the reins over the kitchen when previous long time Chef Nadia Yotti Ruiz left to Alabama with her family. Chef Jose had previously been sous chef under Chef Nadia and has kept many of the recipes the same but with a few touches and additions, especially in the areas of desserts – but more on that later.

Service here is wonderful and attentive, and one of the owners during my visit came by personally to say hello to my table and also other tables that evening. It was a cool summer evening and quite a few people had chosen to sit outside to enjoy the nice weather with their girlfriends and family.

Start off with the plato chico, served with manchego cheese, Serrano ham imported from Spain, morcilla, and cuts of lomo tenderloin served over olive oil. The papas bravas at mi Tomatina are a gourmet version of the more familiar homefries – roasted chunks of potatoes tossed in imported truffle oil, fresh parsley, and shaved Manchego cheese and served with a housemade tomato and pepper red dipping sauce. Although I am more accustomed to the creamy version of these tapas, the red pepper and tomato sauce brought a nice kick to the potato dish.

I also sampled some of the hearty tortilla con chorizo, a traditional Spanish egg, potato, and onion dish topped with chorizo sausage and accompanied by chive aioli and the always delicious but rather American classic, macaroni and cheese with a Spanish spin made with orecchiette pasta and manchego cheese, oven baked for a gratin finish.

Probably my most favorite item on the menu is the pato con peras, succulent pan roasted duck layered with slices of white wine poached pear and topped with a drizzle of sweet pear glaze – perfection! The way the pear and duck compliment each other and melt in your mouth is divine.

mi Tomatina’s winning dish from Taste of Winter Park this year, the Spanish sherry wine slow braised oxtail, accompanied by a delicate potato mousse and Pedro Ximenez Sherry wine reduction was sweet and savory but a little bit saltier than I remembered. The potato mousse and the oxtail went wonderfully together though.

By the time the paella is ready, served table-side, you’ll probably be ready for dessert if you overdid it with the tapas like I tend to do, and probably have to take the paella to go. Chef José Baranenko, a graduate of Le Cordon Bleu here in Orlando, features a delectable dessert menu with twists on traditional dishes like the sweet in house Tarta Santiago, a crispy puff pastry with Marcona almond filling, served with almond amaretto cream reduction and an almond Florentine cookie. A wonderful, sweet ending where for one lovely evening, you are transported over the seas to a tiny cafe in Spain, mi Tomatina.