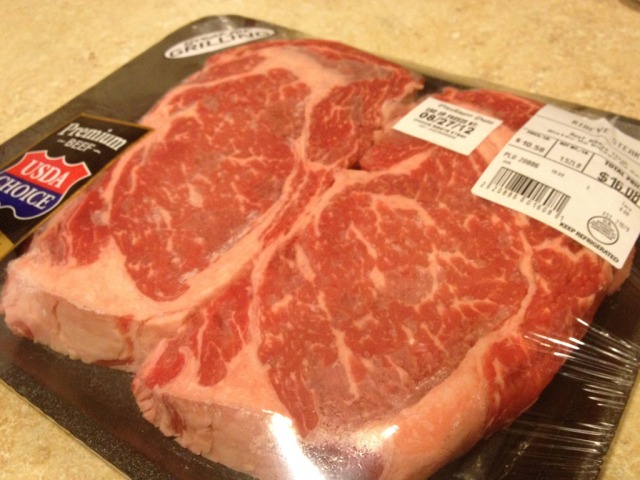 Recently, I’ve been watching Gordon Ramsey’s MasterChef on Fox and during the commercials and even during the show itself, there were several ads and product placements for Walmart’s new USDA Choice steaks. I was very skeptical at first, Walmart is not known for quality, mostly it’s known for cheap stuff.

The Walmart commercials showed that they replaced some of the steak at a few well known steak restaurants and “punked” some diners into thinking it was the real deal, and they said it tasted great. During the show, there were several “steak” competitions that contestants had to go through, from cooking for real cowboys to cooking steak perfectly three ways, rare, medium rare, and medium well. I guess I am a sucker for the barrage of ads because I went out and got some from the local Walmart.

Walmart is so confident that customers will love the top quality USDA Choice steaks that the retailer offers a 100% Money Back Satisfaction Guarantee. If customers aren’t fully satisfied, they can just bring back the receipt for a complete refund.

I took some steak home ($16.08 for two ribeyes), seasoned it with some Montreal steak seasoning, threw it on the grill and within about 10 minutes (flipping once half way through), I had a perfectly cooked medium rare ribeye steak ready to be eaten.

I took a cut. The meat was firm but not too tough, likely aided by the marbling of the ribeye. I placed a bite into my mouth and thought…not bad…actually pretty good. The steak was much better than what I was dreading, and was quite flavorful, no doubt because of the high fat content of a ribeye cut. But I thought they did a pretty good job at selecting their product this time. I think it may be better than the ribeye I usually pick up from Publix, a bit more flavorful and juicy. I would probably get it again if I didn’t hate Walmart so much.

Hot Krust Panini Kitchen Wins a Place in My Heart