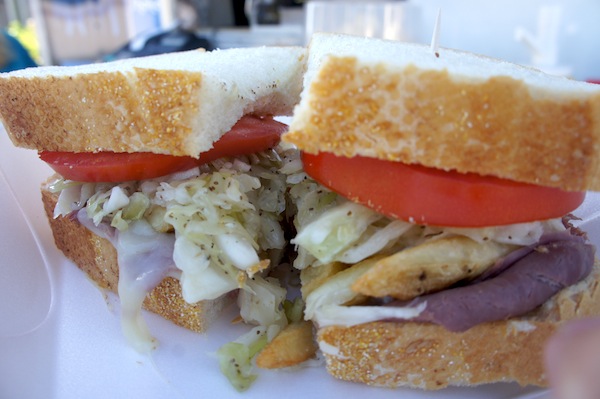 Niffty Fiffty’s Diner is one of the new food trucks in town that focuses on nostalgic, home made cooking. I recently had a chance to visit them at the Crealde School of Art in Winter Park for a community fundraiser.

They cure and smoke their own bacon, and also brine their corned beef, and pastrami in house, an impressive feat for any dining establishment these days. They also smoke their own marinated chicken breasts, BBQ pulled pork, BBQ pulled chicken, beef jerky, and beef brisket.

The menu ranges from burgers and sandwiches to their very scrumptious, meticulously handmade desserts like cookies, brownies, and cheesecakes. The powdered milk yeast buns that they use for their burger buns are even made in house from scratch. You may remember the strawberry souffled cheesecake that was available elsewhere before can now be found here at Nffty Fiffty’s Diner, and is indeed still a great treat.

You can find Niffty Fiffty’s Diner on Thursday, January 10th from 5 MM to 9PM at the Edgewood Farmers Market (at City Hall in Edgewood). They are also open from 10AM to 2PM every Friday at Food Truck Fridays at the RDV Sportsplex in Maitland. Check their facebook at https://www.facebook.com/NifftyFifftysDiner for up to date news on locations.

You can preview their menu (subject to change), below: