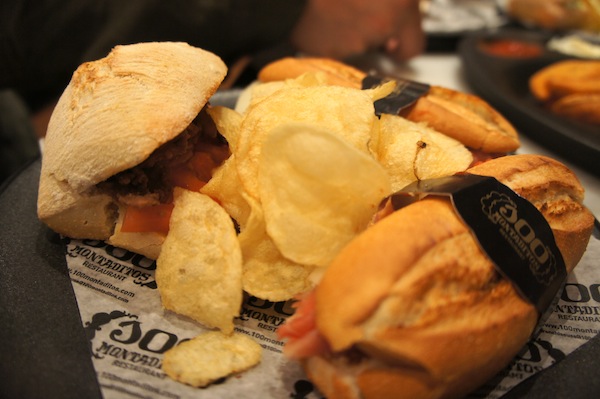 In a rare case of an international “fast food” franchise branching out to the US (rather than vice versa), 100 Montaditos, based out of Spain, has arrived to bring their Spanish style tapas sandwiches (known as montaditos) to Central Florida.

The beer of choice is the imported Spanish Mahou beer (which reminds me a little of light Stella Artois), and other drinks include sangria as well as red and white wines.

On Wednesdays, everything on the menu is $1 from sandwiches to apps and drinks. It’s a great value for the budget minded college crowd nearby at UCF, as well as the local high school students – and maybe that’s why there is such a huge line out the door there Wednesdays. Everyone loves a good deal – if you don’t mind the lines.

The sandwiches overall are quite nice, especially for a quick little bite before heading over to a movie at the nearby Waterford Regal. The ingredients are nice, but I think the bread could be better. It is a good value for the price though and worth a try if you are in the area.

Bites and Beers at Roque Pub