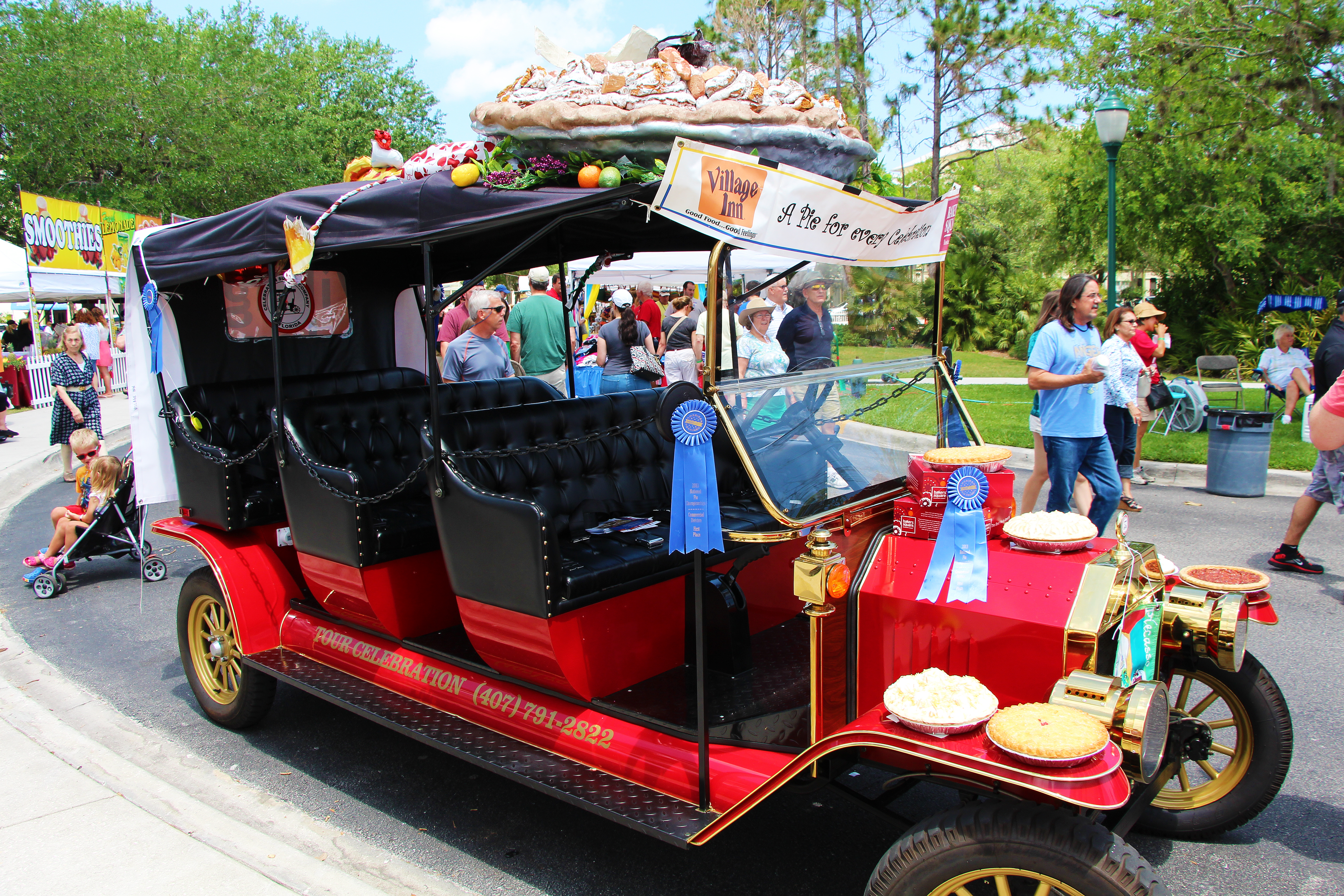 I was recently invited to attend The Great American Pie Festival, hosted at Lakeside Park in Celebration, Florida. After paralleling parking for the first time in my life, I took note of the extreme heat and multiple crowds gathered across Columbia, an upscale Columbian restaurant. In these crowds, I spotted volunteers wearing red shirts reading “PIE. A Slice of Life.” If that wasn’t epic enough, I was tempted to jump into the pie car with the giant pie on top! 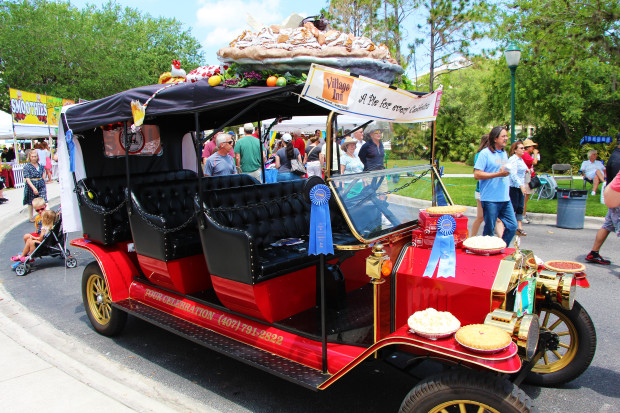 The Great American Pie car with a giant pie on the roof.

The festival took place outdoors and felt like a farmer’s market at first. From handmade aprons to glitzing jewelry, vendors of all kind came together to show off their unique products. After walking past all the vendors, I started to worry because there was no sign of pie. After all, I was attending a pie festival. There had to be pie. Once I managed to get past the vendors, I smelled food. Not Pie. I’m talking about real food. What smelt was the combination of melted mozzarella and sweet yellow corn from Gran Arepa. The combination was dynamic. 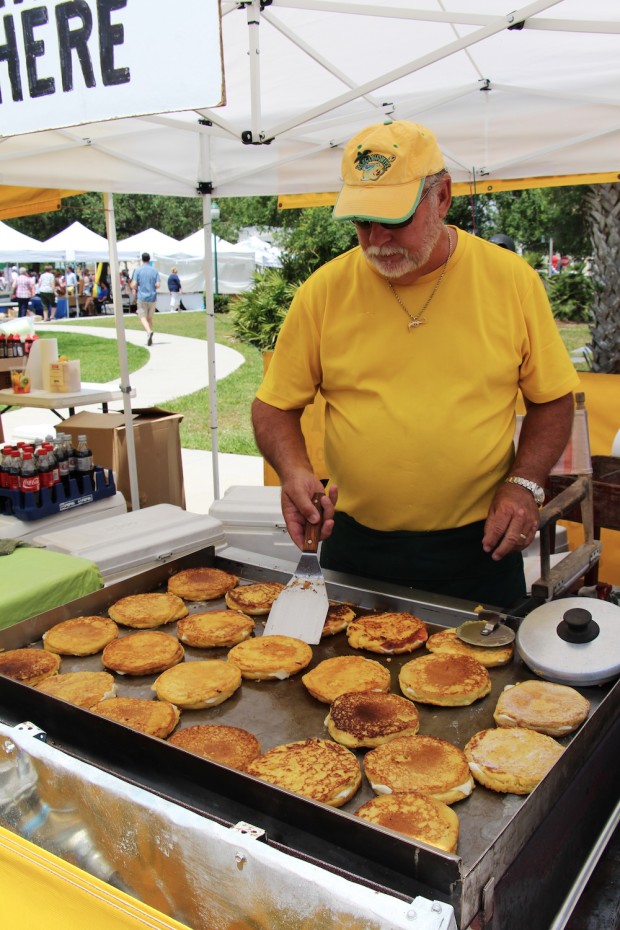 Melted Mozzarella and Sweet Yellow Corn from Arepa
Not even one minute after, a man walked by with a giant roll of something insane. I wasn’t sure what it was so I asked him and he pointed to Monsta Lobsta, a food truck specializing in lobster rolls. Oh, and they are monstrous! 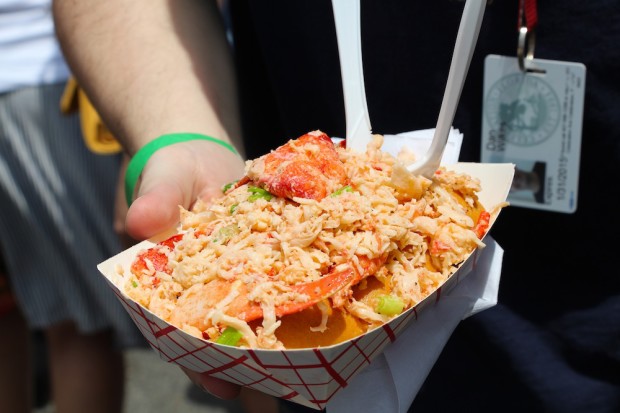 Making it through the food vendors was tough. I was tempted to stop at every vendor. Gyros. Fresh Smoothies. Everything. Before I could stop anywhere else, I made it my life mission to find the pie! Nothing would stop me, except for Super Pie Man, aka the Great American Pie Festival’s mascot who guided me to the Never-Ending-Pie Buffet! 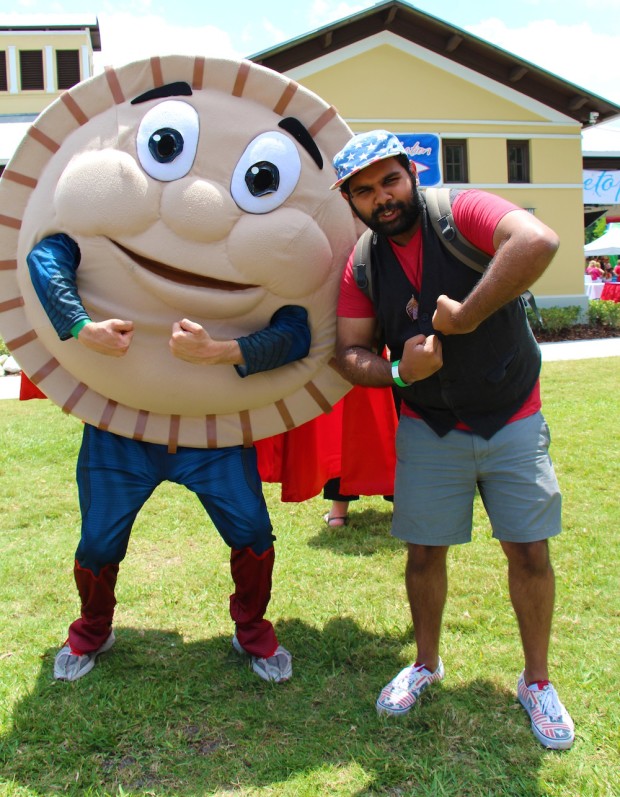 An hour had passed before I made it to the pie section of the festival. This was perhaps the most insane gathering of pie lovers I’ve seen in my life. Multiple tents were being raided for pie, and I’m talking all of it. People were walking away with two to three slices and I should have picked up on the Hunger Games desperation for pie. The pie entrance notified guests that they were prohibited to carry out any pie – as a normal buffet would. Instead, attendees hoarded boxes of pie and retreated to tables to feast. At first, I felt anxious because the lines were extremely  long. Actually, the lines kept breaking and reforming, so it was almost chaotic to get a single slice of yumminess. Fifteen minutes passed by and I finally managed to grab a slice of Caramel-Chocolate Silk Pie from Legendary. If chocolate mouse had a love child with pecan pie, this is what their child would look and taste like. The chocolate filling was sweet but not too overwhelming. My taste buds were zinging from the globs of oozing caramel, and the whole pie was brought to a beautiful finish with the crunch of toasted pecan. 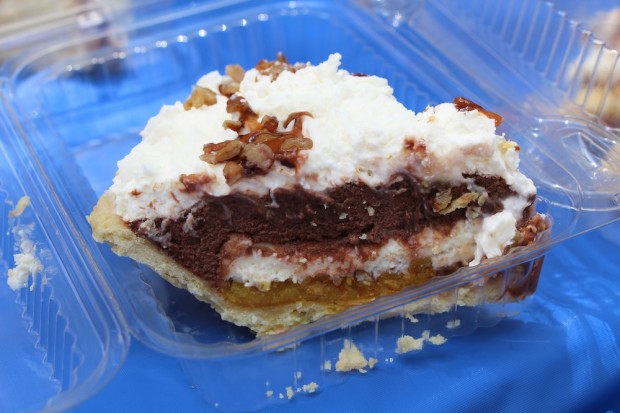 Out of the smaller pie companies, I spotted a trusted friend. Publix. They were manning down their pie stand by cranking out ten to twenty pie slices at a time. From blueberry to apple pie, they kept dishing it out. What made them even more epic was the complimentary vanilla bean ice-cream they were giving out. Yum! 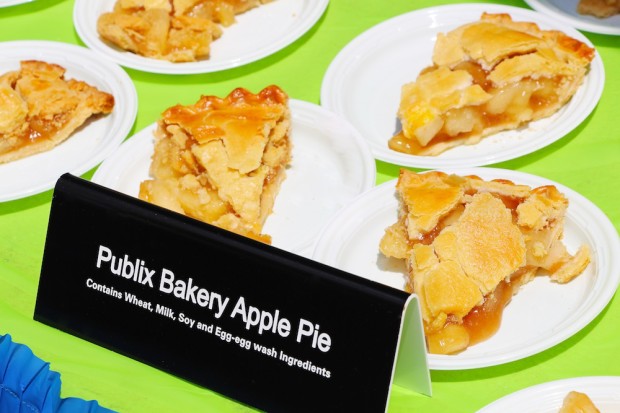 Apple Pie from Publix
By that point, I had at least 5 slices of pie. I should have stopped but I came across Wicks’ booth and sampled their Pecan Pie. Normally, Pecan Pie is too sweet and I’m not a fan of the overly buttery taste but Wicks was dishing out gold. Their Pecan Pie had a slightly firm consistency and wasn’t as sweet as sugar. Each bite was reminiscent of bourbon and roasted pecans. 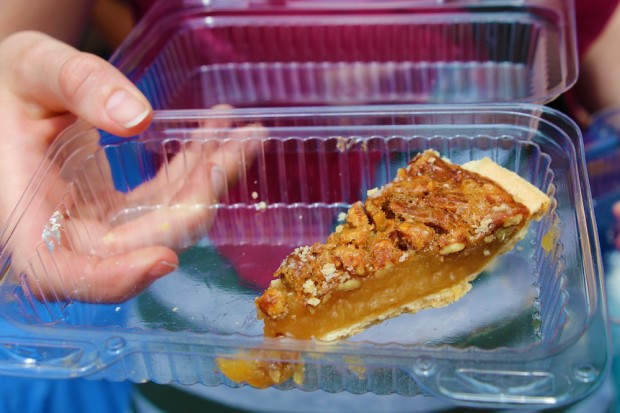 Once I finished off my third slice of pecan pie, I hobbled out of the pie arena. People were starting to go back for sevenths and I wasn’t ready to lose an arm for dessert. Now, I was ready to explore the festivities. When I say festivities, I’m referring to more pie eating activities. One specific event was a children’s pie eating content. The air was still. The adults were rubbing their kid’s shoulders and cheering them on. This was the real hunger games. 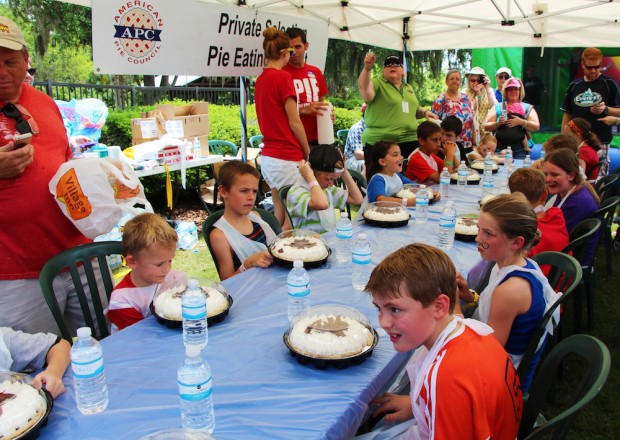 A table of youngseters getting ready to compete to find out who is the fastest pie eater.

Also, let’s not forget about the live entertainment. This guy was showing off some serious tricks and dance moves. 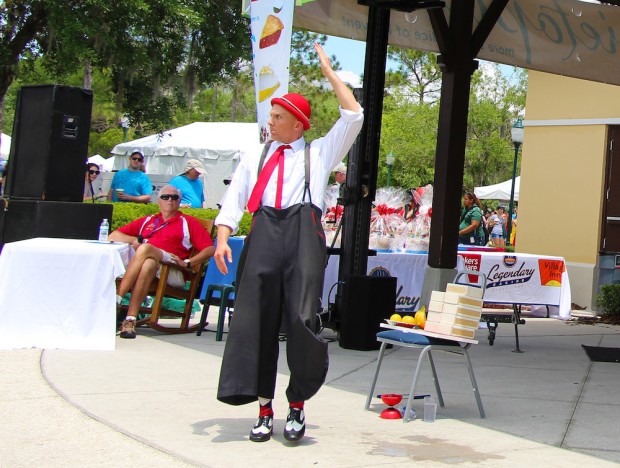 Live entertainment at The Pietopia

After another hour of devouring pie and watching children eat more pie than their parents would normally permit, I walked back to the pie buffet. By then, most of the pie was gone and families were eating despite being extremely full. After all, you can’t go to a pie festival and not go into a sugar coma after. One such group showed off their pie with pride. 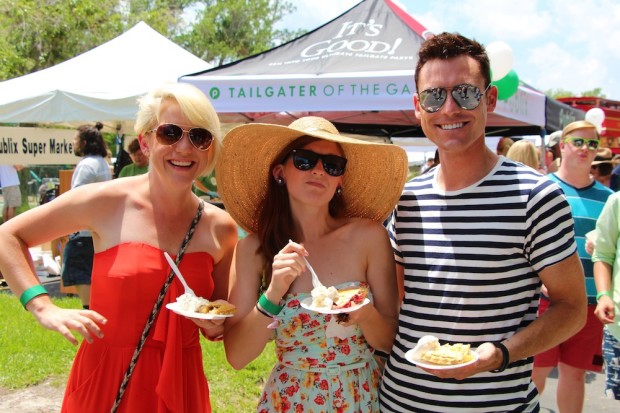 Overall, it was a wonderful family-oriented event. There were tons of activities aside from eating pie and the weather was great. My only SLICE of advice is to mentally prepare for the not so sweet parking situation.

What’s your favorite type of pie and why?

Comment below for a chance to win a $25 Publix Gift Card!