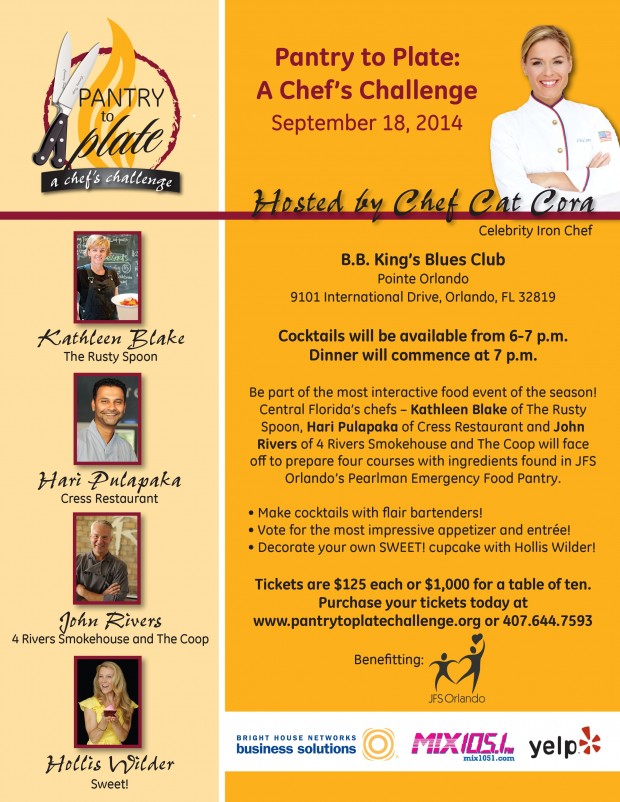 This will be a fun, interactive event where attendees are also part of the action with an interactive bar during cocktail hour, interactive centerpieces during dinner and a lively cupcake decorating challenge to finish off the night. Attendees will also be a part of the voting process for the winning chef!

Join Celebrity Chef Cat Cora and be part of the most interactive food event of the season!

Central Florida’s chefs –Kathleen Blake of The Rusty Spoon, Hari Pulapaka of Cress Restaurant and John Rivers of 4 Rivers Smokehouse and The COOP will face off to prepare four gourmet courses with ingredients found in JFS Orlando’s Pearlman Emergency Food Pantry. And of course Holly Wilder from Sweet! cupcake shop will be leading our cupcake challenge!

• Vote for the most impressive appetizer and entrée!

Emceed by Celebrity Chef Cat Cora, the participating chefs will be judged on taste, presentation, and creativity. Our panel of celebrity judges won’t determine all the winners, a second award will be presented to the chef who receives the most votes from YOU, the event attendees.

It’s all about giving back at this flavorful event. All proceeds from Pantry to Plate will go to support the mission of JFS Orlando and the many services offered to the community.

We have celebrity judges: Scott McKenzie from Mix 105.1, Heather McPhearson from the Orlando Sentinel and Mark Baratelli from the foodie blog TheDailyCity.com and creator of the Food Truck Bazaar!