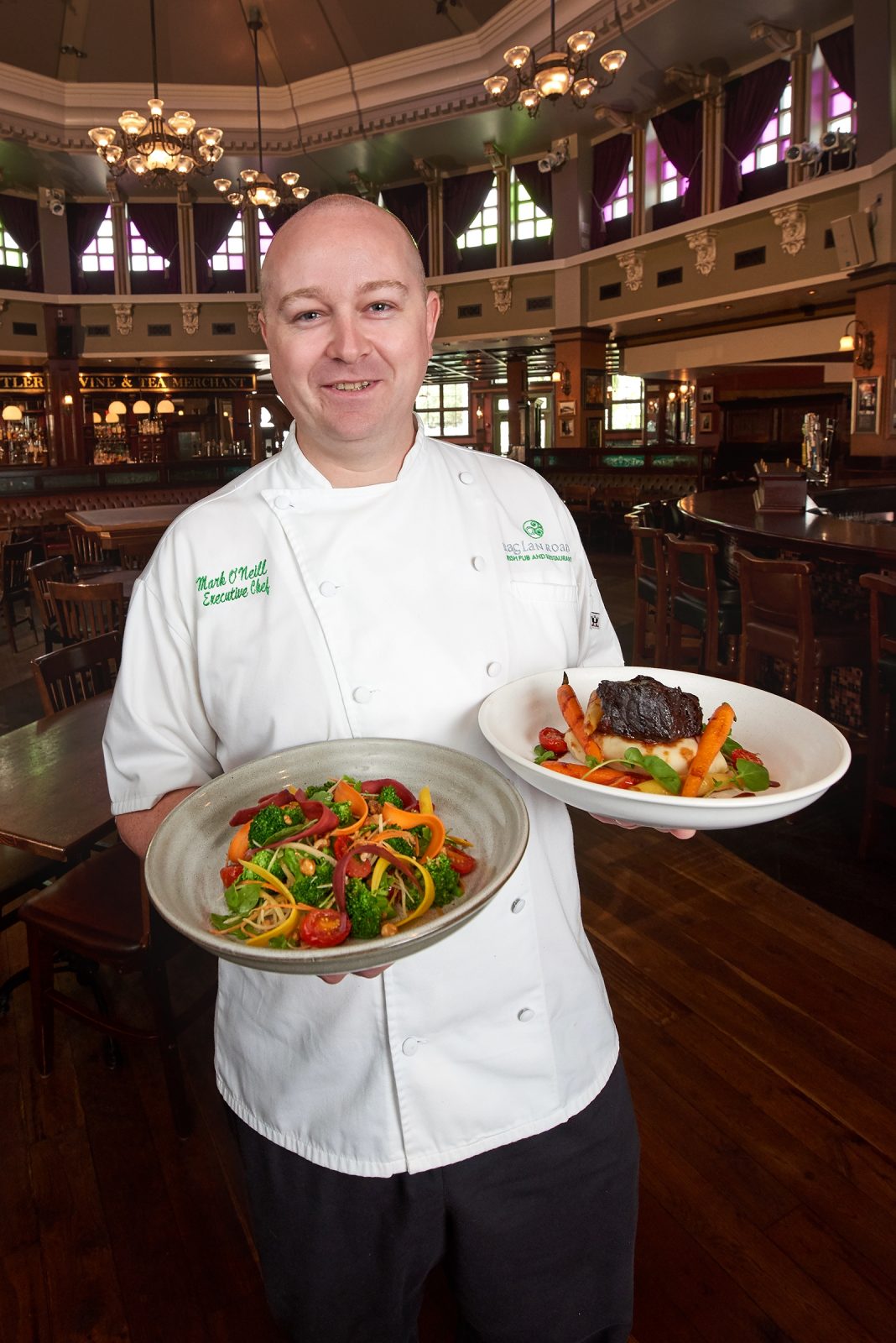 From the press release:

Mark O’Neill, a next-generation Irish culinary whiz with a passion for driving Irish cuisine to new levels, has been named executive chef at Raglan Road Irish Pub & Restaurant in Disney Springs. He trained and collaborated with top Irish and British Michelin Star chefs, and he honed his talents in some of the finest restaurants in London, Dublin, Germany and Australia.

O’Neill, 33, shares his vision for Raglan Road: “I’d like to do really great gastro-pub food, to have our team creating really nicely executed dishes like we have back home in Ireland. We’ll be developing fresh, made-from-scratch food that’s vibrant to the palate. It’s important that we stay in front of the modern Irish food trend and keep our guests excited about great new dishes on the menu.”

His culinary philosophy, developed over more than a decade of working in Michelin Star kitchens with some of the world’s top chefs, is to create visually pleasing, delicious dishes without over-complicating them. “Using really fresh ingredients – from produce and straight-from-the-boat fish to top-quality meats — and balancing textures on the plate guarantee a winning dish every time,” says O’Neill, who counts Thornton and celebrity chef Robin Gill among his major influences.

Pub owners John Cooke and Paul Nolan say they were impressed with O’Neill from the get-go.

“We’re thrilled to welcome Mark to Raglan Road,” Cooke says. “His instinctive talent and creativity combined with his remarkable culinary journey make for a very exciting future for our diners at Raglan Road.”

O’Neill loved the idea of cooking great food ever since he was a child whose family often dined out in upscale restaurants. His father, once a chef, cooked at home; his mother taught him basic cooking skills like chopping vegetables. At age 18, O’Neill dipped his toe into the business as commis (assistant) chef at Brasserie Sixty6 in Dublin and, soon after, he landed the same position at Four Season’s Hotel, Dublin. A year later, he began working under renowned Irish Chef Oliver Dunne at the Michelin-starred Bon Appetit in the coastal village of Malahide north of Dublin. “He advised me as a young commis chef to go work over in top kitchens in London.”

After taking a few years to travel and work in German and Australian kitchens, O’Neill followed Dunne’s advice.His first London gig was as chef de partie at the 3AA-Rosette Sauterelle under popular modern Irish chef Robin Gill, known for his new-wave approach in the kitchen and his popular London restaurants.

Another huge London opportunity arrived when O’Neill accepted a chef de partie position at the two-Michelin Star/5AA Rosette restaurant The Green House, Mayfair where he worked under Chef Antonin Bonnet, current owner of Quinsou on the Left Bank of Paris and known for his illustrious career in gastronomy.

In 2011, O’Neill took a big leap to 40/30, where he was senior sous chef to Executive Chef Arnaud Stevens, who had worked at Gordon Ramsay’s Restaurant Maze.

“I learned so much about kitchen management – it was intense,” O’Neill recalls.  “You are working 100 miles per hour, racing against the clock all the time, cooking at a very high skill level.  Everything has to be perfect.”

Despite the pace, O’Neill found his passion for menu development. “You are always learning and challenging yourself – the fun part of the job is creating something really good, and the guests are really enjoying it.”

In 2012, O’Neill landed as sous chef at the Michelin Star, 4AA-Rosette Thornton’s Restaurant Dublin where he refined his recipe development and menu skills with Ireland’s most renowned Michelin-Star chef, Kevin Thornton. Known for its dishes featuring game, Thornton’s gave O’Neill the opportunity to learn to butcher, age and tenderize meats including deer, goats, lamb and pigs.

Two key chef gigs followed that gave O’Neill the chance to oversee huge operations and staffs – first as head chef at Intel Ireland in Co. Kildare near Dublin, the biggest catering operation in the British Isles with a staff of 170 serving 5,000 a day. O’Neill stayed four years before accepting the executive chef position at Arthur Cox Law Dublin, one of Ireland’s most prestigious law firms catering for a staff of 700 and overseeing the culinary operation for fine dining lunches and dinners sourcing freshest ingredients from Irish artisan producers.

“I’m looking forward to working with this great Raglan Road team, keeping up the high standards in place and innovating and evolving the food culture back home in Ireland to Raglan Road.” 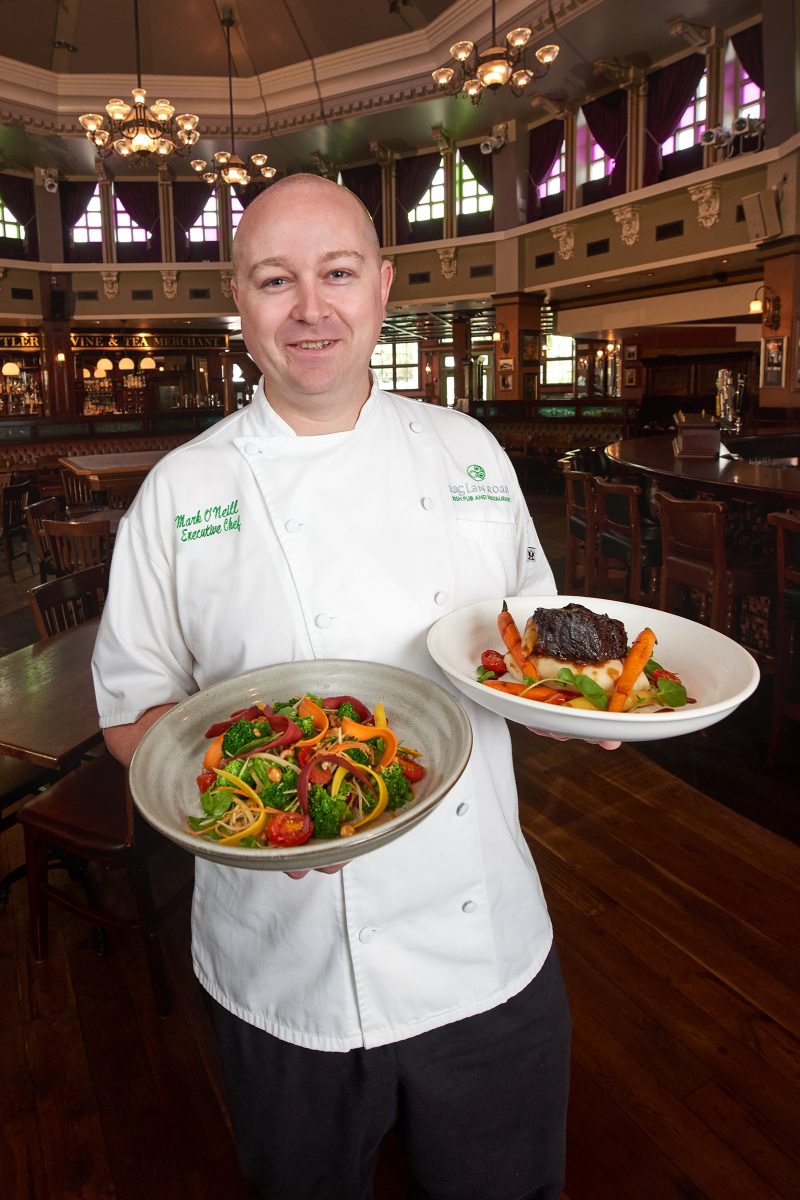 Q and A with Raglan Road Executive Chef Mark O’Neill for TastyChomps:

Tasty Chomps: What inspired you to become a chef?

Chef Mark O’Neill: I dined out with our family a lot when I was young and always loved great food. My father was once a chef and he cooked at home. Then I got involved in a culinary program when I was young.  I really loved it and thought it would be an amazing career to pursue.

What are some memorable moments from your career and upbringings that made an impact on your life in becoming a chef?

I had great opportunities to travel the world and cook and learn in countries like Australia, Germany and the UK, as well as at home in Ireland. And I was fortunate to work in several Michelin-Star kitchens with some top chefs like Robin Gill, Kevin Thornton, Antonin Bonnet and Oliver Dunne.

What were some of the biggest obstacles you had to overcome in your career?

It’s a fairly substantial personal sacrifice to work the long, hard hours required of a chef. But I do work hard to get in the quality time with my friends and family.

How is everything going at Raglan Road so far?

Very good! The Raglan Road team is amazing, and it’s a really good work atmosphere here at Raglan Road. We have a lot of fun, and we’re working on some terrific new dishes that will reflect the vibrant flavours of my Irish home.

What are some of your favorite ingredients to work with right now and why?

I love working with cuts of meat that may not commonly be featured on menus but that you can turn into really great dishes. And I enjoy balancing textures on the plate to create a dish that’s both visually pleasing and delicious.

What is the most memorable dish you have made so far?

I have many — one would be my 12-hour braised Pork Shoulder, Caramelized Apple Puree, Artichoke Textures, Pickled Mustard Seeds & Smoked Black Pudding Croquettes, with Sea Beets.

What are some of the most popular dishes at Raglan Road right now?

They would have to be our famous beer-battered Fish & Chips and our Shepherd’s Pie, featured on the menu as Keen Eye for the Shepherd’s Pie, with a contemporary twist. We’ve recently added our Irish Farmhouse Board of Loveliness and it’s been a popular starter to share – it features Guinness cheddar, Irish Whiskey cheddar, and Cashel bleu cheeses, our Irish egg, cured beef, soda bread, apricot chutney and pickled veggies.

What are some new dining trends in Ireland right now?

What makes a dish “Irish?”

You could take a classical Irish dish and modernize it.  We like to do a lot of twists on traditional Irish dishes.  Or creating dishes using produce grown or sourced from our island. We use the freshest-caught fish and shellfish from North Atlantic waters just as chefs in Ireland do.

What are your impressions of Orlando so far?

It’s a good life here! Of course, some spots are very busy with tourists, but over all, it’s a fun and friendly environment.  Once you get used to driving everywhere, LOL!

What are some of your favorite places, outside of Raglan Road, to eat at in Orlando?

After a long day in the kitchen, what is a quick and easy dish you make at home – comfort food style?

Normally, my wife would have a nice Irish or Polish dinner ready when I’m home.  Or I’ll cook up a nice smoked sausage ratatouille or a quick and tasty pasta dish.

What are some upcoming plans for the restaurant?

We are focusing on menu development right now and plan for a new menu rollout sometime around August, so there’s lots of work to do on that!

You will have to wait — surprise!  Meanwhile, there are plenty of contenders on the current lunch, brunch, dinner and late-night menus, and we hope you’ll come out to try some of them. You can pair with one of our Irish gin cocktails, craft beers or whiskeys. We’ve a huge selection. And our live bands and Irish dancers will put on a great show for you!