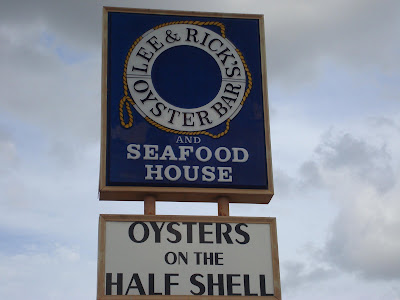 My friends and I had a craving for pounds and pounds of crawfish this late Friday afternoon and so decided to head west towards the Pine Hills area to get our fix before the crawfish season ends. As it turned out the place we were expecting to go unexpectedly was closed due to family emergency. 🙁

But luckily, having read urbanspoon.com and looking up reviews, we stumbled upon Lee and Rick’s Oyster Bar just down the street off of Kirkman and Old Winter Garden, where we would eventually consume pounds and pounds of oyster rather than crawfish.

At first appearances, Lee and Rick’s seems to be modeled after some sort of fishing-boat-trailer. Mad shady indeed. After entering the “boat” we walked through a dimly lit, semi-creepy hallway into the “ship’s den” or at least thats what it looked like inside. 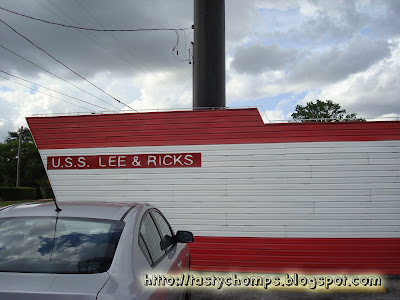 I’m on a motherf–kin boat 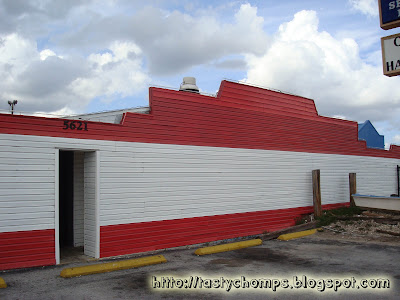 Once inside, one of the managers asked us if we would prefer to sit by the bar for the special bucketfuls of oysters ($17.95) for about 3-4 dozen oysters. The reason why we would have to sit by the bar is because they would shuck the oysters right there in front of you at the bar and after you’re done, you can shuck the oyster shells right back into the trough behind the bar.

At least they got straight to the point. Definitely not a date-joint.

When we first arrived, it was just our group in the whole place, but by the time we left half the bar would be full with people getting ready to slurp the little shell dumplings. We were told that on the weekends, there would be rows and rows of people lining up to sit there with the line wait of almost 2 hours at times. That would explain the ship’s crew of over 13 oyster shell shuckers that evening.

Our shucker was pretty accomodating, shucking away as she told us a bit about the history of the place. You see, next year Lee and Rick’s will be celebrating 60 years in Orlando, having first opened in 1950. The restaurant started out when the owners started selling oysters in the front porch of their house and when it grew to a success, they began to convert their house into the giant ship you see today on Old Winter Garden Road and Kirkman Road. Today the place is third-generation owned.

One of my friends ordered the fish dip to dip our crackers in. It was a great blend of white fish and seasonings and went really well with the crackers. A new favorite.

I ordered the crawfish appetizer ($6.95) since I still needed my crawfish fixin to satisfy. It definitely did the job, served spiced up and freshly boiled with a side of butter sauce. I liked how the hot cajun spices were done for these crawfish as they provided the necessary kick to the crustacean’s tastes. 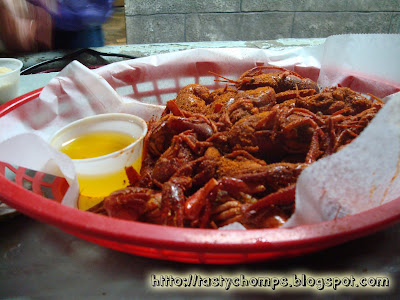 Crawfish or Bust!
The oysters arrived in the bucketful, all served with a side of crackers, horseradish, chili sauce, cocktail sauce or lemon butter sauce as you like it. The oysters were tasty with a slight wet salty flavor with some of them being some of the hugest oysters I have seen in my life time. Our shucker was quick and amiable to the shucking of the oyster shells and we devoured the oysters as quickly as she laid them out on the bar. Oh, the bar, I wondered to myself how sanitary all of this was since it looked so ancient after all…

But then that second passed and I decided hey you live only once and I’m pretty hungry enough that I would eat that off the table. 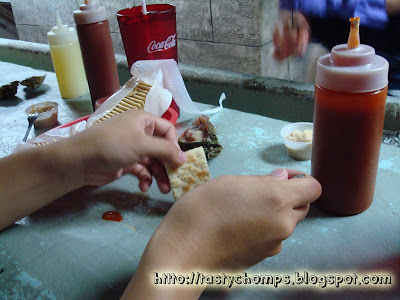 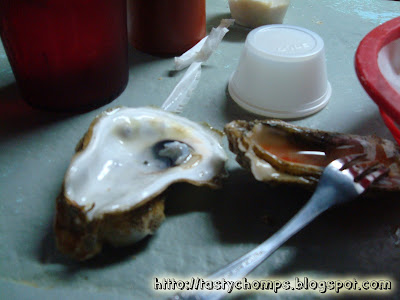