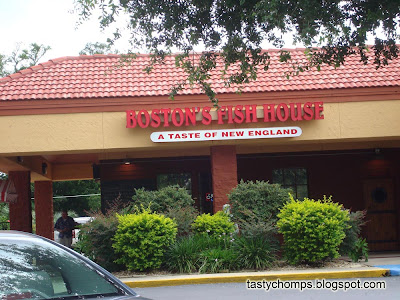 New England: one of the earliest settlements of America, dotted with seaside ports and harbors, home of Maine lobster, New England clam chowder, and other great American seafood fare.

This past weekend, after reading reviews for Boston’s Fish House on urbanspoon.com and also having a personal affinity towards seafood (something I partly owe to my Vietnamese descent), I decided to call up my brothers and met up for lunch at this Orlando area fried-seafood institution. Good food always calls for good company.

Boston’s Fish House has been operating in Central Florida for over 20 years now and after all these years, even on this rainy Saturday afternoon, you can see regular customers pouring in despite the rain outside.

Inside, a small statue of the iconic bearded-New Englander fisherman (resembling Ernest Hemingway?) greets customers as they arrive. The decor is an old fashioned New-England motif: old fashioned hardwood finish bordering the walls, various sports memorabilia of New England teams (plus one small banner at the entrance for the Orlando Magic), old-fashioned paintings of various seaside scenes from New England, and a huge mural towards the back of a New England dock. The place has a certain relaxed and feeling of home to it.

Here at Boston’s Fish House, you order and pay first at the cashier stall before sitting. No free loaders indeed.

There is a hustle and bustle to the kitchen; behind the revolving kitchen doors, waiters keep coming with more and more mountainous trays of fried and broiled seafood offerings. They hope to quell the restaurant patrons’ beckoning appetites.

I decided to share a meal with an old friend who I had known since middle school, Mike Cho. We were neighbors growing up, once sharing a wall in an old duplex during our childhood. We began by ordering an appetizer: the fried calamari rings ($6.50) accompanied perfectly by a rich, sweet and tangy marinara sauce. The portions were large and the calamari was good, despite being a tad uninspired for my tastes. 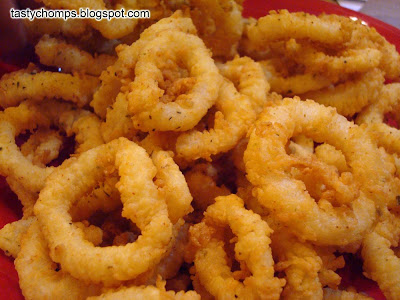 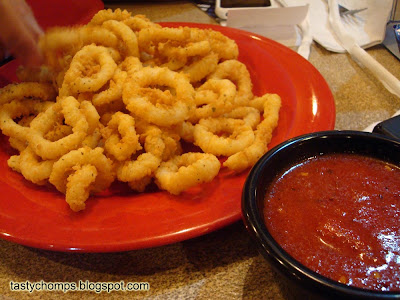 The Calamari Rings with a delectable marinara sauce

For the entrees, I ordered the Seafood Dinner Platter ($21.95) which came with fried sea scallops, cod fish, coconut maine shrimp, clams and onion rings with a side of potato salad and coleslaw. The platter was a formidable feat to finish. I particularly enjoyed the fried onion rings which were surprisingly light compared to my past experiences with the side at other places, a welcome change. I also enjoyed the delicious coconut maine shrimp which came with a sweet pineapple dipping sauce, and the lusciously plump sea scallops. The cod fish and clams were just okay. The accompanying cole slaw was fresh and tasty but I did not care much for their potato salad. 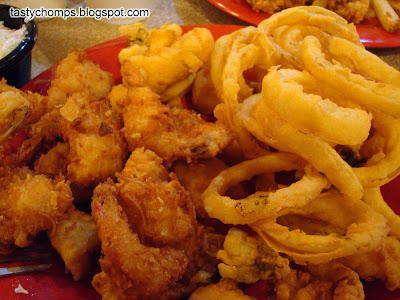 Mike ordered the 9oz Fried Oyster Dinner ($16.70) with a side of broccoli and french fries. I enjoyed the fried oyster as it came hot and fresh out of the kitchen with their special breading. It should be noted that their seafood is flown in fresh daily and they close between 3:25pm to 4:00pm to filter out their old oil and replace it with new cooking oil. That is dedication right there. 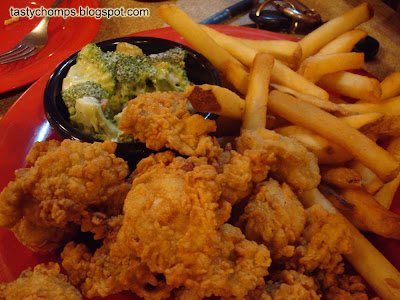 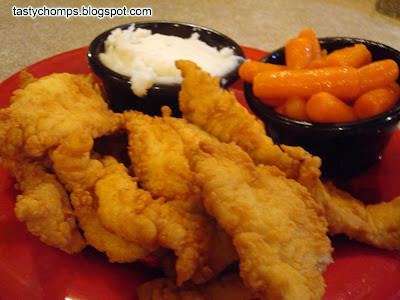 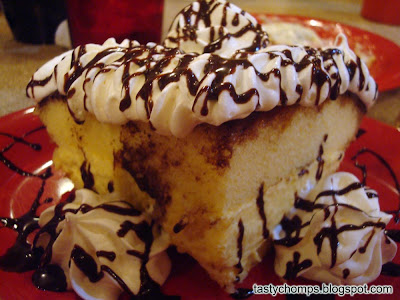 Boston Creme Cake
For dessert, we “share” a bite of the Boston Creme Cake, a stunning, fluffy and filling cake made with a sweet custard creme drizzled with chocolate sauce; a perfect ending to the meal.

Other recommendations include the New England classic: Lobster Roll ($22.95), but due to budgetary constraints we decided not to order it this time although it is highly recommended by guests here.

I would not recommend this place if you are on a diet though as most of their good stuff is fried.