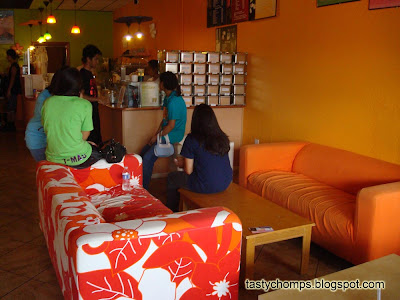 I remember one of my first nights here in Orlando, full of hopes and dreams, as a freshmen attending the University of Central Florida. It was my first time away from home, away from family, away from everything I had known the first 18 years of my life. Full of romantic idealism, I looked upon the City Beautiful and said one day, I will leave this place better than I had found it, and anything was possible.

I didn’t know then what paths lay ahead for me over the next few years, the struggles and the success, the friends made and lost, the endless nights of talking til the sun arose and awakened the earth for another new day.

On one of these nights I had driven to the Pine Hills Chinatown development where, tucked in a corner, was Lollicup Boba Tea and Coffee Zone, one of their first stores in Orlando. Quang Vu was the warm and friendly owner of Lollicup in Orlando, a business school graduate of UCF who set out to make it out on his own as an entrepreneur. I’d always admired him for that.

At this point, Lollicup had two stores in Orlando: one here at Pine Hills and another one at the Fashion Square mall. Every weekend, young and hip teens would get dropped off for the company of each other and a taste of the sweet and strange-yet-fun sensation of black tapioca pearls in flavored milk tea. Sip, slurp, and up the giant straws go the little black balls, surprising the mouth with its soft and chewy sensation.

Today, those stores have closed but Lollicup continues on at three different locations in Central Florida, one across from the Florida Mall on Orange Blossom Trail, one downtown on Colonial Drive near Mills Ave, and finally one in a plaza on the corner of Semoran Blvd and University Blvd in Winter Park.

On this occasion near the Winter Park location, we celebrate the grand opening of Reign, a streetwear boutique also started by a few alumni of UCF. After always awe-inspiring “step up 2 the streets”-like performance in the rain by Fresh off the Beat dance troupe, I decide to head over to Lollicup with a friend for an old favorite: taro milk tea with boba, a thick and purply nectar of the gods.

Inside, the decor is hip and playful, filled with colorful tones and influenced by the furniture of the chic and swedish Ikea store. A place to go to hang out and enjoy some tea, or slush, or coffee, or as TI once said, whatever you like. Today they also serve sweet and tart, frozen yogurt at Lollicup.

Our server Steven is quick and fast with the boba tea making skills and we get our drink in almost no time before the rush comes in.

My friend and brother Victor, who himself is a avid dancer and lover of boba tea, enjoys the first sip. 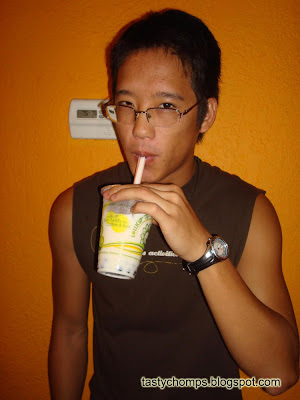 Victor Ma, a dancer of the legendary Tinikling, enjoys a sip of almond boba milk tea 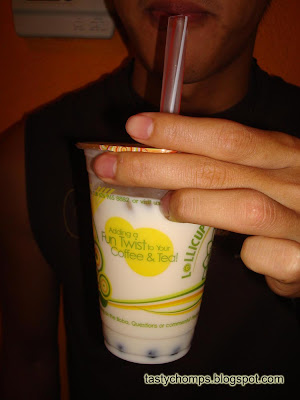 After all these years, the taste of Lollicup’s boba tea still remains the same: absolutely refreshing and delicious.

Special Features include: free wifi for your lap top needs 😀