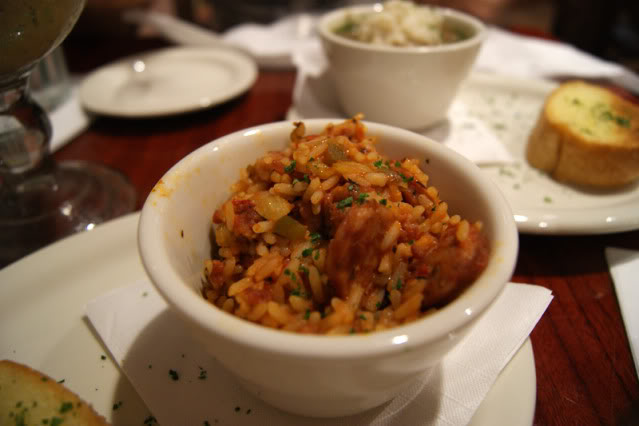 Tibby’s New Orleans Kitchen is the new restaurant on Aloma Avenue receiving rave reviews for their New Orleans style cajun cuisine. Its founders are the same guys that created Tijuana Flats, fellow UCF alumni who started their first restaurant just down the street on University Blvd and Dean Road. They have been quite successful with their Tijuana Flats concept and I am sure they will be successful with their new project Tibby’s New Orleans Kitchen (likely to become a franchise soon too?)

Located in Winter Park off of Aloma Avenue just east of Lakemont, its tucked inside the Publix plaza next to Aloma Cinema Grill and Mellow Mushroom. On the night that I arrived, they just celebrated their first month since their grand opening and the line was already out the door at 7pm. There was about an hour wait. (I’d recommend trying to make reservations if you are to go). The decor inside is a raucous, vibrant affair with deep purple and light green walls and a eclectic mix of New Orleans paraphernalia decking the walls, creating a festive and fun atmosphere. Our service was attentive and accommodating this evening at Tibby’s with no issues or complaints.

As someone who’s been to New Orleans on a few occasions and having the good fortune to try some real cajun food, I’d have to say that Tibby’s deserves props for trying their best to match the deep flavors of New Orleans. But maybe it was the items that I ordered on this visit that didn’t necessarily match the hype and at times I felt it was missing that cajun spice/flavor in some of their dishes.

For starters, we began with the oysters remoulade ($8), a tangy heap of fried oysters on top of a bed of lettuce and fit inside one of their goblets/chalice cups. It was battered and sweet, a enjoyable enough dish. We also ordered the andouille sausage jambalaya ($4.5 for cup) and seafood gumbo ($5), both of which we thought were a bit small for the price and untypically bland and sparse with meat. The jambalaya and gumbo both could have used some more spices to kick it up a notch. The crawfish pie ($9) was a favorite, served with some of the jambalaya rice, and featuring two meaty crawfish filled empanada pies. The shrimp creole ($11), however, was lacking in flavor; the sauce was reminiscent of a italian/mexican tomato salsa based sauce and the shrimp was hardly the jumbo sized mentioned in menu.

For dessert, we tried the single order of the beignets ($2.25) and some bread pudding ($5).  The beignets were fresh and flaky and definitely a must try if you are at Tibby’s.

Overall, I think Tibby’s is a good introduction to New Orleans cuisine, but alas has a ways to go. They also serve a wide variety of po boy sandwiches which I hope to try on another visit.

A Pimp cup of Oyster Remoulade

A Foodie’s Guide to Celebrating Mardi Gras and a Taste of...