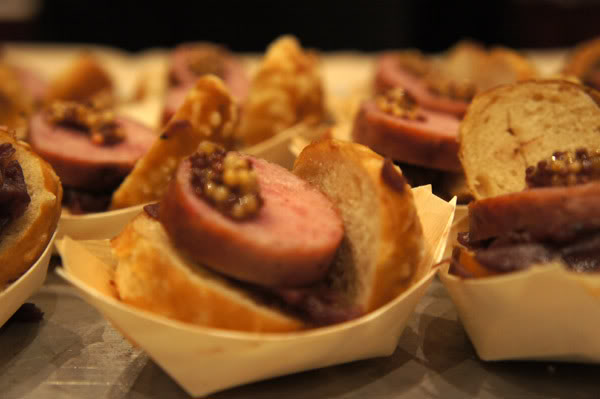 Share Our Strength’s Taste of the Nation is the nation’s premier culinary benefit dedicated to
ending childhood hunger in America. Each spring and summer, national celebrity chefs
and mixologists donate their time, talent and passion at nearly 40 events across the
United States and Canada with one goal in mind: to raise critical funds needed to help end childhood hunger.

This was my first time ever going to the Taste of the Nation event here in Orlando and I must say it is the foodie event of the year.

The Taste of the Nation Orlando was held at the Marriott Hotel at World Center Drive right outside of Epcot in a beautiful ballroom. Tables lined the ballroom with chefs and their foods, a silent auction for charity, and a center stage with live music and a friendly “cook off” competition featuring Creekstone Farm’s angus steak.

Over 35 restaurants from all over Central Florida presented “tastes” ranging from pork belly dishes, desserts, lobster tacos, bratwurst sandwiches, prime angus beef cuts, and much more all in the name of charity. Many of the dishes were truly outstanding, loaded with complex flavors, textures, and made from the utmost quality ingredients. I felt like I was in some foodie heaven.

Taste of the Nation 2011 Highlights


Last year, Coalition for the Homeless provided over 302,000 meals to homeless individuals
and families, including over 220 children each night with an average age of under 10 years old; Second Harvest Food Bank distributed more than 30 million pounds of grocery product,
the equivalent of over 20 million meals.

Some of my favorite items of the night and a few photos follow:

An absolutely amazing, fresh cup of seafood gumbo from Cress
Cress’ Chef Pulapaka is a 2011 James Beard Regional Award Nominee for the South

This guy was tall!!

Chef Jean-Louis’ Award winning Banana Foster from The Royal Plaza at Disney
My favorite dessert of the night!

Bratwurst on Pretzel bread with mustard seeds – The Ravenous Pig

One of my favorite dishes of the evening: Spicy Durban chicken with basmati rice, chutney, and papadum from Sanaa at Disney’s Animal Kingdom Lodge

MegaYummo workin it at the dessert bar!