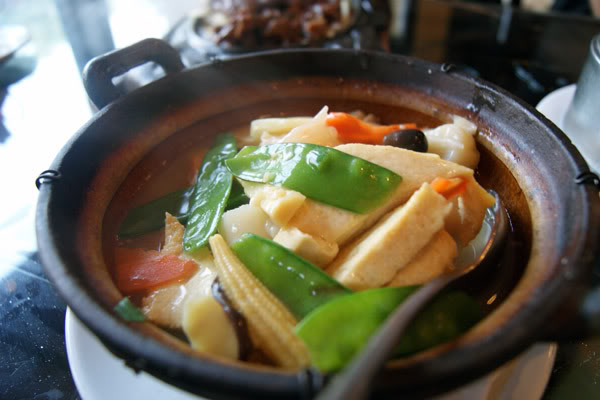 With two locations, one in Altamonte Springs and the other near the Orlando International Airport tucked off of a side street of Semoran Boulevard, Eastern Pearl is probably one of the better Chinese restaurants around town. It is actually a sit down Chinese restaurant rather than your typical “New York” style Chinese (what does that mean anyway? cheap and fast Chinese take out joint?), with a full menu of dishes ranging from Szechuan specialties to traditional fried rice and seafood tofu hotpot, as well as “Americanized” offerings of general tso’s chicken, etc. (thanks Rob!)

I recently visited the Airport location for Eastern Pearl to check out their offerings. Although it isn’t the best Chinese out there, it is passable if you are in the area looking for some Chinese fare.

The biggest surprise that I had was that Eastern Pearl served soup dumplings, Shanghai style dumplings filled with small amounts of piping hot soup that spewed out from the dumpling when you bit into them. The only other place that I have had these devilishly good dumplings was in New York’s Chinatown where they serve an excellent rendition of the dish. The dumplings here, though not as authentic or flavorful as the hand made ones in New York, were enjoyable enough. I would wait to go to NYC to try the real thing though.

We also ordered the sizzling pepper steak, a huge plate of slices of beef served literally sizzling on a hot plate. Also ordered was the seafood tofu hot pot, a tricky dish to master as it often comes out a bit bland in most Chinese restaurants. Here the dish was okay. Which is pretty much my thoughts for Eastern Pearl, an okay Chinese restaurant that is a bit of a hybrid between the traditional Chinese authentic restaurants and the more ‘Americanized’ Chinese places that have been popping up every where. Don’t get me started on all the new Chinese buffets in the area!

A look inside of Eastern Pearl