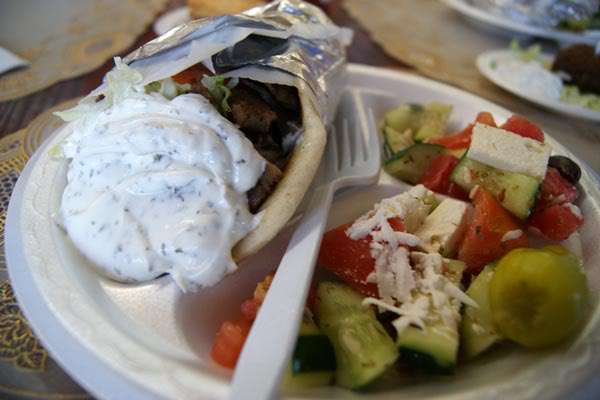 Inside, you’ll notice how bare the small place is: fluorescent lights humming above small cafe tables,  toward the back a counter for ordering, and the obligatory posters of attractive women eating some of Kronos’ finest gyro meats.

The owner here is a big hearted man who cares for his customers like old friends. Walking down to the order counter, you can pick your choices from the various salads laid out in trays and also order your gyro or wrap for eating in or to go.

I order the gyro platter with Greek salad. The owner cuts strips of the gyro meat rotating in the back and heats the heaping mass of Kronos meat on a press which is also used for the pita bread heating. A dab of tzatziki sour cream sauce and bundled up in some foil wrap. The gyro was delicious and overflowing with meat. Though flavorful, the meat might have been a bit dry that day as we were one of the first to visit that day. A special favorite dessert here is the baklava, homemade by the owner’s wife and made from some of the finest ingredients and phyllo dough this side of town. You must try it.

Though I have had better Greek salads and falafels elsewhere, overall, I would definitely recommend checking this place out if you are in the area for a quick bite or lunch.

Looking into the Mediterranean Deli and Gyros

Various combos and wraps are available

The counter with the salads