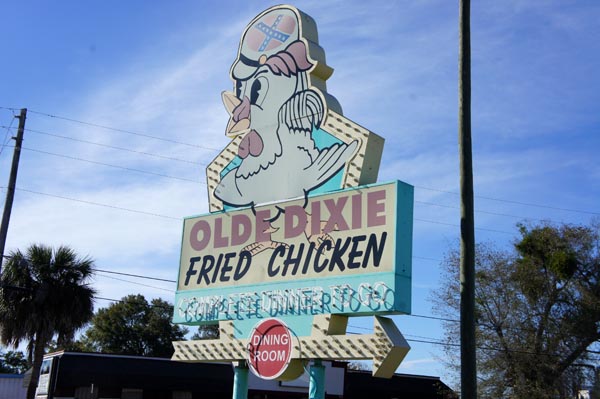 There are only a handful of land marks in Central Florida that, for whatever reason, have stood the test of time and lasted. Beefy King on Bumby Avenue, Lee and Rick’s Oyster Bar off of Kirkman Road, and Hot Dog Heaven on Colonial Drive stand out in my mind as a few olde Orlando classics, a mythic time period pre-dating the arrival of the Mouse to Orlando.

There is also Olde Dixie Fried Chicken, celebrating its 50th year this year, complete with its huge, colorful sign with a friendly chicken, licking its lips, beneath a Confederate rebel flag bedazzled cap. Yes, Olde Dixie is a proud southern chicken from times of the good old days of the Civil War. Just a reminder that we sometimes forget that Florida is technically, geographically at least, a Southern state, though usually not considered one  as we are pretty much a state of transplants from other states who have come to enjoy the Florida sun since the times of Henry Flager and John D. Rockefeller.

Anywho, Olde Dixie Fried Chicken sits on Orange Avenue about 5 miles south of downtown within the Pine Castle community (originally established in 1870). When you first enter, you immediately feel like you are in another time period, I think I felt transported back to the 1970s. Something in my mind just kept telling me, I should back away slowly…

But, the sound of crackling chicken coming from the deep fryer next to the counter allayed my concerns.

The kitchen is run by a group of women, they seemed like mothers, daughters, and grandmothers all together around the fryer area. You order at the counter where there was a single, simple paper menu of the various chicken pieces, sides, and choices.

You can dine at a table in an adjoining room where the decor probably hasn’t changed much since they first opened in the 1960s; various chicken memorabilia (somehow reminding me of the other, more refined chicken place up the street, Le Coq Au Vin) adorn the walls in the dining room.

I ordered a combo that came with fried chicken breast, a wing, and a leg as well as baked beans and french fries for the side. The french fries were nothing to write home about, and the baked beans were not much better, but they had a comforting familiar taste that I did not mind. The fried chicken was good, kind of like what you would imagine home-style fried chicken would taste. Certainly not the best ever, especially with the out-dated kicks, but it’s comfort food. Better than Kentucky Fried Chicken and Maryland Fried Chicken, on par with Bojangles, but not better than Popeye’s I would reckon.

It’s interesting to note what restaurants have stayed around for so long here in Orlando where it seems things can open and close on a dime. A trait that the older Orlando establishments seem to share is doing one thing, and doing it well. Just like succeeding in life.

The interior of the dining room at Olde Dixie Fried Chicken

It’s all about that fried chicken y’all.