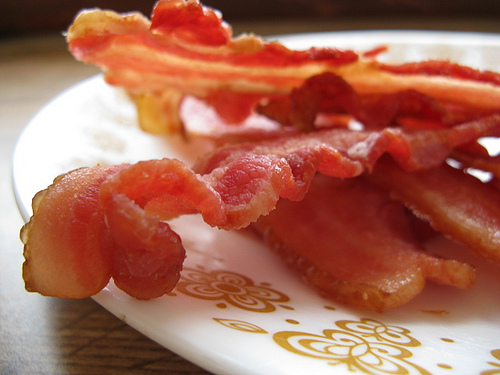 It all started a few months ago, with light jabs and sparring via twitter (#baconswag).

Now the Bacon Off is on between two of some of the best food trucks in Orlando:

This Father’s Day June 17th noon-4pm,  the battle will be over which truck has the best house cured and house smoked bacon from a worthy list of categories:  Best Original Bacon, Best Novelty Bacon, Best Bacon Side, Best Bacon Product, and Best Grand Champion.

As a first event of it’s kind in Orlando, the $30 ticket price includes a bacon sampler plate from each truck, with tastes of bacon in 5 different categories; guests will vote on their favorite, and the winner of each category receives bacon bragging rights. Ticket price also includes access to a bacon-filled buffet and a free beer.

Tickets are $30 each, and can be purchased at www.baconofforlando.com. Tickets can also be purchased directly from the Big Wheel Truck or the C&S Brisket Bus during service hours.

The competition takes place at the new East End Market in Audubon Park. To be opened in late 2012, the East End Market will be an indoor farmer’s market, open to the public 7 days a week, and will also feature a commercial kitchen, restaurant, event space, office space and adjacent outdoor garden.

Let’s get tummies ready to RUMBLE.

About:
Big Wheel Food Truck: With a mission to feature the best of Central Florida’s locally sourced food, the Big Wheel Truck rolls around Orlando 6 days a week, bringing handmade, locally sourced food to the masses. Within a year of opening, Big Wheel was named 8 times “Orlando’s Best Food Truck, featured on The Cooking Channel’s Eat Street, the cover of the Orlando Sentinel, the cover of Orlando Weekly, filmed a commercial with Square, and featured in countless Orlando blogs and magazines. www.bigwheeltruck.com www.bigwheelprovisions.com
C&S Brisket Bus: Mobile Gourmet Delicatessen. We cure. We smoke. We braise. Fresh baked bread. House made condiments. Generous portions. http://www.facebook.com/CSBrisketBus
Burger Beast: Sef Gonzalez, better known as Burger Beast, is a respected South Florida Food Blogger, with national reach, who writes about unique food experiences. Although his blog was originally created to find the best burger in Miami, it now represents a publication with the aim to shine light on the often overlooked, undiscovered, and unappreciated culinary gems of South Florida and other noteworthy destinations. Burger Beast has also written for Broward New Times, edible south Florida, The Miami Herald and Ocean Drive Magazine. www.burgerbeast.com