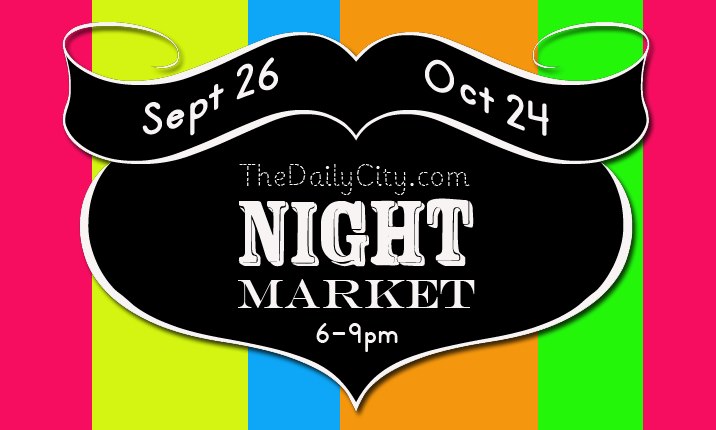 TheDailyCity.com, which brought the city of Orlando events such as The Food Truck Bazaar, Orlando Improv Festival, Audience Choice Awards and Mobile Art Show, is bringing a new event currently titled “TheDailyCity.com Night Market” to Orlando, in partnership with Waterford Lakes Town Center. It will have a two-month experimental run. TastyChomps spoke with Mark Baratelli, producer of TheDailyCity.com, and talked about their upcoming project.

Location:
Waterford Lakes Town Center, between the movie theatre and Pier One Imports

Tasty Chomps: What made you want to start a night market?

Mark Baratelli: I brought my “The Food Truck Bazaar” event to Waterford Lakes and it went very well. Afterwards, they asked if I knew someone I could recommend to revive their farmers market. I thought, “What about me?” Maybe I could take what I’ve learned doing 70+ iterations of “The Food Truck Bazaar” over the past year and a half and use it towards markets. They originally wanted a farmers market, but I shared with them my vision for something different, and they were very much excited about it. So I got excited. Fingers crossed all goes well!

I am modeling the vendor selection on what I saw in New York City. I liked Hells Kitchen Flea Market and The Brooklyn Flea. I like a mix of vendors that provide antiques, vintage clothing, artisan specialty food and some unexpected stuff mixed in.

TC: What do you envision the night market to be like?

MB: The first couple will be small. Around 11 or so vendors. Its a night, so no tents. It should look like a farmers market at first glance. but when you walk up to the table, you should be surprised. Vegan donuts? Artisan marshmallows? Custom screenprinted posters? Fun, eclectic and unexpected. We’ll be in a parking lot, much like at The Food Truck Bazaar, so there’ll be plenty of free parking. Folks should be able to hope out of their cars, check out the merch, and maybe find a little something they didn’t know they needed.

TC: What should attendees expect?

MB: The form factor is a farmers market. The merch on the tables should take people by surprise. I hope! I want people to browse and leave happy knowing that their city is more creative than they might have been aware of.

Waterford Lakes and I have a history. Its short, but its there. And I am happy to be working with them again. I did one of my “The Food Truck Bazaar” events there, and I very much think the space is great. So when they brought up the idea of a farmers market, I thought it would be a great space to do something unique, like this night market idea I proposed to them. So happy they went for it.

MB: What are some cool vendor items that you can find only at the night market?

You can find the items these vendors will be selling at other locations, but not at other markets. Lure Design is a graphic design and print house. Adjectives is an 80-vendor antique market in Altamonte Springs. Other Peoples Property puts on giant “Swap & Shop” events and does person one-on-one styling. The Book Worm is a small shop in the Milk District. Lollypops & Pistols is Orlando’s FIRST fashion truck. Mobile Art Show is an art show on wheels. While most of this can be found elsewhere, having it all in one place is what makes the market unique.

TC: Are you excited about the “local” Orlando movement? Where do you see the local movement going?

MB: Local, as Tony Adams of Big Wheel Provisions says, is lovely. But the focus for TheDailyCity.com Night Market isn’t on local. Its on good. Its on quality. Its on creativity. And that can come from anywhere. Why not celebrate a person from Tampa or Jacksonville or New Smyrna Beach? This isn’t a locals-only affair. Its an interesting-only affair. Ideas are everywhere and I do not believe in limiting myself or the guests to just those vendors who happen to live in Orlando.

TC: Will there be food at the event? If so, what vendors will be there?

MB: The food offerings are snacks and gifts, not full on meals:

TC: Why do you think your events like the Food Truck Bazaar are so wildly popular?

MB: Its all about the food. I don’t do bounce houses or live music or video game trucks or face painting or balloon animal twisters or any of that. All of that is well and good in certain contexts, but when I am trying to make people focus on the food, that stuff can be a distraction. This is not a fair. This is about the appreciation of food, mobile food vendors, small businesses. Your kid will have fun without all that other stuff. I keep it simple. Bring your chair, bring your friends, grab some food, sit on a sidewalk or the tailgate of your truck, and eat togther outdoors with your community. Its about eating together. People like it. I also think people appreciate the curated aspect of The Food Truck Bazaar. I don’t let every food truck in. I do give those that aren’t fully prepared a chance. If they can learn from the other truck owners and improve, they stay. If not, they go. There’s a lot of choosing, tasting and truck selection that goes on behind the scenes that no one sees. These trucks don’t just pop up in your town and just happen to all be high quality. Thats my job. I make sure that happens.

TC: Who are your role models if any?

MB: Craig Ustler and Ryan Seacrest. Mr. Ustler had me for lunch one day with him and his team and three hours later, I found my hero. He is so smart and quick. He knows so much. But here’s what differentiates him from many, many others I deal with: he listens. He listened to me, some guy with food trucks in a parking lot. Some guy with a blog. I mean, Mr Ustler builds buildings for a living. He’s the lead on the Creative Village. And yet he took the time (three hours!) to listen to me and ask me questions. I won’t forget it. When I work with others and see their lack of listening, I think back to Mr Ustler. My other role model is Ryan Seacrest. He took one hosting gig and turned that one opportunity into an empire. Radio shows, tv reality shows, tv hosting gigs. Its unbelievable what he’s accomplished in the time he’s been in Hollywood. Maybe he has a powerful uncle? I dunno. I just really admire people who just go for it.