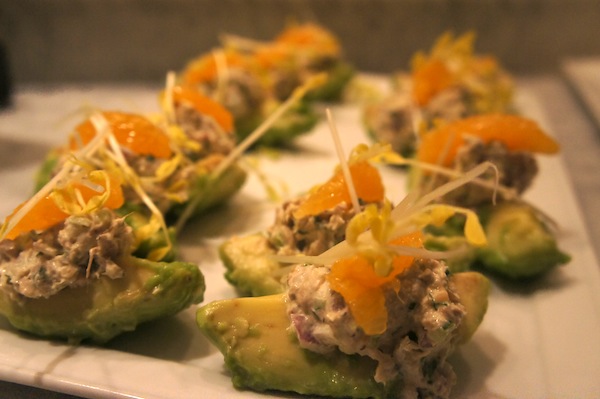 The airport code for the Orlando International Airport – rather than OIA as you would think – is represented by the letters  MCO. The code stands for the airport’s former name, McCoy Air Force Base, named for the late Colonel Michael Norman Wright McCoy.

McCoy’s Bar & Grill restaurant located at Hyatt Regency Orlando International Airport (and also named for the late Colonel) was recently redesigned with a hip, ultra-modern look with natural bamboo flooring and day lighting, dark wood finishes and a soft earth tone color palette. I was invited recently for a media event to check out the new digs as well as the surprisingly pleasant “local” menu on board.

The interior renovation was handled by CCS Architecture, a firm that has gained international acclaim for its restaurant projects. Other features include open kitchen concept; high-definition, flat panel televisions; private dining areas; two high-top communal tables fitted with outlets for guests to recharge their communication devices; complimentary Wi-Fi; and a well-stocked bar featuring an extensive selection of wines by the glass that complement the menu, draft and bottled beers, and signature, popular and non-alcoholic beverage options.

An expanded, free-standing sushi bar  features custom-made selections prepared by a classically-trained Japanese sushi chef led by Chef Hiro Masaki. Menu features Nigiri and Maki Sushi, Traditional Rolls, a selection of appetizers and entrees including a seasonal pre fix Bento box. Much of the fresh fish served at McCoy’s and used in the sushi bar arrives at the restaurant straight off the runway after being flown in from other locations.

When people think of food at the airport, they hardly remember that McCoy’s and its sister restaurant Hemisphere both located in the Hyatt Regency at the Orlando International Airport, can be an elevated culinary experience while you await the next flight.

The updated menu blends Hyatt’s Food. Thoughtfully Sourced. Carefully Served. global food initiative with the unique needs of airport visitors. The new menu raises the bar for traveling diners while providing sustainable and responsible food and beverage choices and does so with true vigor, enough to make any “locavore” salivate for a dish.

Some dish highlights here at McCoy’s include:

Chef David Didzunas is a graduate of The Culinary Institute of America in Hyde Park, New York. He started his career with Hyatt Hotels in 1981 in his hometown of Pittsburgh, Pennsylvania. From there, he held chef positions at properties in Dallas, Washington, D.C. and Atlanta, and was executive sous chef for the Hyatt Regency Grand Cypress and executive chef for the Hyatt Charlotte at Southpark in North Carolina. In 1997, he was appointed executive chef for Hyatt Regency Orlando International Airport. Didzunas stays in touch with the latest trends in food and wine by traveling to Spain, Itlay and various parts of the United States.

Two Local Women challenge you to the 90 Day Eat Local...